According to new research, early Mars was wet, but rarely warm.

Grau Galofre and two colleagues compared the shapes of erosion-cut valleys on Mars with their counterparts on Earth, and in Nature Geoscience they report that much of the water that sculpted the Martian surface flowed under glaciers — rather than in surface rivers as had been thought. When the glaciers retreated during intermittent warm spells, rivers flowed from the base of the ice sheets across the surface and cut channels of different shapes.

Decades ago, maps of the Martian surface revealed networks of channels that look like river valley networks. The features led many to think that flowing surface water had shaped the landscape of the Martian highlands 3.9 billion to 3.5 billion years ago.

Yet Grau Galofre was not convinced that surface rivers had flowed freely on a warm and wet Mars. She found the reasoning circular, because scientists had used models based on fluvial flow to determine how surface channels could have formed. Further doubts came from the inability of three-dimensional climate models to reproduce a warm and wet young Mars.

Subglacial flows are an alternative to rivers on the surface. And they’re on Earth, too. Those that exist now under the Antarctic and Greenland ice sheets are largely inaccessible, but the retreat of glaciers from North America at the end of the last ice age left many subglacial features exposed, such as the Finger Lakes of western New York. Grau Galofre did field work on lesser-known set of exposed subglacial channels on Devon Island at 75°N in the high Canadian Arctic.

As the world’s largest uninhabited island, it’s a harsh place, and scientists have used it before as an Earth analog for modern Mars. With Mark Jellinek (Arizona State) and Gordon Osinski (University of Western Ontario, Canada), Grau Galofre found distinctive subglacieal features on the island, including long, narrow parallel branches that come together like fingers on a hand.

The three researchers compared these features to other water-cut terrestrial channels and developed metrics to classify four distinct types of valleys: those formed by open-flowing rivers, by meltwater from glacial edges, by sub-glacial flows, and by “sapping” flows originating from groundwater sources. Then they applied these metrics to trace the origins of more than 10,000 Martian valleys comprising 66 valley networks — the equivalent of terrestrial drainage basins. 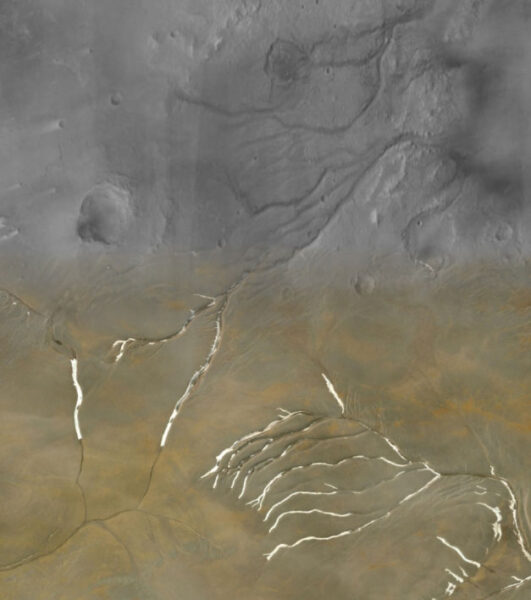 This collage shows Martian valleys (top) and Devon Island channels (bottom). The similar shape of the channels and the overall network is striking.
Cal-Tech CTX mosaic and MAXAR / Esri

Of these networks, 22 showed the hallmarks of fluid erosion under the pressure of thick glacial ice sheets, such as groups of finger-like branches separated by long flat areas with few branches. Another 14 valley networks exhibited complex patterns of tributaries and relatively narrow width of river networks. Nine networks had narrow channels 3–5 km (2–3 miles) wide and other features associated with retreating ice sheets, which may overlay subglacial features that formed earlier. Only three valley networks looked like true groundwater flows, though the model could not pin down the origins of the remaining 18 networks.

Martian features are dated by counting craters impinging on them, but that’s hard to extend to glaciated areas because we don’t know how well the impacts would have penetrated the ice. While the age of the valleys isn’t known, Grau Galofre speculates that they formed at different times. The subglacial channels formed during cold periods, when water flowed under thick ice sheets, eventually reaching the edges of the ice. “When the ice retreated, you would have had rivers,” she says.” But she doubts Mars ever became really warm. Instead, Mars “was always pretty much a frozen world [where conditions changed] from more to less frozen, but not to thawed,” she says.

An icy Mars need not be lifeless, Grau Galofre says. She points out that a subglacial environment would hover around the freezing point for an extended time, which would protect any life from dramatic temperature variations as well as intense solar radiation. Microbes have lived in the subglacial Lake Vostok, under 4 km of Antarctic ice, for millions of years. Perhaps chilly Martian slush would make a good home for simple organisms.

Others have suggested non-fluvial origins for Martian channels, but Jeffrey Kargel (Planetary Science Institute), who was not involved in the study, praises the team for a “great quantitative analytical approach [that] allowed their interpretation of origins to fall out from the statistical analysis.” He thinks closer analysis of the 18 “undifferentiated” networks might reveal that they were places where one process overprinted the other, like outflow from a melting glacier might cover a channel eroded by subglacial flow after the glacier had melted.

Yet we have barely scratched the surface of Mars compared to our detailed examination of terrestrial deposits, leaving many important questions unanswered. Victor Baker (University of Arizona), who was also not involved in the study, points out that other phenomena occurring on Mars during the formation of the valley networks are consistent with warm and wet conditions. NASA’s Perseverance rover is now on its way to Mars to explore other aspects of its geology that will hopefully cast more light on how warm and wet Mars was in its early days.

Mars landings: ‘7 minutes of terror’ | Human World
Is there life below the Martian surface? | Space