Comet SWAN: Yet another dud crumbles away. Comet SWAN (C/2020 F8) has unexpectedly plummeted in brightness down past 6th or 7th magnitude, instead of brightening to the 3rd magnitude as was predicted for its approach to its May 27th perihelion.

■ The Venus-Mercury pairup. Showy Venus and demure little Mercury are still close together low in the west-northwest in twilight, as shown below, following their conjunction yesterday. This evening they’re 1.7° apart.

How fast they move! Venus is heading down toward the lower right day by day, while Mercury is ascending to the upper left. (The visibility of objects in bright twilight is exaggerated here.)

■ Venus is a super-thin crescent as it plunges down to the sunset horizon this week. Bring out the telescope and/or binoculars. Mercury in contrast, is a tiny “half Moon” with a much lower surface brightness.

The early days of this week are your last and perhaps best chance to try to resolve the crescent with your unaided eyes. Having mere 20/20 vision isn’t good enough; this is for the more eagle-eyed. Start trying at or even before sunset, as soon as you can detect the planet low in the west-northwest. Try during different stages of twilight, before the glare of the tiny, bright planet on a too-dark background turns it into a mess. Look long and carefully and report your results to Sky & Telescope’s Bob King, nightsky55@gmail.com, as urged in the May issue, page 49.

You may improve your chances by sighting through a clean, round hole in a stiff piece of paper 1 mm or 2 mm in diameter (try both). This will mask out optical aberrations that are common away from the center of your eye’s cornea and lens.

■ A twilight challenge: As soon as you can see Venus this evening, start looking lower left of it for the very thin crescent Moon hardly more than a day old (see the date and time of new Moon just above). The Moon and Venus are 4° or 5° apart during twilight for North America. Here’s the arrangement as seen from the middle of the continent, and it will vary only a little for the rest of the US and Canada: 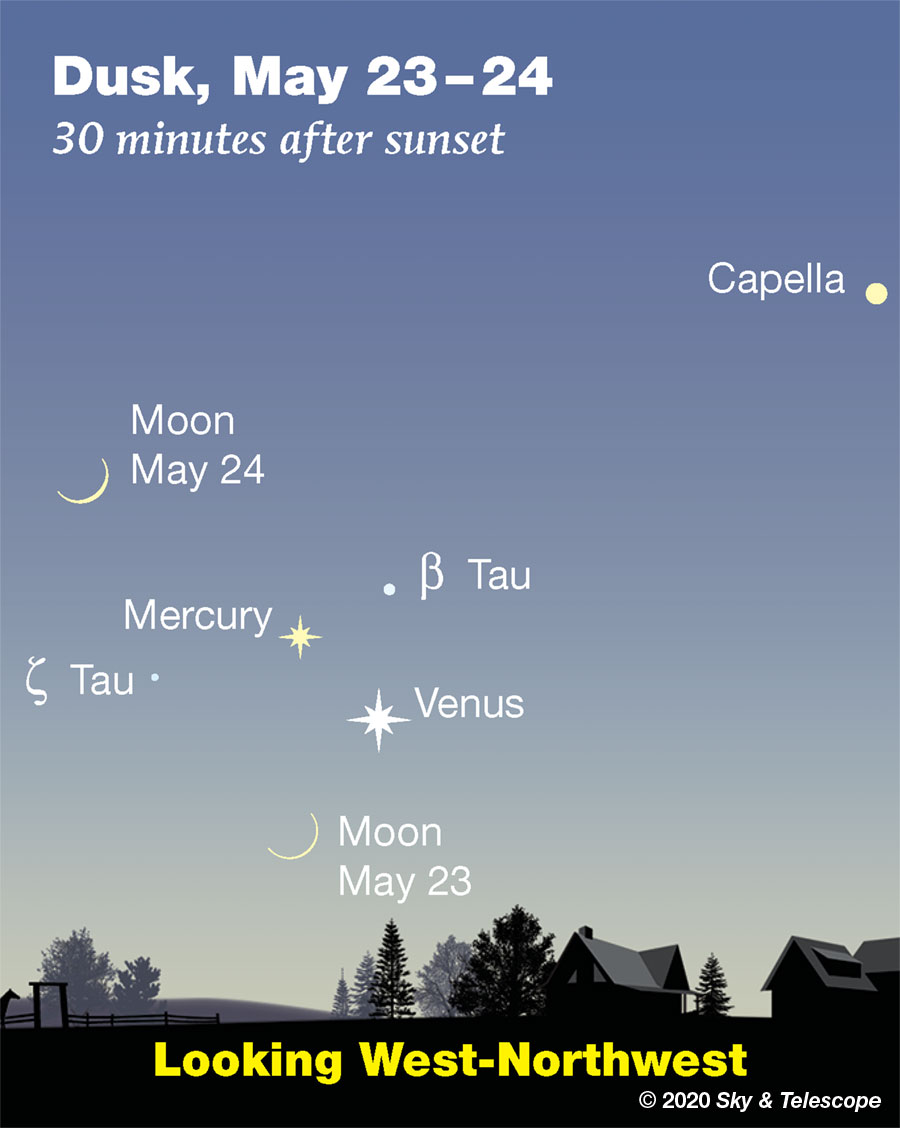 The thin crescent Moon now makes its monthly reappearance, while Venus and Mercury above it form a nice triangle with much fainter Beta Tauri (magnitude 1.6). That triangle, which changes from day to day, is now 3° or 4° on a side. The Moon here is drawn three times its actual apparent size, and the visibilities of faint objects in bright twilight are exaggerated. Look carefully!

■ Now the thicker crescent Moon hangs upper left of Mercury and Venus. It aims its sunlit edge almost straight at them, as shown above.

■ Look west for the crescent Moon after dusk. About a fist at arm’s length above it are Pollux and Castor, the Gemini “twins.” They’re not identical twins. Pollux, on the left, is slightly brighter and tinted pale orange.

■ Vega is the brightest star in the east-northeast after dark. Look upper left of it by 14° (about a fist and a half at arm’s length) for Eltanin, the nose of Draco the Dragon. Closer above and upper left of Eltanin are the three fainter stars of Draco’s stick-figure head, also called the Lozenge. Draco always points his nose to Vega, no matter the season or how they’re oriented. He seems curious about it. Dragons are supposed to have a thing for jewels. . . .

The faintest star of Draco’s head, opposite Eltanin, is Nu Draconis. It’s a fine, equal-brightness double star for binoculars: separation 61 arcseconds, both magnitude 4.9. This is definitely a true binary; Nu-1 and Nu-2 are both 99 light-years away, and they share a common proper motion against the more distant starry background. Both are hot, chemically peculiar type-Am stars somewhat larger, hotter, and more massive than the Sun. They await your attention higher and higher overhead as the night progresses.

■ Now the waxing crescent Moon poses in a roughly horizontal line with Pollux and Castor, which shine to its right.

■ Have you ever seen Alpha Centauri? At declination –61° it’s permanently out of sight if you’re north of latitude 29° N. But if you’re at the latitude of San Antonio, Orlando, or points south, Alpha Cen skims just above your true southern horizon for a little while late these evenings.

When does this happen? Just about when Alpha Librae, the lower-right of Libra’s two brightest stars, is due south over your landscape. At that time, drop your gaze down from there.

■ With summer just three weeks away (astronomically speaking), the last star of the Summer Triangle rises above the eastern horizon at the end of twilight. That’s Altair, the Triangle’s lower right corner. Its highest and brightest corner is Vega. The third is Deneb, sparkling less far to Vega’s lower left.

■ The Moon shines under the Sickle of Leo after dark. The Sickle runs from Regulus, its handle-end left of the Moon, to its dimmer hook at the Moon’s upper right (for North America).

■ First-quarter Moon, exact at 11:30 p.m. Eastern Daylight Time. As the stars come out the Moon is high in the southwest, below the belly of Leo’s stick-figure lion pattern. The Moon forms a nearly equilateral triangle with Leo’s Regulus to its lower right and Gamma Leonis (Algieba), slightly fainter, more directly to the Moon’s right, depending on your location. The triangle is just about perfectly equilateral, 8° on a side, at the time of late twilight for the East Coast of North America. 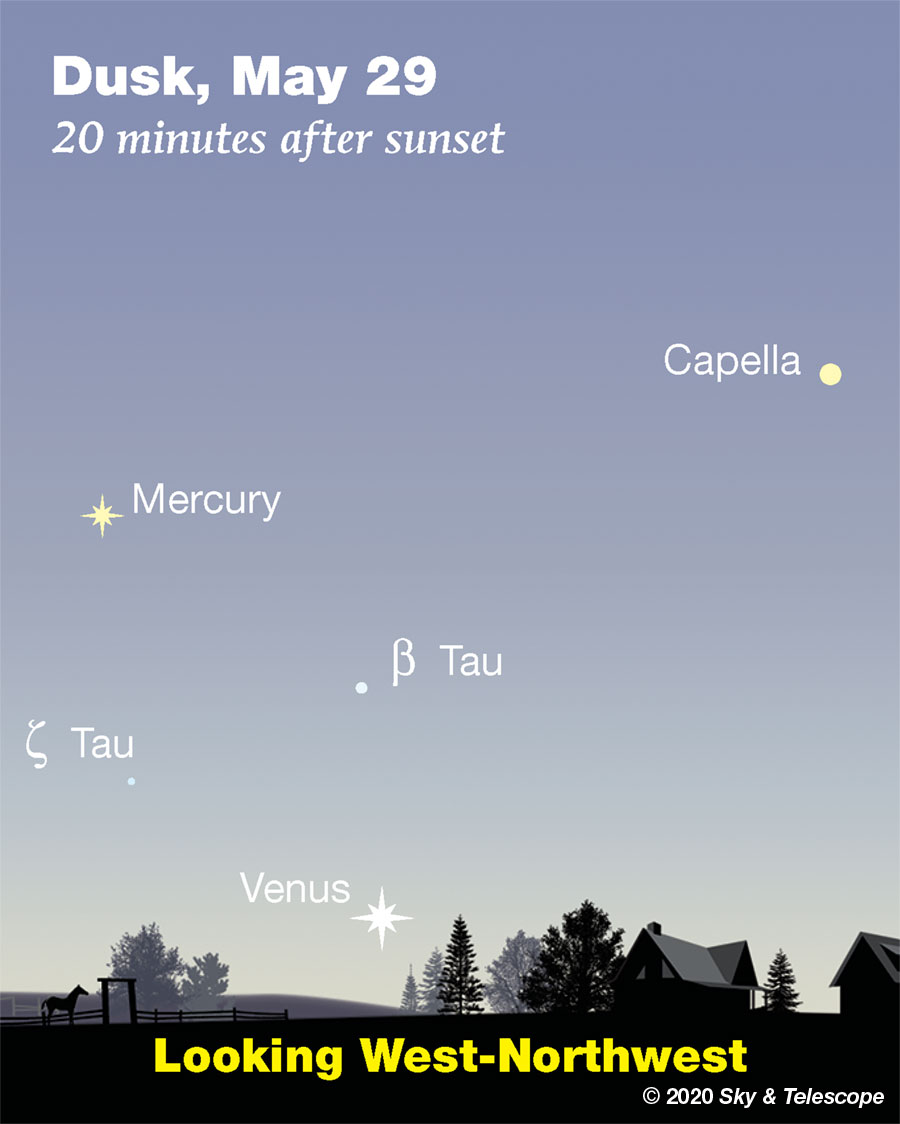 Wave goodbye to Venus, just five days from its solar conjunction. But in less than a month it’ll be jumping up in the eastern dawn.

■ Bright Capella is still up in the northwest in twilight, as shown above, but it sets in the northwest fairly soon after dark (depending on your latitude). That leaves Vega and Arcturus as the brightest two stars in the evening sky. Both are magnitude 0. Vega shines in the east-northeast. Arcturus is very high toward the south.

A third of the way from Arcturus to Vega, look for semicircular Corona Borealis, the Northern Crown, with 2nd-magnitude Alphecca as its one moderately bright star.

Two thirds of the way from Arcturus to Vega is the dim Keystone of Hercules, now lying roughly level. Use binoculars or a telescope to examine the Keystone’s top edge. A third of the way from the edge’s left end to the right is 6th-magnitude M13, one of Hercules’s two great globular star clusters. In binoculars it’s a tiny glowing cotton ball. A 4- or 6-inch scope begins to resolve some of its speckliness. Located 22,000 light-years away far above the plane of the Milky Way, M13 consists of several hundred thousand stars in a swarm about 140 light-years wide.

Mercury is having a nice apparition in evening twilight. Look for it in the west-northwest, farther upper left of bright Venus every evening. (By week’s end Venus has all but dropped out of sight.) Mercury fades this week from magnitude –0.6 to 0.0. In a telescope it is a tiny “half Moon” shape 7 arcseconds in diameter.

Venus is dropping fast! It shines brightly in the west-northwest in twilight, falling farther away from fainter Mercury each evening as it heads toward its June 3rd conjunction with the Sun. You’ll probably lose it by week’s end. In addition, Venus fades from magnitude –4.3 to –3.8 this week as we see less and less of its dayside.

Get your telescope on Venus as early as you can pick it up, perhaps even before sunset. It’s a big, thin, brilliant crescent: enlarging from 54 to 57 arcseconds in diameter this week, while slimming from a 5% sunlit fingernail-trimming of a crescent to a hairline 1%! 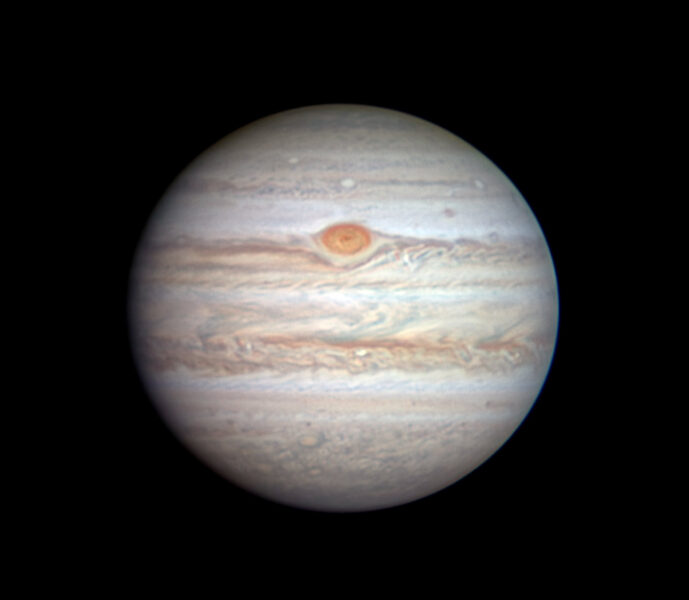 Jupiter’s Great Red Spot was on the planet’s central meridian (System II longitude 331°) when Christopher Go took this image on May 5th. He stacked many R, G, and B video frames taken separately with a 14-inch scope in near-perfect seeing. South is up. For the daily doings of Jupiter’s moons and their shadows, and predicted central-meridian transit times for the Red Spot, see the current month’s issue of Sky & Telescope, in the Celestial Calendar section.

Jupiter, the brightest, is on the right. Saturn glows pale yellow 4° to Jupiter’s left. They both rise now around midnight daylight-saving time, depending on your location. They straddle the border of Sagittarius and Capricornus.

Mars, in dim Aquarius, is far (35° to 40°) to the left of Saturn as dawn begins. It has been slowly brightening and enlarging. In a telescope Mars is now 9 arcseconds wide: a little gibbous disk. Mars is on its way to an excellent opposition in early October, when it will reach an apparent diameter of 22.6 arcseconds. 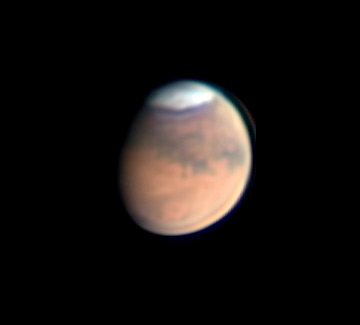 Mars on May 5th, imaged in excellent seeing by Christopher Go from the low latitude of Cebu City, Philippines, using video-frame stacking through a 14-inch scope. South is up. Don’t expect this kind of view visually! But even a much smaller scope will show Mars’s gibbous shape (85% sunlit this week), its currently huge South Polar Cap, and perhaps traces of its dark surface markings. We’re looking here at the planet’s Mare Cimmerium side. (The thin dark arc inside the lower limb is an imaging artifact.)

Uranus is hidden in the glow of dawn.

Neptune (magnitude 7.9, in Aquarius) is fairly low in the east-southeast before dawn begins.

All descriptions that relate to your horizon — including the words up, down, right, and left — are written for the world’s mid-northern latitudes. Descriptions that also depend on longitude (mainly Moon positions) are for North America.

Want to become a better astronomer? Learn your way around the constellations. They’re the key to locating everything fainter and deeper to hunt with binoculars or a telescope.

This is an outdoor nature hobby. For an easy-to-use constellation guide covering the whole evening sky, use the big monthly map in the center of each issue of Sky & Telescope, the essential guide to astronomy. 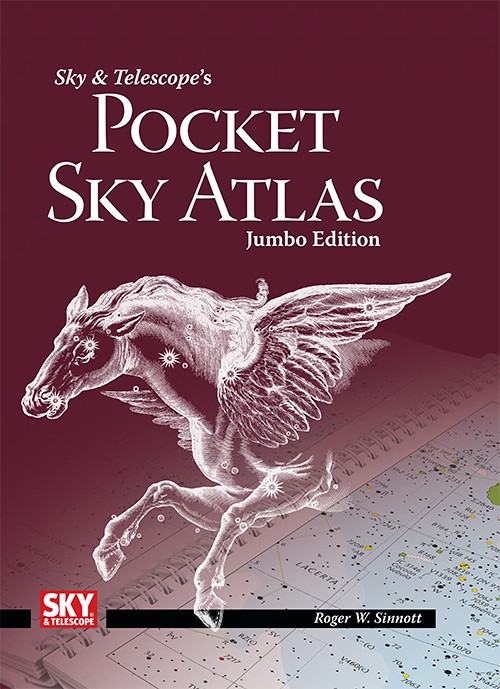 The Pocket Sky Atlas plots 30,796 stars to magnitude 7.6, and hundreds of telescopic galaxies, star clusters, and nebulae among them. Shown here is the Jumbo Edition for easier reading in the night. Sample chart.

Once you get a telescope, to put it to good use you’ll need a detailed, large-scale sky atlas (set of charts). The basic standard is the Pocket Sky Atlas (in either the original or Jumbo Edition), which shows stars to magnitude 7.6.

You’ll also want a good deep-sky guidebook, such as Sky Atlas 2000.0 Companion by Strong and Sinnott, or the bigger Night Sky Observer’s Guide by Kepple and Sanner.

Can a computerized telescope replace charts? Not for beginners, I don’t think, and not on mounts and tripods that are less than top-quality mechanically (meaning heavy and expensive). And as Terence Dickinson and Alan Dyer say in their Backyard Astronomer’s Guide, “A full appreciation of the universe cannot come without developing the skills to find things in the sky and understanding how the sky works. This knowledge comes only by spending time under the stars with star maps in hand.”

Audio sky tour. Out under the evening sky with your earbuds in place, listen to Kelly Beatty’s monthly podcast tour of the heavens above. It’s free.