A solar table that charges an internal battery to power an integrated Bluetooth speaker while wirelessly charging your phone has limited appeal — especially when it costs $349. But as ridiculous as it sounds, the Suntable is convergence done right. It’s for anyone with means looking to improve their outdoor living situation on a patio or balcony, for example, without having to run an extension cord.

And with most of us planning to spend the summer at home, thanks to COVID-19, the Suntable couldn’t have launched at a better time.

I want a Suntable. The person in charge of The Verge’s reviews program, Dan Seifert, does not. In fact, Dan thinks it’s stupid. Dan is wrong, and I’m happy to explain why.

In Dan’s defense, I might be the one who’s nuts, having just emerged from months of COVID-19 lockdown in a big scary city. The stress and boredom were enough to motivate me to complete some home repair and renovation jobs I’d been putting off for years. One big job was the demolition of a rotting terrace on my roof to give my family of five some additional private space to use while under quarantine. With that new blank canvas, I’ve had time to think about how I’d like to furnish it within the constraints of budget and ability. That’s when I discovered the Suntable from ShadeCraft.

ShadeCraft is a small technology and robotics company based in Pasadena, California, that makes products for outdoor living. Up until now, it’s been known primarily as the company that makes a $10,000 solar-powered parasol that automatically opens, closes, rotates, and tilts to always keep you in the shade. Some models have voice control and integrated speakers and lighting. The Suntable isn’t nearly that ambitious.

The Suntable starts with a 12-inch diameter tabletop solar panel protected by a white polycarbonate shell that won’t discolor with age, the company says. I like the look of it, but I also like translucent cases that show off a gadget’s guts. My wife says that she “doesn’t mind” seeing the solar cells and likes the modern aesthetic overall. I’d call that a win.

ShadeCraft tells me that the solar panel can fully charge the 37.45Wh lithium-ion battery after about four hours in the sun. I have no way to know this because the first-generation Suntable lacks any type of battery meter. A future Suntable v2 will work with an app that will include a battery meter, I’m told. Not that it really matters; I’ve yet to deplete the battery on my review table since I first set it outside over a week ago.

The battery powers both a 20-watt, 360-degree firing Bluetooth speaker made by JBL, and a 10-watt inductive charger embedded in the shelf. There’s also a USB-A jack available to simultaneously charge a second device. Multiple Suntables can be linked together for bigger sound, but I wasn’t able to test this.

The Suntable also ships with an external charger, should you wish to use it indoors. The whole unit weighs 19 pounds and comes apart in two pieces for easier transport. ShadeCraft says that the table’s “splash-proof” exterior is fine to leave outside for three seasons, but the top half with all of the electronics should be brought inside during the winter months. It can be placed on a table without the stand but risks easily tipping over, in my experience.

My review unit is a near-final version of the device that is scheduled to ship in August (to the US only). Notably, it includes a button labeled “||” which is not a pause button, but a “feature number two” placeholder for a future light button, ShadeCraft tells me. The “|” button is used to link multiple Suntables together. Otherwise, outside of a few finishing elements and the smaller target area for inductive charging, I’m told it’s very close to what will ship. 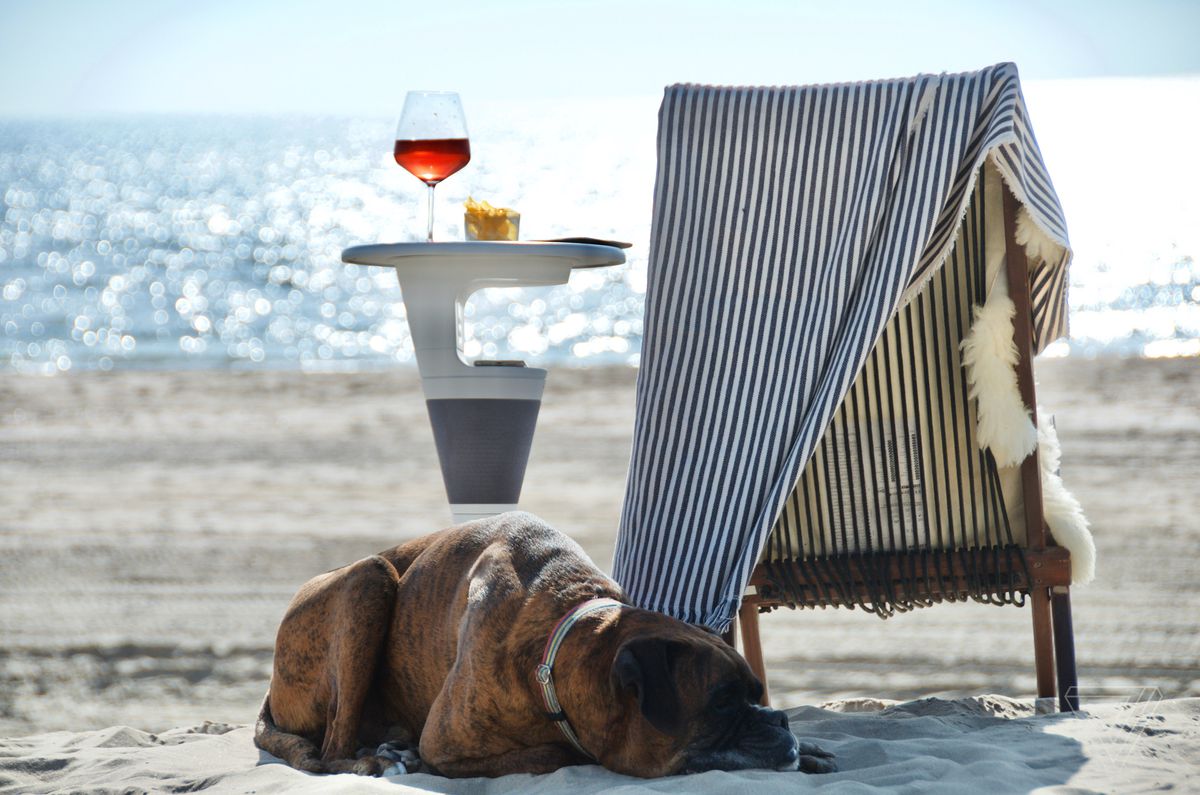 Dog and iPhone enjoying the shade.

I tested the Suntable in two outdoor spaces. The first was on my semi-finished roof terrace. It lacks electricity, but it’s still a great place to enjoy the sun while pondering the end of the world. I also tested it at the beach. The Suntable worked well in both locations, although all that white plastic looked out of place by the sea, as if the offspring of Wall-E and Eve had touched down to soak up some rays.

In the city, I’m not the type of neighbor who would crank up the volume of an outdoor speaker. On a city rooftop, music should be background to the conversations or reading, not the main event, in my opinion. So that’s how I tested it. The JBL speaker had more than enough power for that purpose, while still managing to produce acceptable bass at volumes below 25 percent of max.

At the beach, I could let loose with the audio a bit more. There, it got plenty loud, producing enough volume for spontaneous dance sessions among the crashing surf, yelping kids, and barking dogs.

The sound might only be okay, but that’s probably enough

To really give the speaker a listen with a critical ear, I had to take it indoors where the top half will have to live during the winter months anyway. Here, I could compare it to a Sonos One (Gen 1), a speaker that originally sold for $200 and is about the same size as the JBL speaker bulge at the waist of the Suntable. The sound was comparable when listening to Arcade Fire’s “My Body is a Cage” at low volume, but the JBL sound was thinner compared to the fuller, more detailed sound of the Sonos, especially as the volume increased. It wasn’t even close with DaBaby’s “Rockstar,” with the bass from the Sonos One easily besting the JBL to create a much more pleasant sound. Nevertheless, you’re not buying a Suntable for critical listening at home. The sound might only be okay, but that’s probably enough for the spaces it’s meant to occupy.

Although my Suntable review unit shipped with an external power cable, I’ve never used it. I unboxed the table at 5:30PM, pressed the power button, and… nothing. So I carried it to the roof where it sat until the next morning, exposed to the low northern European sun for the final four hours of the day and another two after sunrise. At 7:30AM, the Suntable sprang to life as it has every day since, receiving its charge from the sun alone.

I tested the Suntable in the way a family would use it. Each day, I’d play music over Bluetooth for a few hours while my iPhone X laid on the shelf to wirelessly charge. Sometimes it was an hour more, sometimes less, with music or without, charging or not. Some days, I’d simultaneously charge a second device like my Kindle or my kid’s hand-me-down phone by plugging a USB cable into the table, and still, the music played on. One day, the Kindle, however, greeted me with a high temperature warning when I returned, unlike the iPhone that had been sitting on the shaded shelf.

I should note that once, my iPhone didn’t charge when placed on the inductive shelf even though iOS said it was charging and Suntable LED pulsed blue. I was also charging a Kindle at this time and streaming Bluetooth audio out the JBL speaker from the iPhone. I could not repeat this failure during days of subsequent testing, however. ShadeCraft attributes any issue I might have had to my review hardware as the inductive pad isn’t as close to the surface (thus, reducing power) as the final shipping units will be.

In additional to lighting, ShadeCraft has a few other “stretch goal” ideas to augment the Suntable. These include additional colors, an auger stand for screwing the table into the dirt or sand, an extender post to raise the table height, and a carrying / storage case.

Suntable comes with all the usual warnings for a Kickstarter campaign, albeit with the assurance that you’re dealing with a real company that has a history of shipping real products. And in the case of Suntable, I can confirm that ShadeCraft delivers on its claims.

True, it’s not for everyone (Dan!), and anything above the Super Early Bird pricing of $299 is hard to justify. But the Suntable fills a niche for anyone furnishing an outdoor space without ready access to power. Moreover, it makes life just a little bit better. And really, what higher praise can you give a gadget?

Photography by Thomas Ricker / The Verge

Vox Media has affiliate partnerships. These do not influence editorial content, though Vox Media may earn commissions for products purchased via affiliate links. For more information, see our ethics policy.