An artist’s concept shows what one of the earliest known disk-shaped galaxies might look like.
NRAO / AUI / NSF / S. Dagnello

When the universe was just 1.5 billion years old, it had already put together a mini-Milky Way. Though small in stature, this galaxy is significant for what it represents: one of the earliest known rotating disk galaxies — and the best indicator yet for galaxies like the Milky Way formed.

In this week’s Nature, Marcel Neeleman (Max Planck Institute for Astronomy, Germany) and colleagues report detailed observations of a galaxy dubbed DLA0817g, and nicknamed the Wolfe Disk for late astronomer Arthur M. Wolfe. They used the Atacama Large Millimeter/submillimeter Array (ALMA) and the Hubble Space Telescope. Sharp ALMA images reveal details as small as 4,200 light-years across in a galaxy whose light has traveled for 12.5 billion years to Earth.

That data, combined with the Hubble images, provide solid evidence that the emission the researchers are tracking coincides with a rotating disk of dust, gas, and stars within the galaxy. (Unlike the Milky Way, there’s no evidence for a spiral shape in this galaxy, but its disk shape is distinct.) 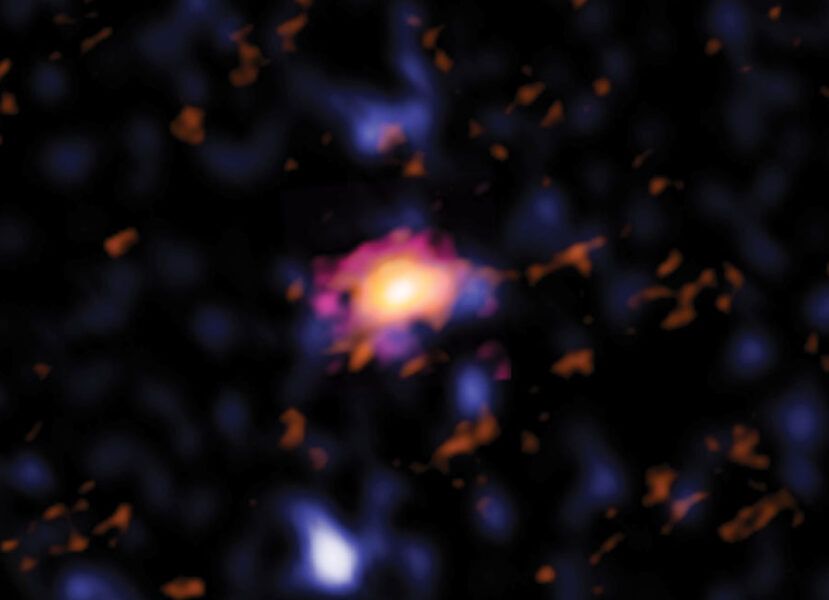 The formation of a stable disk galaxy in the early universe does away with some early ideas of galaxy formation, which suggested that infalling gas growing an infant galaxy would be too hot to settle into a disk until much later on. Likewise, major mergers between galaxies would toss stars and gas around, creating a writhing mess rather than an orderly disk.

Instead, the Wolfe Disk’s existence provides solid support that the universe’s first galaxies grew in ways that let infalling gas remain cool, calm, and collected. For example, streams of gas might flow in along the filaments of the cosmic web, a scenario consistent with recent theoretical work. Computer simulations have show that this so-called cold-mode accretion was important in the universe’s early years. The study doesn’t rule out mergers altogether, though; the mergers could have been smaller ones that didn’t create too much of a mess.

Astronomers imaged the disk by the emission from carbon atoms missing one electron, also known as singly ionized carbon. Even though these atoms are scarce, they emit more strongly and the emission is therefore easier to trace than that from hydrogen gas, which is difficult to detect despite its abundance. The ionized carbon emissions trace a disk galaxy that’s about 14,000 light-years across, compared to our galaxy’s 100,000-light-year extent. The galaxy has the mass of some 72 billion Suns and rotates at about 300 km/s (600,000 mph).

The Wolfe Disk isn’t the first disk galaxy to be discovered in the early universe. In 2015, astronomers looked back 11 billion years to discover what appears to be a massive, rotating galaxy. And in 2017, ALMA observations of galaxies just 800 million years after the Big Bang offered tentative evidence of rotation. But this is the first galaxy where the observations are on a firm-enough footing to rein in theoretical scenarios.

“Neeleman and colleagues’ results constitute some of the first observational evidence for the existence of cold gas disks in massive galaxies very soon after the Big Bang,” writes Alfred Tiley (University of Western Australia) in an accompanying opinion piece.

Now, Tiley adds, the trick will be to find more — hopefully, a lot more — like it, and see if this galaxy is representative of disk galaxies in general.