For the past couple of years, the European Space Agency’s (ESA) Mars Express spacecraft has been keeping an eye on a mysteriously long, thin cloud that periodically shows up over Arsia Mons, the 12 mile (20 km) high volcano on Mars.

In a July 29 statement, ESA said the cloud has appeared again, illustrated by the images above, taken by the Visual Monitoring Camera (VMC) on Mars Express on July 17 and 19, 2020.

Mars Express first noticed and photographed the cloud in September 2018. A recurrent feature, the cloud is made up of water and ice and can stretch for over 1,100 miles (1,800 km). Despite its location and appearance, scientists say it’s not a plume linked to volcanic activity. Instead, the curious stream forms as airflow, influenced by the volcano’s leeward slope (the side that does not face the wind). 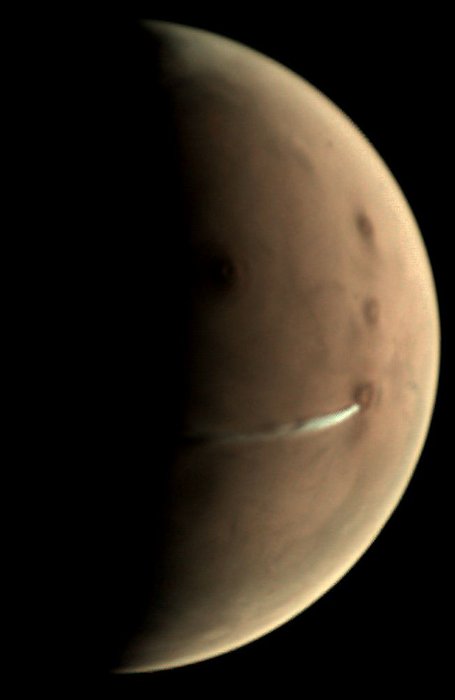 Here’s the cloud, extending west of the Arsia Mons volcano on Mars, seen in a Mars Express image taken October 10, 2018. Click here for an annotated version of this image. Image via ESA.

Jorge Hernandez-Bernal, at the University of the Basque Country (Spain), is leader of a team studying the cloud. He said in a statement:

We have been investigating this intriguing phenomenon and were expecting to see such a cloud form around now. This elongated cloud forms every Martian year during this season around the southern solstice, and repeats for 80 days or even more, following a rapid daily cycle. However, we don’t know yet if the clouds are always quite this impressive.

A Martian day, or sol, is slightly longer than an Earth day at 24 hours, 39 minutes and 35 seconds long. A Martian year consists of 668 sols – approximately 687 days – so the seasons last for twice as long. The southern solstice is the period of the year when the sun is in the southernmost position in the Martian skies, just like December 21-22 solstice here on Earth. In the early mornings during this period, this fleeting cloud grows for about three hours, quickly disappearing again just a few hours later.

Most spacecraft in orbit around Mars tend to observe in the afternoon, however Mars Express is in a privileged position to gather and provide crucial information on this unique effect. Mars Express mission team member Eleni Ravanis works specifically for the VMC instrument. She said:

The extent of this huge cloud can’t be seen if your camera only has a narrow field of view, or if you’re only observing in the afternoon. Luckily for Mars Express, the highly elliptical orbit of the spacecraft, coupled with the wide field of view of the VMC instrument, lets us take pictures covering a wide area of the planet in the early morning. That means we can catch it!

The Mars Express science team has named the cloud the Arsia Mons Elongated Cloud, AMEC. So, how long has it been disappearing and reappearing? Why does it only form in the early morning? Scientists continue to investigate.

Bottom line: Images from the Mars Express spacecraft show that a mysteriously long, thin cloud has again appeared over the Arsia Mons volcano on Mars.