The universe is smoother than expected.

The latest data release from the Kilo-Degree Survey (KIDS) confirms earlier indications that the current distribution of gravitating matter is less clumpy than predicted by the standard model scientists use for cosmology.

Intervening matter (both visible and dark) slightly bends the light from these galaxies via weak gravitational lensing, producing tiny distortions in their shapes (see Sky & Telescope’s September 2016 issue). Precise analysis of this cosmic shear reveals how the matter is distributed.

A zoom-in on a part of the KIDS map, showing a patch of universe
approximately 1.5 x 1 billion light-years across. In this false-color
image, high-density regions are shown in yellow and
low-density regions are in pink.
B.Giblin / K.Kuijken / KIDS team

The European Planck mission mapped the Big Bang’s afterglow, known as the cosmic microwave background, and scientists have modeled the minute fluctuations in the glow’s temperature using the standard cosmology, which includes dark energy and dark matter. This model, sometimes referred to as ΛCDM, predicts that galaxies and galaxy clusters should group together a certain amount in the present-day universe. However, the KIDS map yields a measurement of this clustering, known as S8, that is 8.3% smaller than expected. The results have been submitted for publication in Astronomy & Astrophysics as several separate studies, and are currently available in preprint form.

According to KIDS project lead Koen Kuijken (Leiden Observatory, The Netherlands), the team has taken care to minimize all potential systematic errors, both in the observations and in their analysis. “Compared to our 2016 data release [based on half as much data], the difference with the ΛCDM predictions is a bit smaller, but the error bars are much tighter,” he says.

The statistical significance of the result is 3 sigma, which means there’s only a 1 in a 1,000 chance that the findings could be caused by scientists having looked at a particularly unusual part of the universe, according to team member Benjamin Joachimi (University College London) in a press statement.

The ΛCDM model also predicts a value for the Hubble constant — a measure of the current expansion rate of the universe — that is not borne out by measurements of objects in relatively nearby galaxies (see the June 2019 issue of Sky & Telescope). New results continue to extend that cosmic controversy. The two issues may be related, says Kuijken, but it’s too early to say if they really point to a fundamental problem with the standard cosmological model. “Maybe it’s just a matter of relatively small modifications.” 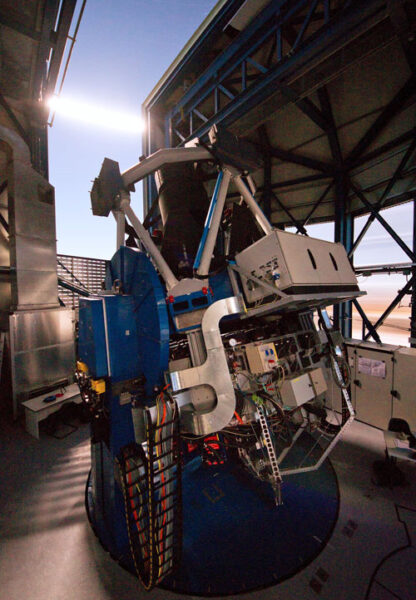 This night view taken from the inside of the VLT Survey Telescope (VST) enclosure shows the telescope observing on a moonlit night. The bright Moon can be seen crossing the opening of the enclosure during this long exposure. OmegaCAM, a single enormous optical CCD imaging camera, is the sole instrument of the VST.
ESO / INAF-VST / OmegaCAM / G. Lombardi (glphoto.it)

But according to theorist Avi Loeb (Harvard University), progress in physics traditionally follows anomalies. “If the anomaly in S8 and the Hubble constant stands the test of time, then both may imply new physics,” he explains. “It would be attractive to kill two birds with one stone. So far, however, I have not seen an elegant theoretical idea that can account for the Hubble tension, let alone the anomaly in S8.”

Analysis of the full 1,350-square-degree dataset of the KIDS survey is now underway; the fifth and final data release is expected next year. Another cosmic-shear project, the Dark Energy Survey has just published results from their first survey year, yielding a clustering parameter 5.5% smaller than the ΛCDM value. A third project with the Japanese Hyper Suprime-Cam Survey is also expected to publish results within the next few months

Starting three or so years from now, the European Space Agency’s Euclid mission and the Vera C. Rubin Observatory will greatly improve on current surveys, both in sensitivity and in sky coverage. Eventually, it will become clear whether or not we’ll have to discard our cherished theoretical model of the universe.

“The history of physics teaches us modesty,” says Loeb. “Sometimes nature is much more imaginative than we are.”