We know that Mars used to be volcanically active in the past. The planet is dotted with enormous now-dormant volcanoes, and the remains of old lava flows can still be seen today. Now, it seems, some of those lava flows weren’t composed of lava at all, but rather mud, according to researchers in Europe. The finding is evidence for what are called sedimentary volcanism, where liquid mud – water-rich sediments – ruptured from Mars’ subsurface, flowing like lava before refreezing. These features have often been seen on Earth, in association with smaller conical hills that resemble mud volcanoes.

The intriguing peer-reviewed results were published in the journal Nature Geoscience on May 20, 2020.

A possible mud volcano on Mars, just one of thousands. Ancient flows from such features and other volcanic spots had previously been assumed to be lava, but a new study suggests that at least in some cases, it was mud instead. That would mean these landforms really are mud volcanoes, not smaller magmatic volcanoes. Image via NASA/ JPL-Caltech/ University of Arizona/ DLR.

Large outflow channels on ancient terrains of Mars have been interpreted as the products of catastrophic flood events. The rapid burial of water-rich sediments after such flooding could have led to sedimentary volcanism, in which mixtures of sediment and water (mud) erupt to the surface.

Tens of thousands of volcano-like landforms populate the northern lowlands … on Mars. However, it is difficult to determine whether the edifices are related to igneous or mud extrusions …

Here we investigate the mechanisms of mud propagation on Mars using experiments performed inside a low-pressure chamber at cold temperatures. We found that low viscosity mud under Martian conditions propagates differently from that on Earth, because of a rapid freezing and the formation of an icy crust. Instead, the experimental mud flows propagate like terrestrial pahoehoe lava flows, with liquid mud spilling from ruptures in the frozen crust, and then refreezing to form a new flow lobe.

We suggest that mud volcanism can explain the formation of some lava-like flow morphologies on Mars, and that similar processes may apply to cryovolcanic extrusions on icy bodies in the solar system. 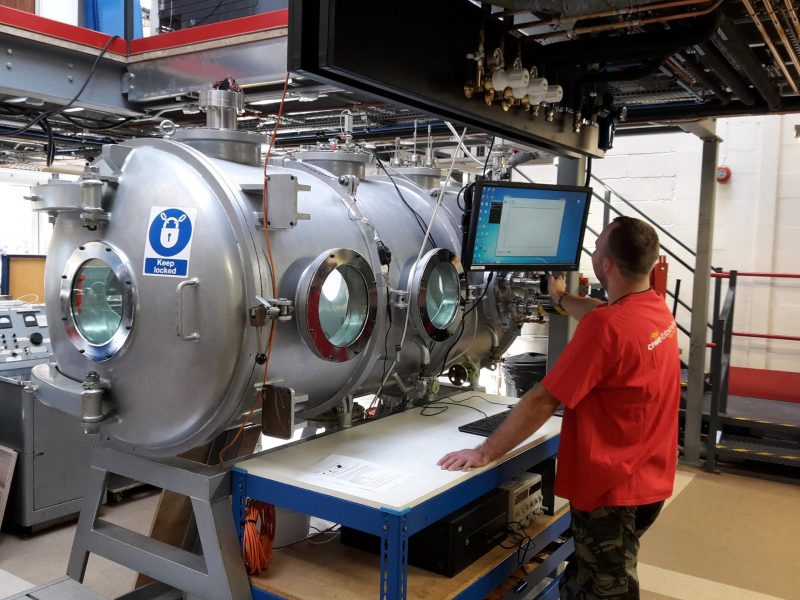 An example of mud frozen in simulated Mars conditions. The mud froze on the outside but remained liquid on the inside, and formed cavities and shapes similar to lava on Earth. Image via Brož et al./ Nature Geoscience/ CNRS.

The new study was led by researchers from the Institute of Geophysics at the Czech Academy of Sciences (CAS). It involved Lancaster University, the Open University and the Rutherford Appleton Laboratory in the U.K., CNRS in France, DLR and Münster University in Germany, and CEED in Norway.

Ernst Hauber of the DLR Institute of Planetary Research in Berlin-Adlershof said in a statement:

We have long been aware that in the early history of Mars, several billion years ago, large amounts of water were released over a short period of time, eroding very large valleys in the landscape, which have long since dried up. Extensively eroded masses of fragmented rock were transported through these outflow channels and into the northern lowlands of the planet, where they were quickly deposited. Later, these rocky masses were covered by younger sediments and volcanic rocks. 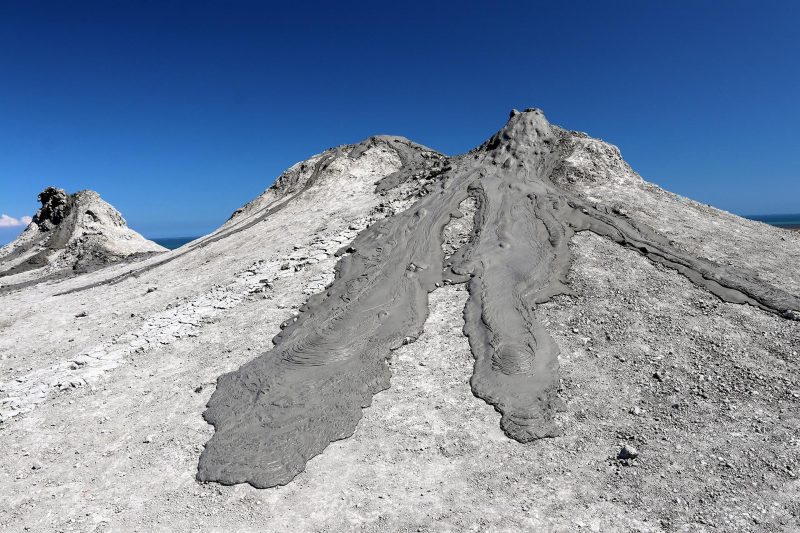 Many of the mud flows are found in locations where massive channels were carved by water a few billion years ago. These floods were huge, comparable to the largest floods known on Earth. Water would then seep back into the subsurface, where it could then re-emerge as mud.

How did the researchers determine that some of the lava flows were not really lava, but mud? Lionel Wilson, Emeritus Professor of Earth and Planetary Sciences at Lancaster University, explained:

We performed experiments in a vacuum chamber to simulate the release of mud on Mars. This is of interest because we see many flow-like features on Mars in spacecraft images, but they have not yet been visited by any of the roving vehicles on the surface and there is some ambiguity about whether they are flows of lava or mud.

What they found was quite interesting. Flowing mud on Mars didn’t behave at all like flowing mud on Earth, due to the very thin atmosphere and cold temperatures. The vacuum chamber re-created current Martian conditions. The flowing mud on Mars would freeze quickly and form an icy crust. In the vacuum chamber, the mud flows formed shapes similar to pahoehoe lava, which is common in Hawaii and Iceland. After the mud spilled out of ruptures in the ground, it refroze and formed smooth, undulating surfaces. The outer surface of the mud would freeze on contact with the air, while the inner core remained liquid. This liquid can break the frozen crust to form a new flow lobe that then refreezes. 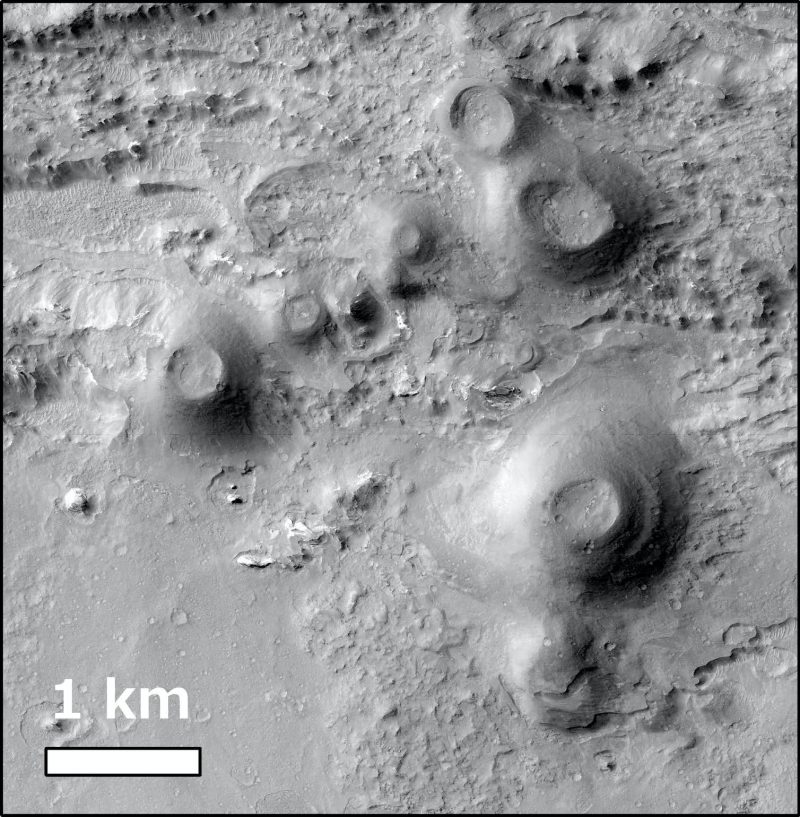 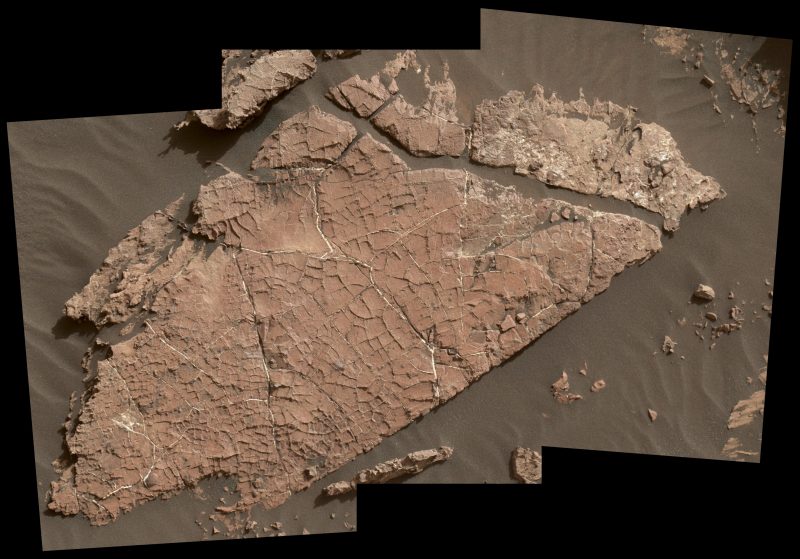 Rock slab called Old Soaker, found by the Curiosity rover in Gale Crater on Mars, which is covered with what are thought to be mud cracks from when a layer of mud dried out about 3 billion years ago. Image via NASA/ JPL-Caltech/ MSSS.

In another test where the atmospheric pressure was the same as Earth’s, the mud did not form those shapes, even though it was just as cold in the vacuum chamber. Petr Brož, lead author of the new study, said:

Under the low atmospheric pressure of Mars, the mud flows behave in much the same way as pahoehoe, or ‘ropy’, lava, which is familiar from large volcanoes on Hawaii and Iceland. Our experiments show that even a process as apparently simple as the flow of mud – something that many of us have experienced for ourselves since we were children – would be very different on Mars.

However, the impact of this familiar effect on mud has never been investigated in an experiment before. Once again, it turns out that different physical conditions must always be taken into account when looking at apparently simple surface features on other planets. We now know that we need to consider both mud and lava when analyzing certain flow phenomena.

There are tens of thousands of small conical hills in the northern highlands of Mars that may be mud volcanoes. It isn’t clear whether any of them may still be pumping out mud today, but the findings overall show that mud and wet sediments were common on the planet, at least in the past. In Gale Crater, the Curiosity rover has also found cracked, dried rock slabs that look exactly like dried out mud from the bottom of the lake that used to exist there.

Petr Brož of the Czech Academy of Sciences, lead author of the new study. Image via CAS.

Mars isn’t the only place where this kind of sedimentary volcanism is thought to occur. There is also evidence for a similar process on the dwarf planet Ceres, which may have once had a muddy ocean beneath its outer icy crust. According to Brož:

We suggest that mud volcanism can explain the formation of some lava-like flow morphologies on Mars, and that similar processes may apply to eruptions of mud on icy bodies in the outer solar system, like on Ceres.

Last year it was reported that Ceres likely had subsurface salty muddy meltwater reservoirs that lasted millions of years. The bright spots on Ceres’ surface are now thought to be salt deposits left over from when cryovolcanoes – ice volcanoes – erupted, with the water quickly sublimating away due to the almost complete lack of an atmosphere. Similar features thought to be cryovolcanoes were also discovered on Pluto by the New Horizons spacecraft, and on Saturn’s moon Titan by Cassini. If the flows and conical hills on Mars are really also related to Martian mud, then that would show such processes are common in our solar system (including Earth of course), and could potentially provide valuable clues as to how life originated and evolved on our own planet.

Bottom line: Some features on Mars that were thought to be lava flows may actually be mud flows, according to a new study.