When the Sun is as spotless as it has been over the past year, it would be easy to think nothing much is happening. That’s hardly the case, as radio astronomers have recently discovered: The quiet Sun is constantly emitting weak bursts of radio waves. These bursts might help explain one of the longest-standing questions about our Sun.

NASA’s Solar Dynamic Observatory captured a powerful flare from the Sun in 2012. Nanoflares have one-billionth the energy of regular flares and can’t yet be detected individually.
NASA / SDO / AIA

The Sun’s visible surface simmers at 5778 K (9,580°F), yet the tenuous plasma of its extended atmosphere, or solar corona, reaches a blistering million degrees. How the energy contained in the magnetic fields writhing at its surface is converted to heat in its outermost atmosphere remains an open question.

Researchers have proposed several possible answers. One controversial idea is that nanoflares, the smaller, more abundant siblings of the bright flares we see when the Sun is active, provide some or even all of the heat. The problem with nanoflares, though, is that we can’t see them — they are too weak and too small to be seen individually.

“Generally, I view nanoflares with a combination of horror and fascination,” says solar physicist Hugh Hudson (University of Glasgow, UK) “The former because they are the subject of so much ill-justified hype, and the latter because the basic idea makes so much sense.”

Now, Surajit Mondal (Tata Institute of Fundamental Research, India) and colleagues have made a discovery that might eventually provide hard evidence that nanoflares exist. 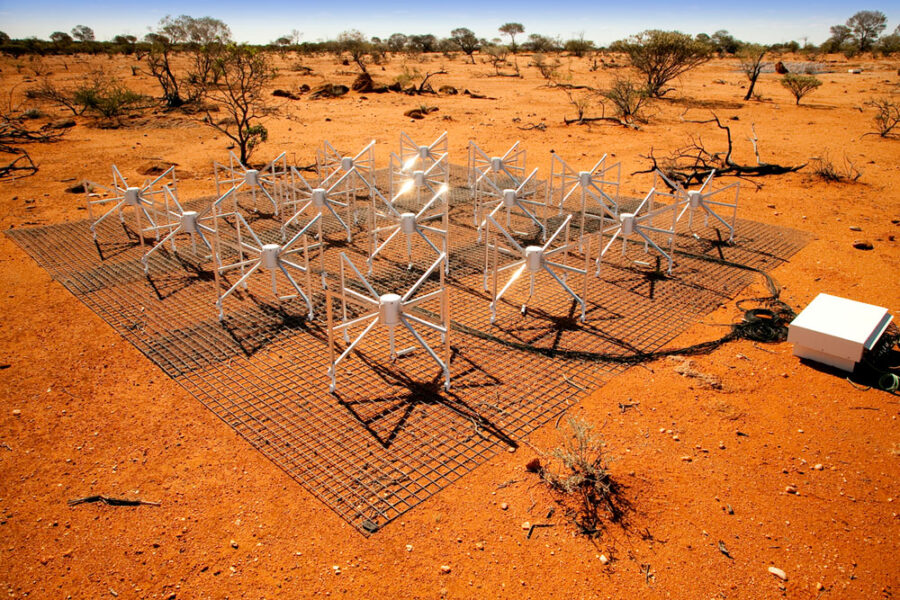 This is one tile of radio antennas, part of the 16-tile Murchison Widefield Array in Australia.
Square Kilometer Array

The scientists analyzed radio images of the Sun taken on a particularly quiet day, November 27, 2017. Using the Australian Murchison Widefield Array, a network of low-frequency radio antennas, the researchers picked up multiple bursts of meter-wavelength radio waves from the Sun. Most bursts lasted less than a second, and they appeared throughout the solar corona — any given region was bursting about a tenth of the time.

Mondal and colleagues do not call these bursts nanoflares; they instead describe the emissions as “the first direct observational evidence for the ubiquitous presence of weak impulsive meterwave radio emissions in the quiet solar corona.” The bursts are 100 times weaker than anything that’s ever been detected before.

“It is a surprise, and also a unique, robust measurement,” says Monica Bobra (Stanford University), who was not involved with the study. Hudson, who likewise was not involved, adds, “They have pushed the detection limits for impulsive events down by a major factor.”

But Hudson urges caution with the results. “Just because there is unexplained variance in a dataset does not mean that it has to be what you have in mind,” he says. “I’ve seen other ‘nanoflare’ discoveries disappear because the authors had not been careful enough about that.”

The next step is one for the theorists, who could calculate whether these radio emissions could correlate to enough nanoflare activity to heat the corona, Bobra explains. Mondal’s team writes that rough estimates show this to be the case, but the real test will come with formal computer simulations.