Every dot in this “pie” diagram is a galaxy, color coded by type: green for nearby galaxies, magenta and red for old red galaxies, blue for young blue galaxies, yellow and white for quasars.
A. Raichoor (EPFL) / A. Ross (Ohio State Univ.) / SDSS Collaboration

The Sloan Digital Sky Survey (SDSS) project has been scanning the sky for the past 20 years, collecting spectra of millions of galaxies. Now, the SDSS has released a culmination of that data collection: a comprehensive look at the universe’s evolution over the past 11 billion years.

In a gaggle of 23 papers released on the arXiv astronomy preprint server, astronomers amass conclusions from the larger SDSS survey, specifically from its Extended Baryon Oscillation Spectroscopic Survey (EBOSS), which catalogued more than 4 million spectra of galaxies and quasars in a search for a signature from the universe’s earliest years.

Waves in the Primordial Sea 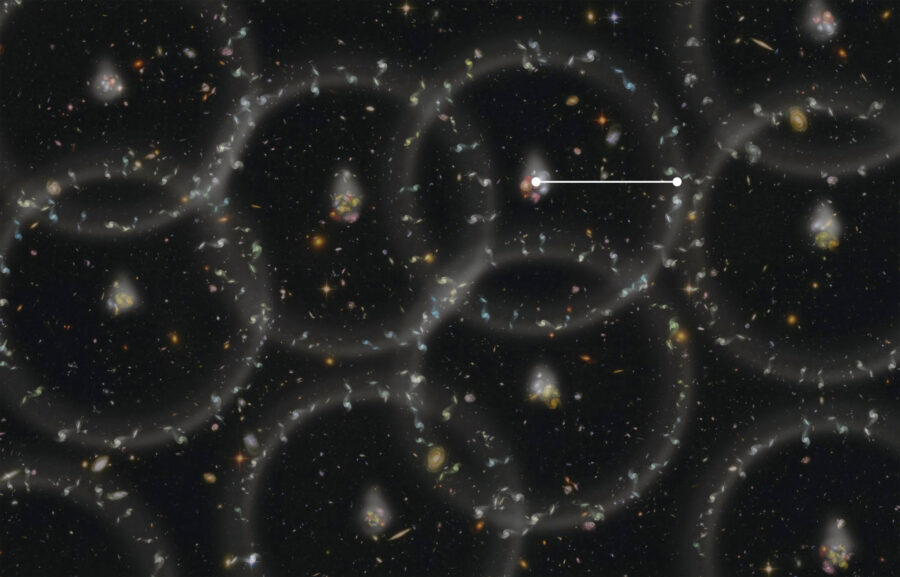 An artist’s conception of the effect of baryon acoustic oscillations, which originated as density waves traveling through the plasma of the early universe. These waves caused a tendency for galaxies to be separated by a certain distance. That tendency is greatly exaggerated in this illustration. The radius of the spheres (white line) is the scale of a “standard ruler” that astronomers can use to determine the large-scale structure of the universe and how it has evolved.
Zosia Rostomian / Lawrence Berkeley NationalLaboratory)

In the early universe, light and matter were entangled in each other, so that as charged particles moved, photons did too. And move they did: as plasma gravitated toward areas of higher density, photons rebelled, pushing the charged particles outward again. The resulting push and pull set the primordial plasma sloshing.

As the cosmos cooled, ions were finally able to hold on to their electron partners in a moment termed recombination, some 380,000 years after the Big Bang. Since this recombined matter was no longer charged, it separated from light. Freed photons flashed out in what we now call the cosmic microwave background (CMB), bearing the tiny energy fluctuations that reflect the variations in density present at that time. Likewise, while the primordial sloshing stopped with recombination, it had left its imprint on the distribution of matter.

Gradually, atoms combined into dust and stars and galaxies, but the imprint remained on the very largest cosmic scales. Galaxies naturally gravitate into groups and clusters. But when SDSS astronomers looked on a grander scale, tabulating the distances between thousands of galaxies, they found a pattern: Galaxies are slightly more likely to be separated by 490,000 light-years from their nearest neighbor.

That was in 2005. This is now: Astronomers on the EBOSS team have upped the ante, looking at millions of galaxies and quasars rather than thousands. Not only do they see the same characteristic separation, a “standard ruler” that can be used to gauge the cosmic expansion rate, they have measured that ruler over cosmic time to see if it has changed.

As astronomers look out into the universe, they’re staring back in time. To map the nearby universe out to 6 billion years’ travel time, they collected spectra of large, red galaxies. Farther out, they observed younger, blue galaxies. Finally, to map 11 billion years into the past, they looked to quasars, where material falling onto a central supermassive black hole lights up and outshines its whole galaxy.

“The EBOSS results are the culmination of a massive effort, and result in a superb map of the universe,” says Wendy Freedman (University of Chicago), who was not involved in the study.

The massive amounts of data collected for the EBOSS project fills in a huge gap between observations of supernovae or variable stars in relatively nearby galaxies and the distant cosmic microwave background, emitted 13.4 billion years ago.

One of the most striking results from the EBOSS survey is a new measurement of the Hubble constant, a number that reveals how fast the universe is expanding now. This number has famously been the subject of debate ever since it was first measured; currently, most measurements of the early universe, such as the density fluctuations of the CMB, show the number to be on the lower side, while measurements in nearer galaxies give a higher number.

The EBOSS team is taking a side in the fight. Estimating a Hubble constant value between 67.4 and 69.0 km/s/Mpc, the team has results on the level of the measurements from the CMB.

“Taken together, detailed analyses of the EBOSS map and the earlier SDSS experiments have now provided the most accurate expansion history measurements over the widest-ever range of cosmic time,” says EBOSS survey scientist Will Percival (University of Waterloo, Canada) in a press release.

While it might seem esoteric, the exact value of the Hubble constant decides the fate of the universe. And the fact that different methods attain different values suggests that there might be some unknown physics happening — something that would cheer physicists who have spent decades trying to directly detect dark matter and understand the true nature of dark energy.

“If people thought that after more data collecting the discrepancy would just disappear, that hasn’t happened,” says Adam Riess (Johns Hopkins University), who also was not involved in the study. “In fact, its significance has generally been growing.”

Riess and Freedman, who have both run studies based on stars in nearby galaxies, agree that the fact that the discrepancy persists strengthens the tensions between methods that use faraway light to sample the early universe and methods using nearby objects to sample later on in the cosmic timeline. “I think there is something interesting at play,” Riess muses.

“The baryon acoustic oscillation measurements are further important because they provide information on how the universe has evolved with time, and constraints on how, for example, the dark energy has evolved with time,” Freedman explains. Indeed, EBOSS measurements show that dark energy hasn’t changed a whit — which actually eliminates one possible explanation for the Hubble constant discrepancy.

Freedman also notes that the disagreement over the Hubble constant depends to some extent on what methods are used. She herself has done studies using Cepheid variable stars and red giant stars, which give two different results.

“I think we still don’t know how this issue will be resolved,” she adds. “It is an interesting time in cosmology.”