In the 33 years since a supernova blew up in one of our nearest neighboring galaxies, astronomers haven’t been able to solve the mystery of what happened to the star. Now, we may finally have an answer.

The Supernova 1987A was one of the most-observed supernovae in history, exploding in the Large Magellanic Cloud just 168,000 light-years away. Telescopes around the globe and in space captured the blast wave, which illuminated three overlapping rings of material that had likely blown off in the star’s final days.

Neutrinos received at Earth right after the supernova indicated that the collapsed object ought to be a neutron star. But astronomers were unable to find any sign of a neutron star. Dust obscures the center of the blast. Some even wondered if a black hole had resulted instead.

Closer study showed that the gaseous remains of the star’s outer layers were slightly off-kilter, hinting that whatever compact object had formed in the blast — whether neutron star or black hole — it had received a kick away from the center of the explosion.

Then, new observations from the Atacama Large Millimeter/submillimeter Array (ALMA) in Chile hinted that the search might be at an end. Phil Cigan (Cardiff University, UK) and colleagues used the array of radio antennas to zero in on a blob of “warm” dust. At 33 kelvin above absolute zero, the blob will hardly heat your feet at night, but it’s warm enough to be an anomaly. That study appeared in 2019 in the Astrophysical Journal (preprint available here). 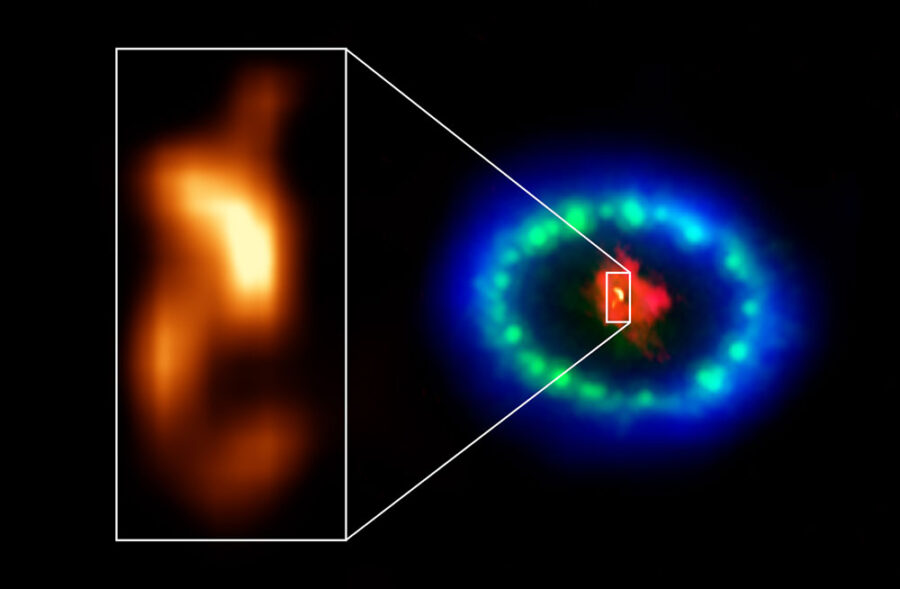 ALMA images of Supernova 1987A revealed a warm blob in the dusty core (inset), which might be heated by an enshrouded neutron star. At right, the red color shows radio emission from dust and gas detected by ALMA, green represents visible light detected by the Hubble Space Telescope, and blue shows the hot, X-ray-emitting gas detected by the Chandra X-ray Observatory. The green and blue emissions mark where the expanding shock wave from the exploded star is colliding with a ring of material around the supernova. In 1987, the light from the supernova set the ring aglow, and the ring has continued to brighten as the ejected gas slams into it.
ALMA (ESO / NAOJ / NRAO) / P. Cigan and R. Indebetouw / NRAO / AUI / NSF / B. Saxton / NASA / ESA

In a separate more recent study, which will also appear in the Astrophysical Journal (preprint available here), Dany Page (National Autonomous University of Mexico) and colleagues show that — out of a smorgasbord of possible alternatives — the only viable explanation seems to be that the dust is warmed by the light of a newborn neutron star. What’s more, they showed that the dust blob overlaps the predicted location of the kicked-out core.

Interestingly, the neutron star’s emission suggests it’s not a spinning, jet-beaming pulsar. Just a regular ol’ core crushed so hard that almost all of it is neutrons.

If everything pans out, then NS 1987A will be the youngest neutron star ever observed.

Is there life below the Martian surface? | Space
Can other gases help explain Mars methane mystery? | Space