National Aeronautics and Space Administration (NASA) has selected five new ideas that will be implemented by the Aeronautics team this year. As of now no one knows whether the idea would work for sure, but the US space agency will give it try to see if any one of them can be used for the making life of humans easier and Earth a better place.

That’s the general idea behind the recent selection of five aviation-related technologies for vigorous study as part of NASA’s ongoing Convergent Aeronautics Solutions project during the next two years of so, which itself is now in its second year.

Researchers will study a new kind of fuel cell, increasing electric motor output with the help of 3D printing, use of Lithium-Air batteries to store energy, new mechanisms for changing the shape of a wing in flight and basing a new antenna design on the use of lightweight aerogel.

“These five innovative concepts, in addition to the six we selected in 2015, have the potential to help us solve some of the biggest challenges we face in aviation,” said Doug Rohn, NASA’s manager for the Transformative Aeronautics Concepts Program.

Those challenges include shrinking fuel use, reducing aviation’s impact on the environment and quieting noise around airports, all at a time when the skies are being filled with an increasing amount of traffic all across the globe.

And just as was the case last year, it’s very possible that after these studies are completed, researchers may find that for whatever reason – technology, cost, the laws of physics – the answer is no, it’s not feasible. At least not right now.

“Is failure an option? It depends on your definition of failure. We’re going to ask the questions and see if these ideas are feasible or not. A successful feasibility assessment may determine the concept won’t work,” Rohn said.

The five study teams selected this year represent researchers from a variety of technical disciplines who work across NASA’s aeronautics centers in Virginia, California and Ohio.

Each study was required to be multidisciplinary, involve multiple centers, directly relate to addressing one or more of NASA aeronautics strategic research goals, and do all of this in a way that is transformative in pushing the state-of-the-art in aviation.

The technologies to be studied were selected following a two-day series of presentations from a number of teams who presented in a competitive environment very reminiscent of what entrepreneur’s experience when pitching investors.

The five ideas selected this year for feasibility studies include: 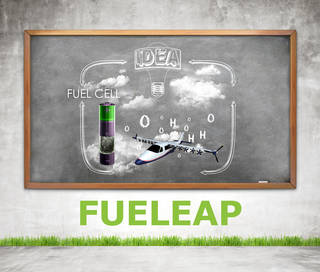 NASA researchers are looking into using a new type of fuel cell that takes hydrogen from standard aviation gas, and oxygen from the air, and combines the two elements to generate electricity to power an all-electric or hybrid electric airplane.

The idea here is to see if a new kind of fuel cell can be used to generate power for an electrically-propelled General Aviation-sized aircraft.

Fuel cells combine hydrogen and oxygen to generate electricity and have been a staple of NASA’s human spaceflight programs going back to Project Gemini during the mid-1960s. Typically, the hydrogen and oxygen is stored onboard the vehicle as super cold liquids, requiring complex and expensive tankage and plumbing that would not be practical for a small, single-engine airplane.

Researchers will study a fuel cell system that would be able to pull hydrogen from standard hydrocarbon-based aviation gas, pull oxygen from the air, and then combine the hydrogen and oxygen to generate electricity. Exhaust products from the process also would be used to increase energy output through a turbine.

The fuel cell would generate this energy more efficiently than if the fuel were burned in a standard piston engine, thus saving fuel and reducing emissions. Such a system also could be supported by airports right now as it wouldn’t require any expensive new facilities or equipment to be installed. 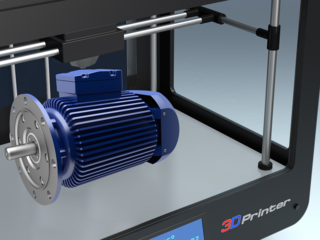 It won’t work quite like this, but NASA researchers are exploring the use of 3-D printing to manufacture lighter and stronger parts that can be assembled to create a more powerful electric motor.

As NASA considers all options for achieving its research goals related to green aviation during the next decade and beyond, all-electric and hybrid electric aircraft offer promising solutions.

But in addition to the challenges associated with electrical power generation and battery storage, researchers hope to improve the power density – a measure of the size and mass of a motor in relation the power it puts out – of the electrical motors that turn the propellers or fans which generate thrust.

The question addressed here is can the increasingly capable process of 3D printing be used in producing electric motor parts that are significantly lighter, perhaps smaller, and made with materials that when assembled together will result in motors with higher power densities.

One obstacle for widely adopting electric-powered aircraft is the extraordinary demand for storing enough energy in batteries, even for small planes traveling short distances. A potential answer is the use of Lithium-Air (Li-Air) batteries, which have the highest theoretical energy storage capacity of any battery technology.

Unfortunately, standard electrolytes – the internal material that enables the battery to work – when used with Li-Air batteries quickly decompose during operation, making the battery useless after only a few charge/discharge cycles.

This team of researchers will investigate the feasibility of designing, novel, ultra-stable electrolytes that are resistant to decomposition so the batteries will last longer, allowing aircraft to extend the distance they can fly. 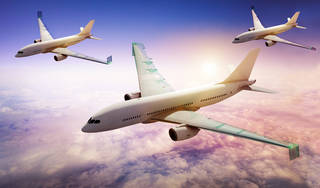 NASA researchers are examining mechanical methods for moving a segment of an airplane’s outer wing in flight in order to allow designers to use smaller tails, which would reduce fuel use and emissions.

One concept for making airliners more fuel, emissions and noise efficient is to reduce the size of the vertical tail.

The tail size is based on the need to be able to keep an airplane centered on the runway in the event of engine failures during takeoff or landing. Once an airplane is at cruising altitude, the larger tail just adds fuel-wasting mass and drag.

A potential solution is to design the airplane’s wing so good-sized outer portion at either end can fold up or down as needed to act as a rudder at the beginning and ending of a flight, enabling the main vertical tail to be smaller.

The challenge is how best to accomplish the mechanical task of moving the hardware. Questions to be answered include how best to achieve a compact and lightweight design, and would that design include conventional actuators or something more novel? 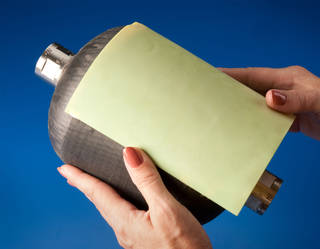 Researchers will investigate using a strong but lightweight version of aerogel, similar to what is seen here, as a foundation for a powerful form-fitting antenna that could be attached nearly flush to the curving surface of an Unmanned Aerial System vehicle.
Credits: NASA

Lightweight, Conformal Antennas for Beyond Line of Sight Communications

One challenge limiting the growth of commercial Unmanned Aerial System vehicles, or drones, flying in the National Airspace System is the current requirement that all such aircraft be operated within the radio line of sight of its ground-based pilot operator.

Relaying command and control communications through a satellite-based tracking system is a potential answer, but the associated antenna systems can be heavy and protrude from an aircraft’s surface – increasing drag, fuel use and emissions.

Researchers hope to enable satellite-based communications by deploying a flexible antenna whose foundation is made of lightweight and very thin aerogel that can snugly conform to the contours of an aircraft – reducing drag, fuel use and emissions.

A key feature of the proposed antenna will be its ability to transmit signals in specific directions, assuring strong links with satellites while minimizing interference with the ground when the aircraft is flying lower.

Is it possible for humans to grow limbs like lizards?
UFO spotted in New Zealand and Mexico, Watch Video