The launch of Perseverance.
NASA/Joel Kowsky

Now there are three.

“The public wants to see the United States of America and our international partners do stunning things,” says NASA administrator Jim Bridenstine during an interview leading up to the launch. “We have a history of doing amazing things in the most challenging of times.”

Perseverance and the Centaur upper stage booster were both injected directly into a heliocentric orbit for a 7-month journey to the Red Planet. NASA’s worldwide Deep Space Network tracked the action, reporting that Perseverance had phoned home and was in good health.

2020 is a “Mars year,” with three missions making the journey to the Red Planet ahead of this October’s opposition, when Mars is closest to Earth. The other two missions were the United Arab Emirates’ Hope Orbiter and China’s Tianwen 1 orbiter-lander-rover combo. Both of those missions launched earlier this month. A favorable launch window comes around roughly every 26 months, offering a trajectory toward Mars with the least amount of time and minimal fuel expenditure. 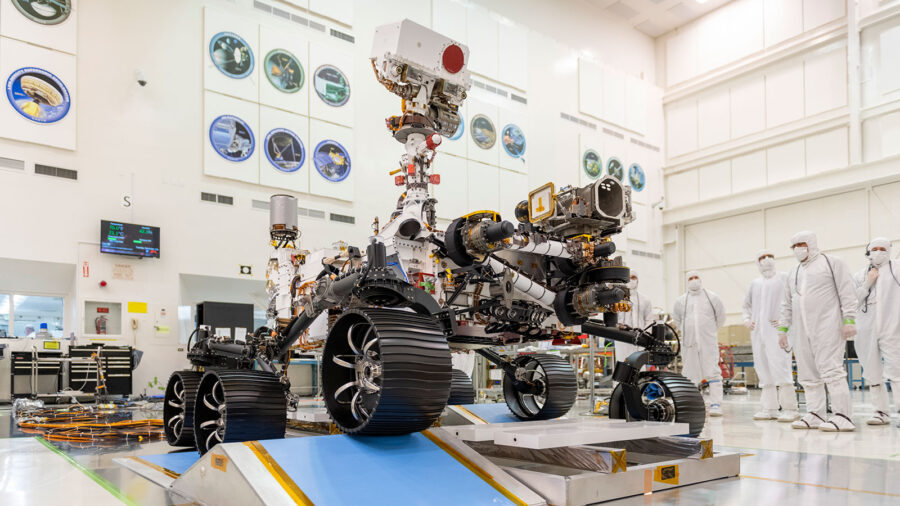 The Mars Perseverance rover in the clean room
NASA / JPL-Caltech

Now, the Perseverance mission enters a cruise phase until February 18, 2021, when its trajectory brings the spacecraft in for a ballistic entry into the tenuous Martian atmosphere over its landing site at Jezero Crater. The rover will then separate from its back shell, discard its heat-shield, and deploy parachutes for its very own “seven minutes of terror,” as it slows down for a landing on Mars.

Like Curiosity, Perseverance’s predecessor that landed in 2012, Perseverance will touch down using a “sky hook” of nylon cords — now a proven method to land large payloads on Mars. Perseverance features an upgraded guidance control system for landing known as Terrain Relative Navigation (TRN), which will allow for autonomous hazard avoidance and a pinpoint landing. Weighing in at 2,315 lbs (1,050 kg) on Earth, Perseverance will be the heaviest payload to date that has landed on the surface of Mars. 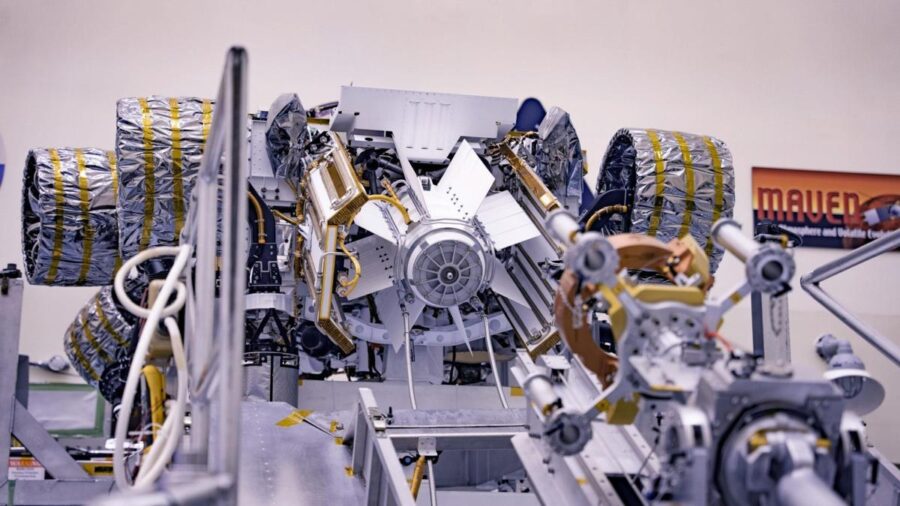 The rover is powered by a nuclear Multi-Mission Radioisotope Thermometric Generator, which was installed shortly before launch. Perseverance was the first launch featuring a plutonium payload since Curiosity. The rover features re-enforced aluminum wheels, as NASA found that the rugged Martian terrain was hard on Curiosity’s wheels. 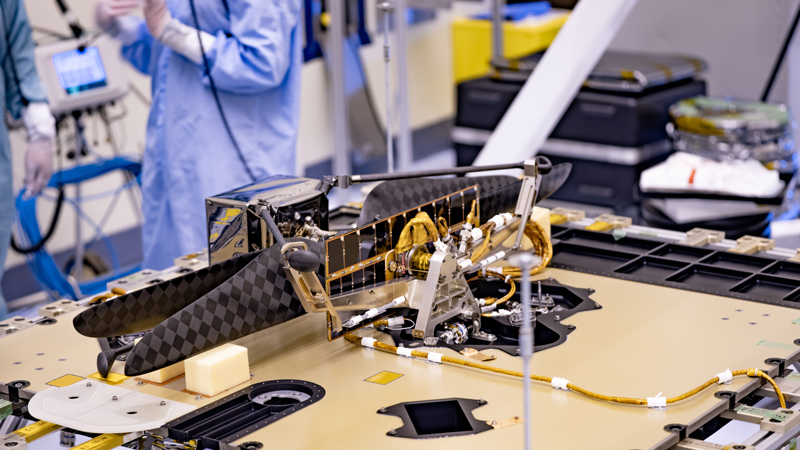 Unlike Curiosity, Perseverance will specifically address the question of whether Mars used to be habitable. To this end, the rover will collect and cache samples for return to Earth by a later mission sometime in the mid-2020s. Such a complex mission will require a lander, transfer rover, and an ascent vehicle.

Perseverance also brought a piece of Mars with it: a piece of a Martian meteorite, long ago blasted off its surface and collected on Earth in 1999. The SHERLOC Raman spectrometer will use this fragment for calibration and study throughout the mission.

SHERLOC will also be examining five samples of spacesuit material, so that scientists can analyze how the materials degrade over time on the surface of Mars. 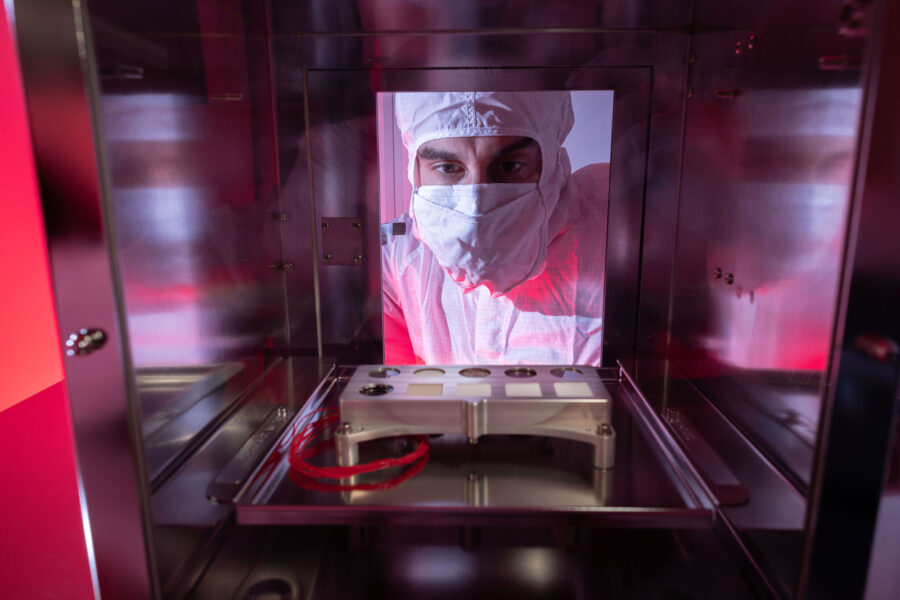 An engineer looks at the SHERLOC calibration target, housed inside a special environmental chamber for its transport to the spacecraft before integration. The target contains 10 types of materials, including spacesuit materials and a fragment of a Martian meteorite.

Perseverance will also — with any luck — field the first microphone to successfully record the sounds of Mars. This has been a long time coming, as the microphone aboard NASA’s Phoenix mission failed to activate after its landing in 2008.

Certainly, 2020 was a challenging year to launch a Mars mission during the ongoing global Covid-19 pandemic. Perseverance carries a plaque commemorating this trying time, acknowledging the efforts of the medical community in battling the virus. 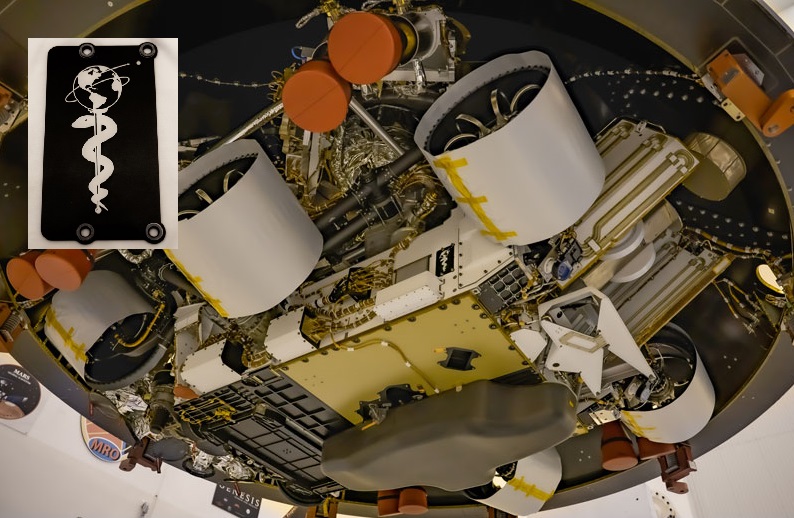 Perseverance in its protective backshell with the commemorative plate visible. The inset shows a close-up of the plate.
NASA / JPL-Caltech / KSC

Perseverance follows what is now a long line of Mars rovers for NASA, including Sojourner (1997), Opportunity (2003), Spirit (2003), and Curiosity (2012). Ironically, NASA has never fielded a robotic rover on the Moon, though China and the Soviet Union have. The U.S. will finally join the “Lunar Rover Club” with the Viper polar lander, set to head to the Moon in late 2023.

Perseverance is the last of the three missions headed to Mars in 2020; the next action will occur in February 2021, when all three missions arrive at the Red Planet. In late 2022, the European Space Agency’s Rosalind Franklin rover will join the robotic armada.

All three missions are now on their way, opening up an exciting new decade of Mars exploration.