EarthSky’s yearly crowd-funding campaign is in progress. In 2020, we are donating 8.5% to No Kids Hungry. Please donate to help us keep going, and help feed a kid!

Today is the 8-year anniversary of the Curiosity rover’s successful landing on the planet Mars. The landing was unprecedented for its use of new technologies designed to get the rover to Mars’ surface safely. To the great relief of space engineers, those technologies worked, and the rover successfully set down in Gale Crater on Mars at 10:31 p.m. Pacific Daylight Time on August 5, 2012 (05:31 UTC on August 6). Curiosity hit the top of Mars’ thin atmosphere at a velocity of about 5,900 meters per second (about 13,000 miles per hour). In seven minutes, it had to decelerate and then set down, hopefully gently, on the surface of the red planet. The rover’s entry, descent and landing phase lasted approximately seven minutes, which space engineers at the time described as:

Going to the red planet is relatively easy. But landing on Mars is hard. In 2003, veteran NASA official Firouz Naderi commented:

Mars is a favorite target.

Around that time – around the turn of this century – the world was averaging about two failures for every three spacecraft launched toward Mars, according to NASA. There were a total of 39 Mars missions launched, and 25 failures or partial failures by the year 2000, according to Wikipedia.

But then we got better at it. As the video above shows, Curiosity’s landing used a combination of complicated new technologies, including a new guided entry system and a rocket-powered sky crane that used cables to lower the 1-ton robot rover to the Martian surface.

Since 2012, Curiosity has been crawling across Mars’ surface serving as a robot extension of our human senses in exploring Gale Crater on Mars. The rover has learned, among many other things, that Gale Crater might once have held a great salty lake.

Artist’s concept of Curiosity rover’s landing on Mars, via a “sky crane” and cables. The new rover headed for Mars now – Perseverance – will also land on Mars via sky crane. Image via NASA. 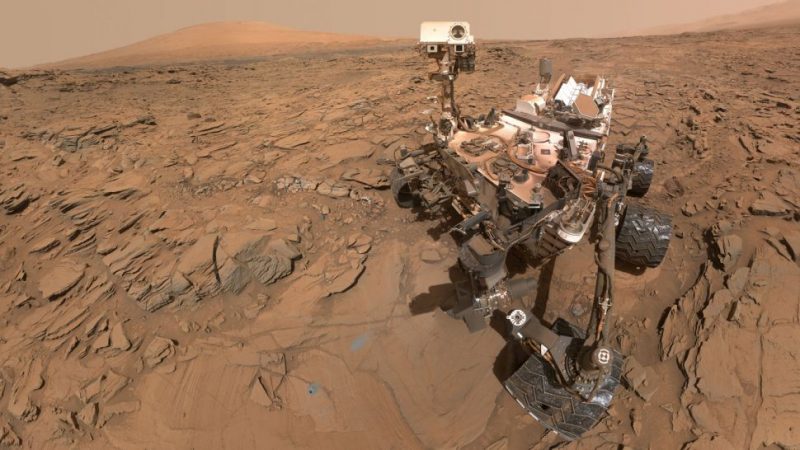 NASA’s Mars rover Curiosity took this self-portrait on May 11, 2016, at the “Okoruso” drilling site in the foothills of Mount Sharp, the central peak of Gale Crater. If Gale Crater once held a lake, Mount Sharp might have been an island in the middle of that lake. This self-portrait combines multiple images taken with the rover’s Mars Hand Lens Imager (MAHLI), during the 1,338th Martian day, or sol, of the rover’s work on Mars. Image via NASA.

Curiosity is now being followed to Mars by another robot rover, Perseverance, which launched from Earth only days ago, on July 30, 2020, at 11:50 UTC. (EarthSky’s yearly crowd-funding campaign is in progress. In 2020, we are donating 8.5% to No Kids Hungry. Please donate to help us keep going, and help feed a kid! ” rel=”noopener” target=”_blank”>Translate UTC to your time.) Perseverance is due to touch down in Jezero crater on Mars on February 18, 2021. Perseverance is largely the same design as Curiosity. When the $2.4 billion spacecraft carrying it reaches in Mars, it will also hit the atmosphere at high speed (more than 12,000 miles per hour or 19,000 kph) and then come to a complete stop on Mars’ surface seven minutes later. Like Curiosity, it’ll land via “sky crane,” but with one big difference: the sky crane technology is now now tried-and-true.

Still, as with Curiosity, space engineers will doubtless experience a nail-biting seven minutes, waiting to hear that the Perseverance rover has set down successfully, as gently as it can, on Mars’ surface.

There, it’ll join the other Mars rovers in the search for life on Mars, and an exploration of the planet’s surface, atmosphere and history.

Read more from the NY Times: Too much Mars? An interesting discussion between two veteran space journalists about why Mars seems to absorb so much of the oxygen – and budgetary resources – in the rooms where explorations of our solar system are decided.

Parachute test for Mars Perseverance rover, now en route to Mars. The images were taken on September 7, 2018, during the third and final flight of the Advanced Supersonic Parachute Inflation Research Experiment (ASPIRE) project. Read more about this image via NASA/ JPL-Caltech.

Why is landing on Mars so hard? This 2017 video from MinutePhysics does a great job explaining it:

Bottom line: Watch a NASA video describing the final 7 minutes of the Curiosity rover’s chilling descent to the surface of Mars on August 5-6, 2012. And learn a bit about how the rover in route to Mars now – Perseverance – will land.

Enjoying EarthSky? Sign up for our free daily newsletter today!