How small can a black hole be?

Astronomers aren’t sure. But the gravitational waves from a peculiar collision some 780 million light-years away may hold the beginning of an answer.

When massive stars die, they generally become either neutron stars or black holes. Depending on how the material inside neutron stars behaves and how fast they spin, neutron stars should top out at between 2 and 3 solar masses before they can’t handle their own pressure and collapse to be black holes.

But so far, most neutron stars we know of weigh in at about 2 Suns or less, and the vast majority of stellar-mass black holes contain 5 solar masses or more. We’ve seen only a smattering of objects in between, many of which astronomers still debate the measurements for. Scientists call this sparsely populated desert the “mass gap.” (There’s another gap above 45 solar masses, but we shan’t dwell on that one here.)

The mass gap is one reason everyone’s talking about the latest announcement from the LIGO-Virgo team. The event, called GW190814, was the merger of a 23-solar-mass black hole with a . . . something . . . of 2.6 solar masses.

In terms of their mass ratio, this pair is the most extremely matched of any duo yet spotted with gravitational waves, beating out the recently announced GW190412. The black hole is so large that, if the smaller object was a neutron star, the black hole would have swallowed it whole, without raising telltale tidal effects that would have shown up in the gravitational wave signal. LIGO astrophysicist Vicky Kalogera (Northwestern University), who coordinated the analysis, likens the merger to Pac-Man eating a dot in one bite.

Although the observations are inconclusive, some researchers lean toward a black hole solution for the 2.6-solar-mass object. In an international webinar on June 25th, team member Philippe Landry (California State University, Fullerton) said that data from the neutron star crash witnessed in 2017 suggest these objects are “reasonably soft” inside, but they’d need to be very stiff in order to survive at 2.6 solar masses without collapsing. While there are ways to make both scenarios possible, he personally doesn’t think a neutron star is a likely explanation here.

This visualization shows the gravitational-wave signal and trajectories of the horizons of the objects involved in GW190814. The smaller one is depicted as a black hole, but making it a neutron star wouldn’t change the signal. The video begins about 10 seconds before merger. Partway through the video, examples of different overtones in the gravitational waves appear. The disparate masses make the overtones detectable. N. Fischer, S. Ossokine, H. Pfeiffer, A. Buonanno (Max Planck Institute for Gravitational Physics), Simulating eXtreme Spacetimes (SXS) Collaboration

One of the things mostly lost in the media fanfare over GW190814 is what the signal revealed about the objects’ spins. Scientists estimate merging black holes’ spins based on their analysis of the gravitational waves’ shape, and they visualize them in half-moon plots that look like this:

This diagram shows the range of possible spins that each black hole in the GW150914 merger event might have had in relation to their orbit around each other.
B. P. Abbott et al. (LIGO Scientific Collaboration and Virgo Collaboration) / Phys. Rev. X 2019, CC BY 4.0 International

The coordinates around the circumference indicate how tilted a black hole’s spin axis is with respect to the dance floor it circles with its partner. Zero degrees means the black hole was pointing straight up, 90° that it was rolling on its side, and 180° that it was upside-down compared with the black holes’ mutual orbit. The color shows which values are compatible with the data. As you can see, there are a lot of options.

But the spin plots for the two objects involved in GW190814 look like this: 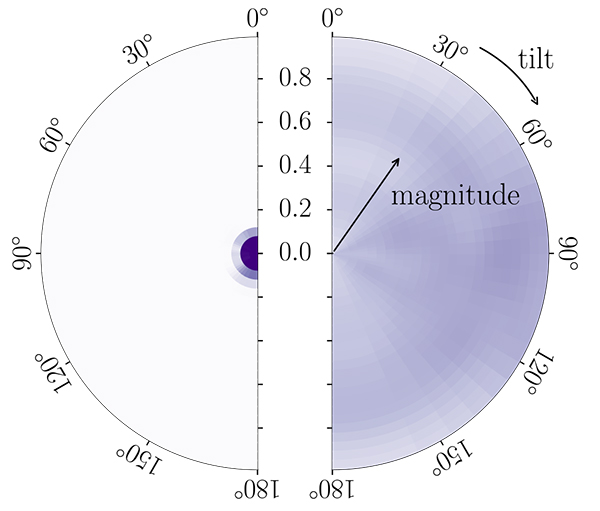 Plot of the tilt-angle and spin magnitude for the 23-solar-mass black hole (left) and 2.6-solar-mass secondary object (right). The tilt angles are 0° for spins aligned, and 180° for spins anti-aligned, with the orbital angular momentum.
R. Abbott et al. / Astrophysical Journal Letters 2020, CC BY 3.0

See how tiny the purple region on the left is? When scrolling through the paper, I did a double take at this plot: We’ve seen nothing like it out of LIGO or Virgo before. The concentrated dot tells us that the larger black hole basically wasn’t spinning.

Calculations and previous gravitational-wave detections indicate that most merger-made black holes wind up with a spin about 70% of their maximum allowed rate. “Low spin means that that 23-solar-mass black hole came from a single star,” Kalogera says. “That’s a firm conclusion.”

The low spin has important implications for stellar evolution. As a star ages and swells, its rotation slows. Astronomers had predicted that both the star’s outer layers and its core will slow together, linked by magnetic fields. If the core spins slowly, then the black hole it becomes when the star dies should spin slowly, too. The large black hole in GW190814 supports that picture.

But X-ray measurements from a few black holes paired up with massive stars suggest those black holes are spinning fast. Not enough gas has poured onto them from the stars to have spun them up, either. Now the question becomes, are those measurements correct?

Scientists can’t tell how fast the 2.6-solar-mass object spun prior to the collision; the right-hand spin plot is a uniform lavender cloud. That’s because the larger object dominates the signal, like a booming voice drowning out a whisper. It also largely dictated the spin of the black hole made by the merger, which is just above zero. 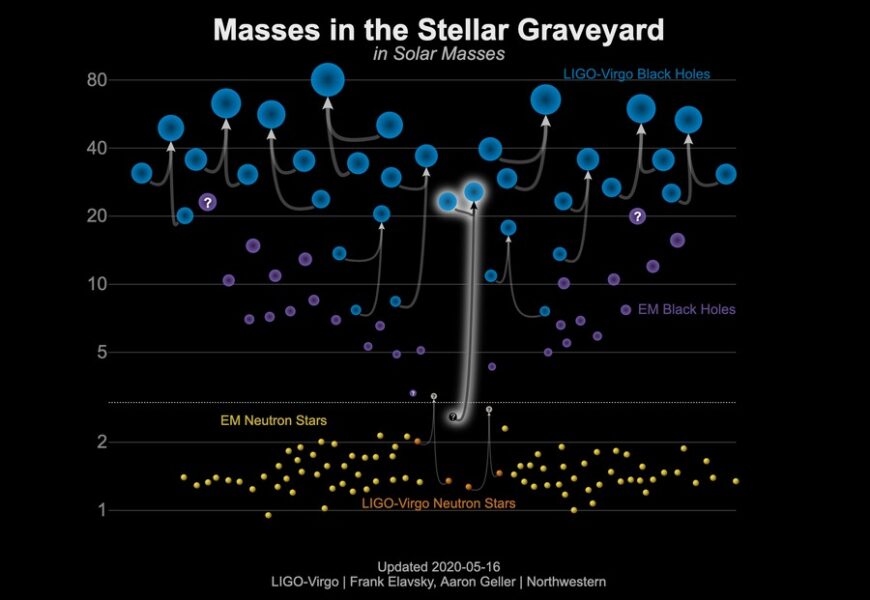 Where Did the Merger Happen?

The other big reason astrophysicists are so intrigued by GW190814 is that it’s hard to explain how such a mismatched pair came together.

Binary stars aren’t likely to have had disparate enough masses to make stellar corpses this different. Nor are globular clusters likely environments, because objects in these ancient star clusters tend to segregate by mass. It’d be immensely unlikely for a 2.6-solar-mass object to team up with a 23-solar-mass one.

Better odds favor young star clusters, where the dense environment can affect binary stars’ evolution and create unusual systems like that of GW190814. Another possibility is that the two objects met in the gas disk around a supermassive black hole, but work on that scenario is still fairly new and it’s hard to say how likely it would be in this case, Kalogera says. Extensive follow-up observations also saw no signs of a flash from gas being shoved aside by a merger-made black hole’s recoil in a disk, unlike with the event S190521g. (I’ll post something on that soon.)

Based on this single detection, how far the detectors can “see,” and how long they’ve been observing, the team calculated how often unequal mergers like this one happen: up to a couple dozen each year per cubic gigaparsec, or about one every two years in a volume a billion light-years on a side. That’s a lot more often than astrophysicists are comfortable with, given how hard it is to make a pair like this.

Of the more than 50 candidate events detected during LIGO’s third observing run, a handful of others may also lie in the mass gap. The team is actively working through the run’s candidates, and we’ll likely see several announcements throughout the rest of 2020.