Well, Google’s report for the Android OS distribution as of September 2018 is here and unfortunately, Android Pie 9.0 is nowhere to be seen even after it has been weeks after it was officially rolled out. Google has been battling OS fragmentation for a very long time now and has successfully upgraded many smartphones to the latest versions, however, the stats show a clear picture of who’s using what Android OS version today. The data is based on users who had accessed Google Play Store in the last 7 days as mentioned on the official report. 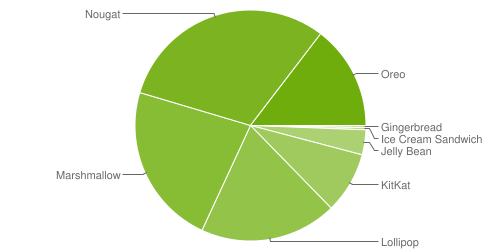 As per the stats, Oreo v8.0 and v8.1 own 1/5th of the total smartphones today with over 19.2% of the total market share. The first position is reserved by Android Nougat v7.0 (19%) and v7.1 (10.3%) which is a 1% drop from the previous count thanks to Google’s attempt to migrate users to the latest Android versions. Android Pie 9.0 is still in its infancy when it comes to market share because it is still available on only Google Pixel devices, Essential Phones, and some partnered devices such as OnePlus 6, Nokia 7.1 Plus among others. It will take some time until Google releases a public version that will be available for all eligible Android smartphones once it gets over with the smartphones under Android One and other projects.

Apple is in trouble: iOS 12.0.1 is more embracing than ever
Both iPhone XS and XS Max are facing serious problem with ‘charging’