M3 is the first of many bright globular clusters to appear in the early evening sky during “globular season.”
Photo courtesy Ron Brecher

One of my favorite seasons is globular-cluster season — and the object that best heralds its arrival is the third object listed in Charles Messier’s 18th-century catalog of non-comets, M3. Although the cluster is situated in the relatively obscure constellation Canes Venatici, its proximity to the zero-magnitude golden gem Arcturus gives M3 the appearance of belonging to neighboring Boötes. Indeed, the globular is much closer to Arcturus than to Canes Venatici’s leading light, 2.9-magnitude Cor Caroli.

For my money, globular clusters are the most impressive class of deep-sky object. Yes, there are numerous spectacular nebulae, plenty of lovely open clusters, and a handful of really striking galaxies — but few objects elicit a gasp-out-loud reaction like a telescopic view of one of these immense stellar swarms. That’s a personal perspective, of course, but it’s one based on years of showing the general public the wonders of the night sky through a telescope. Most newbies have a hard time appreciating the subtle beauty of even a “bright” nebula or galaxy, but show them a really good globular, and you’re almost guaranteed a “wow!” Some deep-sky objects are interesting for what they are, while others are appealing because of how they look. Globulars work on both levels. A dense cloud of stars is both visually impressive and conceptually intriguing. 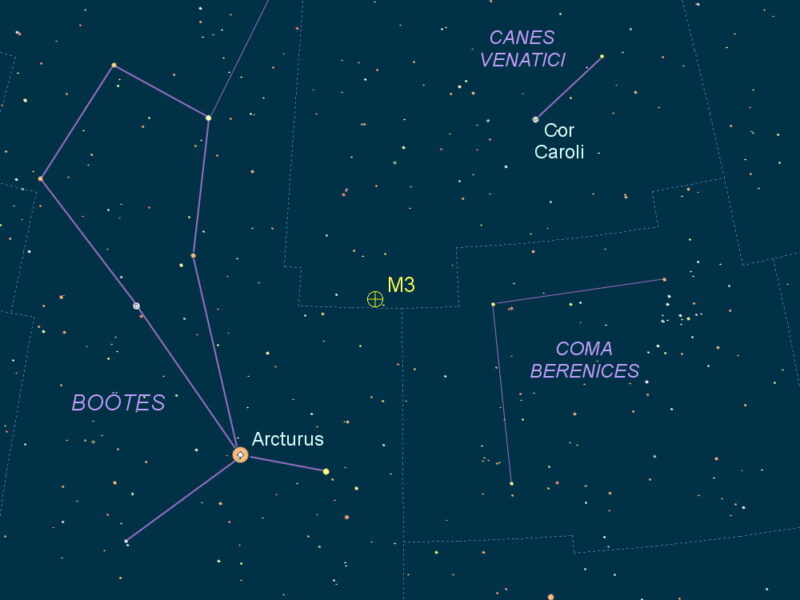 At magnitude 6.3, M3 is an easy binocular target, but like most globular clusters it’s a bit of a disappointment — in 7×50s, M3 simply looks like a star that stubbornly refuses to come to a sharp focus. That “fuzzy star” effect is especially obvious with this particular globular because there’s a similarly bright “real” star sitting ½° to the southwest, serving as a handy comparison target. I find that the higher magnification of my 15×45 image-stabilized binoculars gives the cluster a little more personality — I can begin to perceive that it’s a tight knot of starlight cloaked in a bit of haze. However, M3 really shines in a telescope.

When it comes to globular star clusters, the bigger the scope, the better. I’ve often said that nothing will convince an observer of the virtues of a large-aperture instrument quite as powerfully as a globular cluster. This is especially true for relatively dense clusters.

Astronomers utilize a classification system known as the Shapley–Sawyer Concentration Class to categorize globulars. Under this scheme, Roman numerals are assigned from I (most concentrated toward the center) to XII (least concentrated). As a class VI cluster, M3 falls neatly in the middle of this range, similar to the famous Hercules Cluster, M13 (Class V). 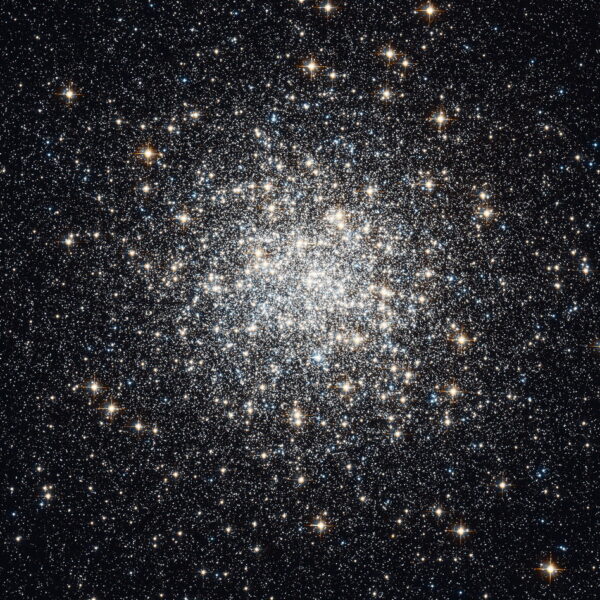 M3 as imaged by the Hubble Space Telescope.
NASA / ESA / STScI / A. Sarajedini (University of Florida)

M3 is said to contain roughly half a million stars, but in even a big backyard telescope most of these suns merge into an unresolvable haze at the cluster’s core. What really makes clusters like this stunning in telescopes is the number of individual stars that pop in and out of view, both against the glow of the cluster’s dense center, and the stars that define its ragged outer extremities.

The most memorable view I’ve ever had of M3 was through a friend’s 17-inch Dobsonian reflector under the dark skies of Mount Kobau, British Columbia. It was a night of excellent atmospheric steadiness that allowed us to boost the magnification to the point where the cluster nearly spilled out of the field of view. Stars upon stars upon stars — far too many to count. Awestruck, I thought to myself, this is what infinity looks like!