Our Milky Way galaxy and its small companions are surrounded by a giant halo of million-degree gas (seen in blue in this artists’ rendition) that is only visible to X-ray telescopes in space.
NASA / CXC / M.Weiss / Ohio State / A. Gupta et al.

Galaxies are pretty big. The Milky Way’s stellar disk, for example, spans some 100,000 light-years. But new observations show that galaxies’ extent is actually much greater than that — more like millions of light-years across.

Sanksriti Das (Ohio State University) presented X-ray observations of the Milky Way-size spiral galaxy NGC 3221 at this week’s virtual meeting of the American Astronomical Society. She and her colleagues took spectra of X-rays emitted by hot gas all around this galaxy, using the XMM-Newton and Suzaku space telescopes to provide direct evidence of the existence of a halo that extends well beyond the galaxy’s stars.

To See a Halo

Astronomers have long been detecting hot halo gas indirectly, by the way it absorbs the light of quasars or disperses brief flashes of radio waves. That’s because the gas is exceedingly difficult to detect on its own. It’s so thinly spread out that there are only 100 atoms of it per cubic meter. For comparison, the tenuous gases that remain after a supernova explosion are on the order of millions, even hundreds of millions of atoms in the same volume. 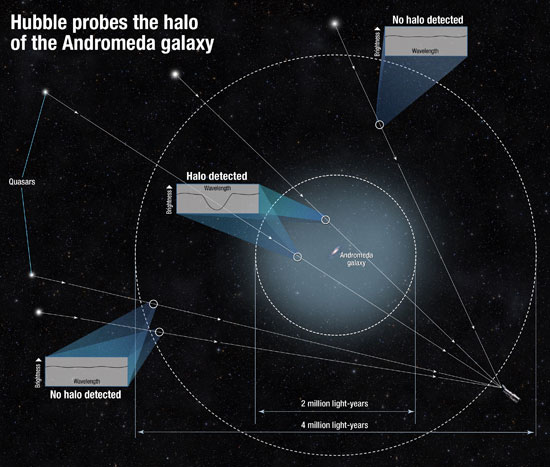 Astronomers have used the light of distant quasars to measure the halo around the Andromeda Galaxy, as the gas is so hot and thin it’s difficult to detect directly.
NASA

Yet, because these hot, hard-to-find atoms are spread across such a huge volume, they amount to the same number as found in all the stars of the galaxy. That’s a huge amount of “normal” matter that astronomers wouldn’t otherwise see. (That’s not to confuse this hard-to-see matter with dark matter — dark matter is a different beast entirely and would remain invisible to X-ray telescopes.)

Astronomers have directly seen the extended halos around only a few galaxies, such as the massive spiral NGC 1961, whose halo extends to almost 200,000 light-years.

NGC 3221, like NGC 1961, is a spiral galaxy, but it’s more akin to the Milky Way in mass. Yet Das’s team detects hot, X-ray-emitting gas all the way out to 500,000 light-years around this galaxy. The 2 million-degree gas outweighs the disk of stars, to the tune of 10 billion Suns.

How Hot Is Too Hot?

While theorists have often assumed that the gas in such halos is uniformly hot, the X-ray observations taken by Das’s team show this isn’t the case. The gas nearer the galaxy is hotter — what’s more, it’s about twice as hot as expected. However, that’s exactly what has led some other astronomers, not involved in the study, to doubt the results.

“I rate this as a bona fide detection,” says Philip Kaaret (University of Iowa). “The question is the interpretation.”

Joel Bregman (University of Michigan) goes a step further, doubting the detection itself. “The observation that Das presented is very challenging,” he notes. “The issue is that one needs to remove a background from the image.”

“I’m not ready to engrave this one in stone, but I look forward to future observations,” Bregman says. Das, too, hopes for additional observations to confirm the halo — and better understand its behavior.

Whether this detection pans out, the researchers agree on one thing: A galaxy’s halo is more than a curiosity, it’s a crucial part of the galactic ecosystem. Halo gas rains down on the galaxy, spurring the birth of new stars. Then the winds of those stars, as well as their eventual explosions as supernovae, fountain gas back out into the halo.

The constant give and take, Das says, means that halos “should be viewed as something in the galaxy rather than around the galaxy.”

How often are there 3 eclipses in a month? | Astronomy Essentials
Are We Watching a Planet Disintegrate? – Sky & Telescope