Using readily available commercial equipment, the pair teamed up to survey the sky for exoplanets. It began a few years ago when Burdanov initiated a pilot survey, originally called the Kourovka Planet Search (KPS), with colleagues from the Ural Federal University in Russia. They looked for exoplanets transiting across their stars, searching for the resulting dips in starlight, just as NASA’s Kepler and TESS space telescopes have done. But the survey carried a twist: Burdanov aimed to survey regions of the sky other programs had skipped, namely the crowded plane of our galaxy’s disk.

Benni had been assisting the KPS team with follow up observations since 2013 from his home near Boston, Mass. When Burdanov moved to the University of Liege, Benni continued the project, now termed the Galactic Plane eXoplanet (GPX) Survey, with an upgraded system that included Burdanov’s enhanced image-processing software. The GPX system consisted of a 279-mm (11-in.) Celestron RASA wide-field survey telescope and an FLI ML16200 camera. Benni operated the entire survey from his home observatory, which he calls the Acton Sky Portal.

To access the galactic plane, which is crowded with stars, GPX trades large sky coverage for high resolution: The system has about 2 arcseconds/pixel, compared to the 4 and 20 arcseconds/pixel for the wider-field Kepler and TESS space telescopes, respectively. “Other surveys tend to avoid [the galactic plane] or have difficulties in finding transit signals there, as stars tend to blend together in images,” Benni explains. The trade-off also

allowed the astronomers to focus on fainter stars, of magnitude 11 to 15. “Other surveys were looking at brighter stars,” adds Benni. “We tried to image a little beyond that to catch something they missed.” 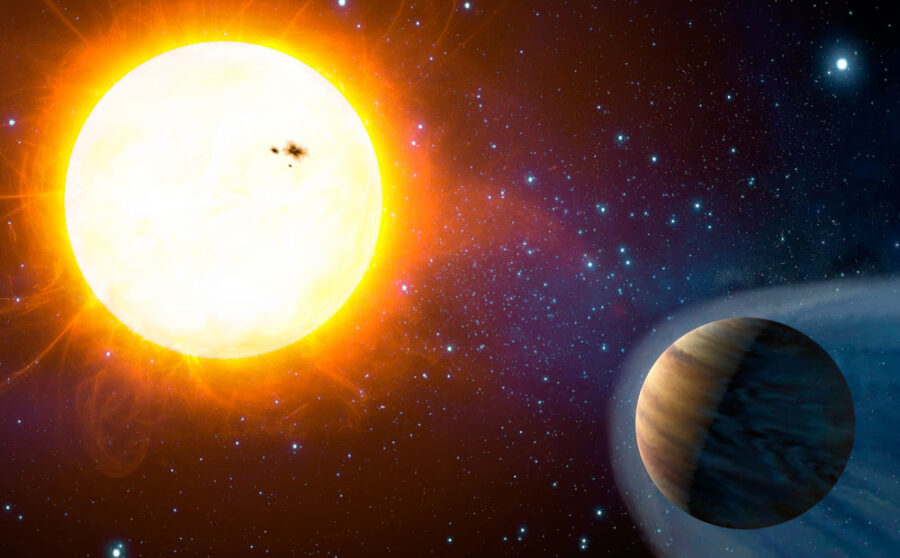 Their first confirmed detection came in 2015, back when the duo was still experimenting with the prototype Kourovka equipment. The team pointed the telescope at a small, randomly selected field near Ursa Major for a few months, accumulate 115 hours’ worth of data, revealing KPS-1b, a transiting hot Jupiter. “The discovery was a fortuitous one,” says Benni. “My son called KPS-1b the ‘lucky duck’ planet.” The find was later validated using radial velocity methods.

KPS-1b is similar to Jupiter in mass and radius but orbits its 13th-magnitude host star every 1.7 days. “The discovery of KPS-1b inspired us to upgrade the camera and add multiple fields to the surveying capability,” Benni says. “That grew into the GPX system.”

Using the revamped GPX setup, the team made its second discovery in 2016. GPX-1b, a brown dwarf 20 times Jupiter’s mass orbiting a 12th-magnitude star slightly more massive than the Sun. The star is rotating quickly, which suggests it’s young, perhaps only about 270 million years old.

The GPX-1b work demonstrated the value of the GPX survey’s unique design and methods: When TESS launched and imaged the same region of the sky, the host star GPX-1 blended with a brighter, 9th-magnitude star less than an arcminute away, and TESS didn’t detect the transits of the brown dwarf companion.

GPX has a higher resolution than the TESS space telescope (2 arcseconds/pixel instead of 20.25 arcseconds/pixel), enabling it to tease apart the GPX-1 host star from a neighboring star. This in turn allowed GPX to capture the brown dwarf’s transits across GPX-1.
Artem Burdanov and Paul Benni

Their most recent discovery came from data collected in 2018: GPX-TF16E-48 is a 15th-magnitude pair of stars, a white dwarf and K-type main sequence star that orbit each other every 7.1 hours. The orbit is edge-on as seen from Earth, making this an eclipsing binary, but it’s a tricky one to spot as the eclipses are only 10 minutes long. Follow-up observations revealed the white dwarf is possibly siphoning gas off its stellar companion and could begin to nova in about 9 million years. 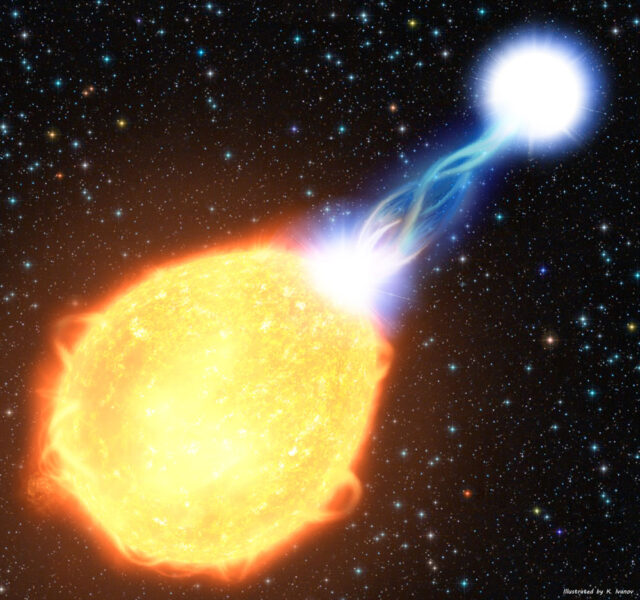 In the system dubbed GPX-TF16E-48, a white dwarf and K-type main-sequence star orbit each other. The white dwarf appears to be pulling material off its companion, suggesting the pair could go nova in several million years.
Kirill Ivanov, Irkutsk State University

GPX shows the potential of professional and amateur astronomers to work together, using commercially available equipment to make discoveries that even world-class instruments might miss.

Further publications on their work are pending. The work continues and, as Benni says, “we keep going.”