Visible light observations from the Hubble Space Telescope and infrared imagery from the Large Binocular Telescope were combined to create this dramatic view of the Ring Nebula. NASA / ESA

Everyone loves this cosmic donut. Like Saturn, the Ring Nebula is a must-see for beginners and seasoned amateurs alike. Whether you’re just cutting your deep-sky teeth or attempting to see its central star — one of visual astronomy’s Holy Grails — the Ring has it all. I’m an incurable ring fanatic, having observed this ghostly gem more than 150 times.

The Ring, also known as M57, is a planetary nebula, one of an estimated 10,000 or more believed to populate the Milky Way Galaxy (but fewer than 2,000 have been cataloged). They’re among the most beautiful and colorful objects in the sky. Many are round with well-defined edges and reminded early astronomers of planets. While they’re anything but, they do have a planetary connection. The Ring and its ilk contribute elements like carbon, oxygen, and nitrogen to the interstellar medium, material later incorporated into the next generation of stars and their attendant planets. 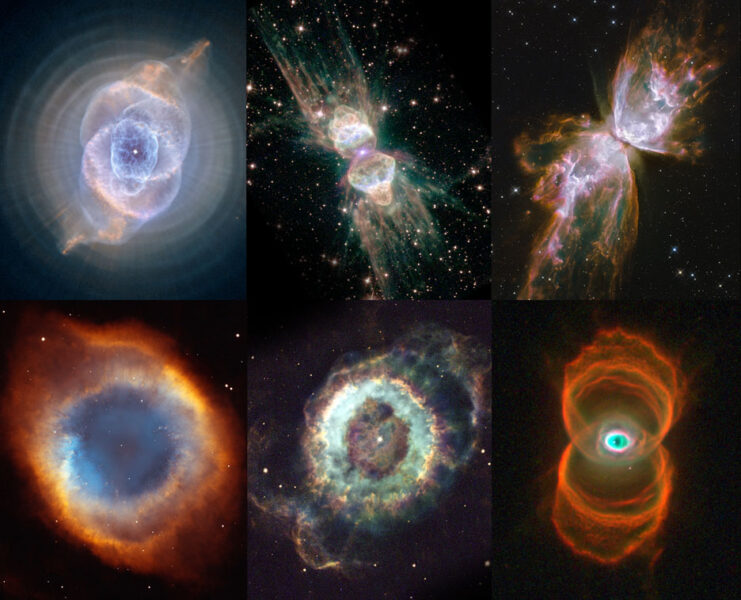 A gallery of planetary nebulae showcases their ephemeral beauty. Clockwise from top left are the Cat’s Eye Nebula; the Ant Nebula; the Butterfly Nebula; the Hourglass Nebula; the Little Ghost Nebula; and the Helix Nebula. NASA

A planetary nebula forms from the expanding shell of gas ejected by a red giant star as it evolves into a white dwarf. Powerful winds from the giant’s blazingly hot core waft the star’s atmosphere into space to create a shell of gas that can assume a variety of forms including spherical, helical, bipolar, and donut-shaped.

As the core compresses through self-gravity it becomes hotter and hotter, exceeding 100,000°C or nearly 20 times the surface temperature of the Sun. Hot enough to emit much of its light in the ultraviolet (UV). One of the reasons planetary nebulae central stars appear so faint is that our eyes don’t detect UV. But the energetic UV photons ionize the expelled gases, making them fluoresce in delicate hues of green, red, and blue like multicolored smoke rings blown from some wizard’s pipe.

Stars that are similar in size to the Sun (and up to about eight times as massive) eventually evolve into red giants, slough off their outer envelopes, and become planetary nebulae, ultimately leaving behind naked white dwarfs. ESA

The giant’s atmosphere continues to expand and fade until all that’s left is the former core, now an extremely compact white dwarf star roughly the size of the Earth. Stellar lifetimes are measured in billions of years but a typical planetary lasts only about 20,000 years, the blink of an eye. For a star between one and eight times as massive as the Sun this is the end game of the aging process. To gaze at the Ring through the eyepiece is to see the future of our own Sun 5 billion years hence. 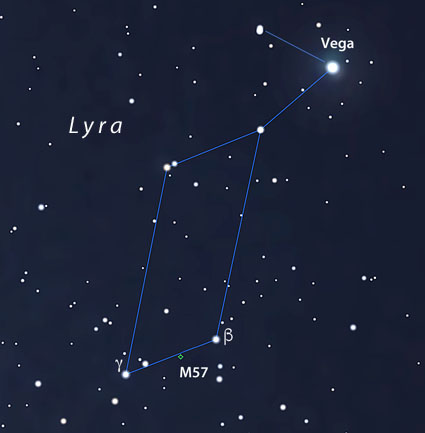 Vega points the way to the Ring, which at magnitude 8.8 is bright enough to show faintly in my 10 × 50 finderscope. With an apparent diameter of 1.3′ and distance of approximately 2,400 light-years its true size is almost 1 light-year across, or a little less than one-quarter of the way from Earth to Alpha (α) Centauri. Even a 3-inch scope will show a small, round ball of silky mist with a darker center. A 6-inch reveals that M57 is shaped more like a football with a 12th magnitude star located 1′ east of the nebula’s center.

Through my 15-inch Dob at low magnification the Ring is a dusty tumbleweed frozen in time against a beautiful field of stars. Recently I studied it through an O III filter with a magnification of 142× and saw something I’d never noticed before. Surrounding the bright ring I glimpsed a much larger ring of glowing haze about 4′ to 5′ across. To confirm the observation I “played the field” with averted vision many times and then compared it to the unfiltered view. 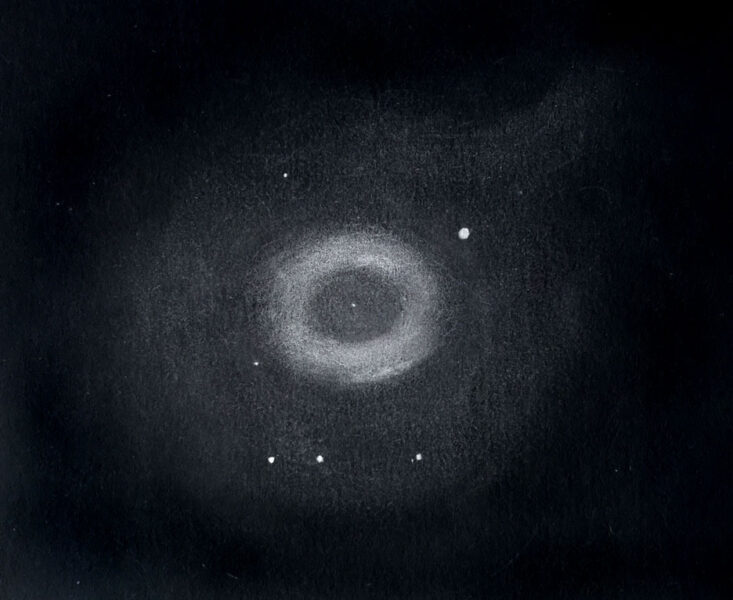 This sketch is a composite of two different views of the Ring Nebula in a 15-inch telescope, one through an O III filter at 142× and another at 428× without a filter. The filtered view shows the faint outer ring with an extension to the southeast. The unfiltered view highlights the nebula’s hazy center, brighter patches within the main ring, and the faint central star. South is up. To learn more about M57 and how to sketch it, see an article by Howard Banich in the upcoming September issue of Sky & Telescope. Bob King

I’ve often seen diffuse halos of scattered light around bright stars but never around a nebula. Deep photos show that the bright ring is embedded in the faint, red glowing ionized hydrogen, and this is apparently what I saw. I encourage you to experiment with different nebula filters and share your views in the comments area.

High magnification works wonders on the Ring and is essential for pinning down the ever-elusive central star, a white dwarf with a mass 0.6 times that of the Sun and a surface temperature around 120,000°C. Despite a total luminosity of 200 times solar it shines at magnitude 15.8. You might see references to 14.8 but that’s clearly too bright. Even in good seeing at 357× and 428× in my 15-inch (which can reach magnitude 16.2) the dwarf flirts at the edge of visibility. But when it briefly pops into view, hoo boy, what a sight. Like the twinkle of a snowflake in sunlight. 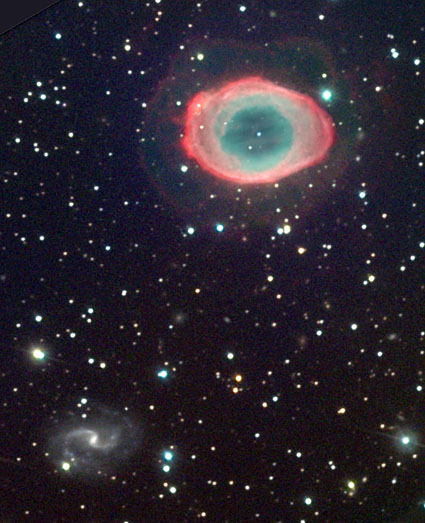 A nest of fainter nebulosity surrounds the familiar bright ring. At lower left is the barred spiral IC 1296. South is up. Adam Block / NOAO / AURA / NSF

The veil of nebulous haze that fills the Ring’s interior doesn’t help make the dwarf any easier to see but it does add a frosty beauty to the scene. So do the faint stars peppering the edges of the annulus. Along with the 12th-magnitude star to the east I also discerned three ~14.5-magnitude stars in a line due north of the Ring and two exceedingly faint (~15.5–16.0) stars to the immediate southwest and northwest.

The eastern and western ends of the ring appeared noticeably fainter than the top and bottom. Careful observation revealed a brighter patch of nebulosity inside the southeastern section of the ring and several bright, crowded knots lining the outer, northeastern periphery. I also took the optional side trip to the retina-busting, 15th-magnitude barred spiral galaxy IC 1296. Located within a telescopic triangle of stars 4′ northwest of the Ring, I eked out a dim patch of haze involved with a 15th-magnitude field star. 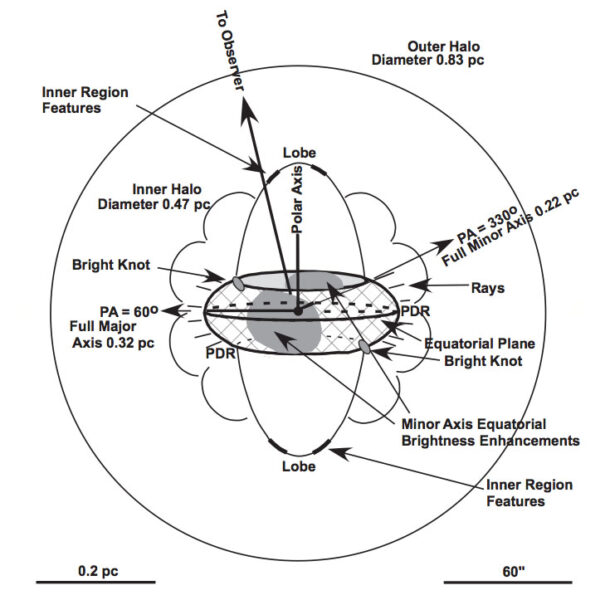 From Earth (upper left) we look nearly straight down on the Ring Nebula. The black dot is the central star. You’ll find a more detailed explanation of the Ring’s morphology in this 2013 paper by C. R. O’Dell et al. C. R. O’Dell, Vanderbilt University; NASA and ESA’s Hubble Space Telescope

Three-D studies of M57 show that it’s shaped more like a barrel than a Cheerio. From our perspective we’re looking down from above through the “hole” of a tilted barrel. Two lobes of ionized gases extend above and below a tire-shaped ovoid of more concentrated material surrounding the white dwarf.

Looking at the Ring Nebula lets us imagine what it might feel like to hover over a celestial object as if passing by in a spaceship. Which we are of course. A pretty blue one.

New Habitable Exoplanet Helps Show Why We Love Space So Much
How often are there 3 eclipses in a month? | Astronomy Essentials