Another spacecraft is joining a growing armada of Sun-observing satellites. The European Space Agency’s Solar Orbiter has just made its first close pass by the Sun on June 15th, which took it to within 77 million km (48 million miles), or roughly twice as close to the Sun as Earth is. This first perihelion, which occurred before the Solar Orbiter enters full science operations, has already provided stunning images of the Sun’s outer atmosphere.

The Solar Orbiter does not go nearly as close to the Sun as NASA’s Parker Solar Probe does, but for good reason. The environment that Parker encounters when it comes within 9 solar radii of the Sun’s visible surface is too harsh for any existing camera to directly image the Sun. Solar Orbiter’s distance enables its multiple cameras, which peek out peepholes in the spacecraft’s heat shield, to take in the full disk of the Sun and zoom in to capture details in its atmosphere.

This mosaic of images shows the full disk of the Sun as viewed by the Extreme Ultraviolet Imager (EUI) and the Polarimetric and Helioseismic Imager (PHI). The yellow images in the top row shows EUI’s view at 17 nanometers, while the red views in the right column show EUI’s view at 30 nm. (Both are false-color images, because the wavelengths imaged are outside the visible range.) While the yellow images show the outermost atmosphere, the solar corona, the red images show a lower layer of the atmosphere named the transition region. The middle panel combines EUI images with ones from the NASA’s Solar Dynamics Observatory. The left images show magnetic field maps of the Sun derived from PHI data. Finally, the bottom middle image shows the Sun in visible light, sans sunspots.
Solar Orbiter / EUI Team; PHI Team / ESA & NASA

The mission has just released the spacecraft’s first images, captured on May 30th, just before perihelion. Taken for calibration purposes, these extreme-ultraviolet images show a quiet area of the Sun, where nothing special was expected to be happening. But the images held a surprise for researchers: Small flares nicknamed “campfires” flicker all over the Sun’s corona.

“The Sun might look quiet at the first glance, but when we look in detail, we can see those miniature flares everywhere we look,” says David Berghmans (Royal Observatory of Belgium), principal investigator of the Extreme Ultraviolet Imager (EUI), which took the images.

These mini-flares might play a role in heating the solar corona, the outer atmosphere which is counterintuitively 200 times hotter than the Sun’s visible surface. While there’s no doubt that the Sun’s writhing magnetic fields provide the energy to heat the corona, how the magnetic energy is converted to heat has remained a mystery for decades. The heat from the combined sparks of small but abundant mini-flares (sometimes termed nanoflares) could be responsible.

The video below captures the flares with details as small as 400 kilometers across. It represents the closest views we’ve ever seen of the Sun.

(You might notice a small dust bunny in the upper right of the video. “We joke that is our exobiology experiment,” Berghmans says. “In fact it’s a sensor defect.” The defect has earned a variety of nicknames, including “the tardigrade” and “gummy bear.” It even appears to move, due to processing to remove shakiness in the images. In the future, image processing will also remove the defect itself by interpolating from nearby pixels.)

But it may be too early to draw the comparison between the campfires seen here and the hypothesized nanoflares. The team members must still combine the data from the many instruments the Solar Orbiter carries. And others offer caution as well. “The campfires have been seen before in many guises,” says Hugh Hudson (University of Glasgow, UK). “Associating campfires with nanoflares? I think this is a non-starter simply because of the very nice intermittency that they exhibit, both in space and in time.” 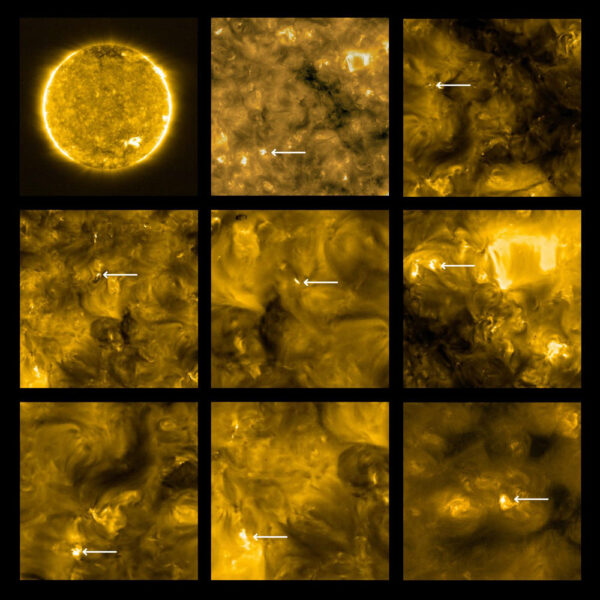 Hudson instead sees more promise in other data the Solar Orbiter offers. “What is very new and very important with Orbiter (not counting its polar views) is just the stereoscopy at such high resolution,” he explains. For the first time, Solar Orbiter will help untangle the three-dimensional layers of the Sun’s atmosphere, especially when working together with other solar observatories on or around Earth.

What’s Next for the Solar Orbiter

Within two years, Solar Orbiter will fly within ¼ a.u. of the Sun’s visible surface, resulting in images twice as sharp as the ones released today. And the scientists are only beginning to understand the images that the instruments produce. Berghmans expects that changes to image processing and even spacecraft steering will also improve the images over time.

Technically, the ground-based Daniel K. Inouye Solar Telescope has better eyesight than Solar Orbiter; its first-light images released in January have a resolution of 30 km. But while the Inouye Telescope is limited to viewing visible light that makes it through Earth’s atmosphere, Solar Orbiter is seeing ultraviolet light and X-rays that our atmosphere blocks.

Solar Orbiter’s viewpoint is also decidedly unique. All views of the Sun — whether from Earth or from Earth-orbiting or even Sun-orbiting satellites — have come from within the ecliptic plane, the plane in which the planets orbit the Sun. The Solar Orbiter will provide the first views of the Sun from a polar perspective. The orbiter flies in an increasingly inclined orbit that will ultimately take it 33° above the equator, giving the spacecraft a polar view of the Sun that we’ve never seen before.

This diagram depicts the Solar Orbiter’s journey from 2020 to 2030, including flybys past Venus and Earth. Its orbits gradually approach the Sun while simultaneously altering the orbit to a more inclined angle that allows a view of the Sun’s poles.
ESA

While these first images show huge promise for the mission, researchers and the public alike will have to be patient. Full science operations won’t begin until March 2022. And the spacecraft won’t start probing the solar poles until 2025, with its best polar views coming in 2027. Nevertheless, the campfire discovery already points to what we can gain by imaging the Sun from close up.