In this conceptual view, each Starlink satellite unfurls its single solar panel.
SpaceX

The Starlink megaconstellation, which will consist of at least some 12,000 satellites and possibly up to 42,000, will be serving up broadband internet from low-Earth orbit. But it has worried astronomers, professional and amateur alike, after the first launch in 2019 proved what a bright multitude it would be. Now, with 420 satellites in orbit and more to come soon, SpaceX is showing that it’s taking astronomers’ concerns seriously.

The new document, posted on the Starlink website, clarifies why the satellites are so bright, and what can be done to mitigate the problem. Namely, the company is attempting a software fix that will dim satellites as they raise their orbits early on, and a hardware fix — a Sun visor — that will dim the satellites once they reach their operational altitude.

The first “VisorSat” will launch with the next Starlink batch. By June, SpaceX says, all Starlink satellites will be equipped with deployable Sun visors.

SpaceX’s first attempt to darken the Starlink satellites, dubbed “DarkSat,” launched in January. While the company had announced it would put a dark coating on parts of this test case in order to reduce its brightness, the details were vague. 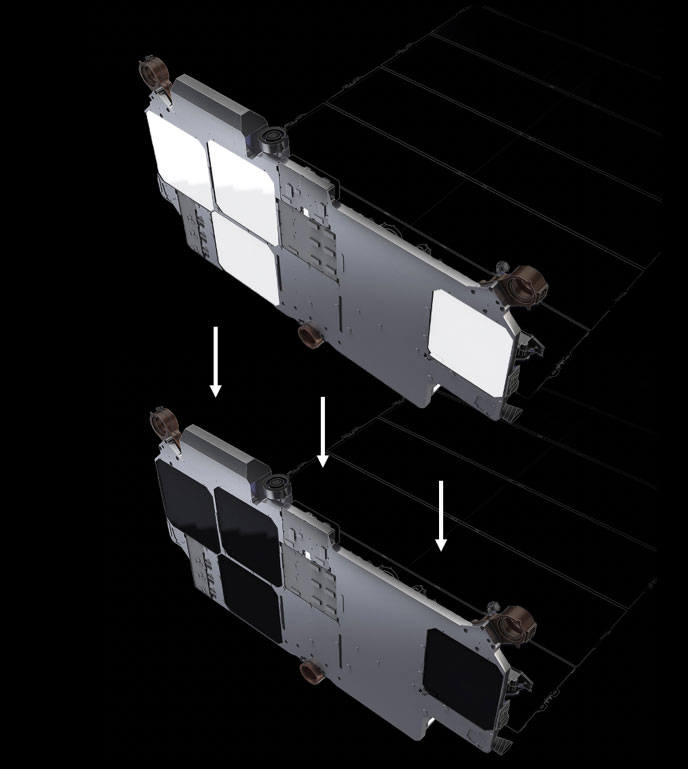 DarkSat, an earlier experiment, had a dark coating on the phased array and parabolic antennas. However, while DarkSat was dimmer than its comrades, the coating did not reduce the reflections enough and also resulted in thermal balance issues.
SpaceX

The new document clarifies which pieces were darkened. The brightest parts of the satellites are the white phased array antennas on the bottom, the white parabolic antennas on the sides, and the white backing of the solar array. For DarkSat, engineers had darkened the phase array and parabolic antennas. (Surprisingly, the solar panels don’t present as much of a problem. They do glint in the sunlight, but for the vast majority of the time that glint is facing a direction other than down.)

Ultimately, studies showed that the paint job did not do enough to reduce the satellite’s brightness, and it caused thermal problems to boot.

While the satellites’ brightness at operational altitudes to worry astronomers, they made the news on a regular basis in the weeks following a launch. A “string of pearls” would appear in the night sky and show up in photographs as the satellites raised their orbits.

During the orbit-raising period, the satellites appear brighter because not only are they at lower altitudes, but their solar panels are positioned differently, to reduce the drag the spacecraft feels. The white back of the solar panels reflected diffuse light to observers on the ground. Now, SpaceX is testing a roll maneuver that will put the solar panel in line with the Sun, presenting a “knife’s edge,” and ultimately reflecting less sunlight.

SpaceX cautions that there are some limiting factors, that might prevent a satellite from always presenting that knife’s edge to the Sun. But the good news is, the maneuver is a software change. Once engineers know that satellites can roll without damaging their ability to communicate with the ground or collect solar power, it will be straightforward to have all raising-orbit satellites do the same thing.

But while the time a satellite spends raising its orbit gets more attention — because the satellites are closely packed and bright — it’s the satellites at operational altitude that still pose a threat to professional astronomers. 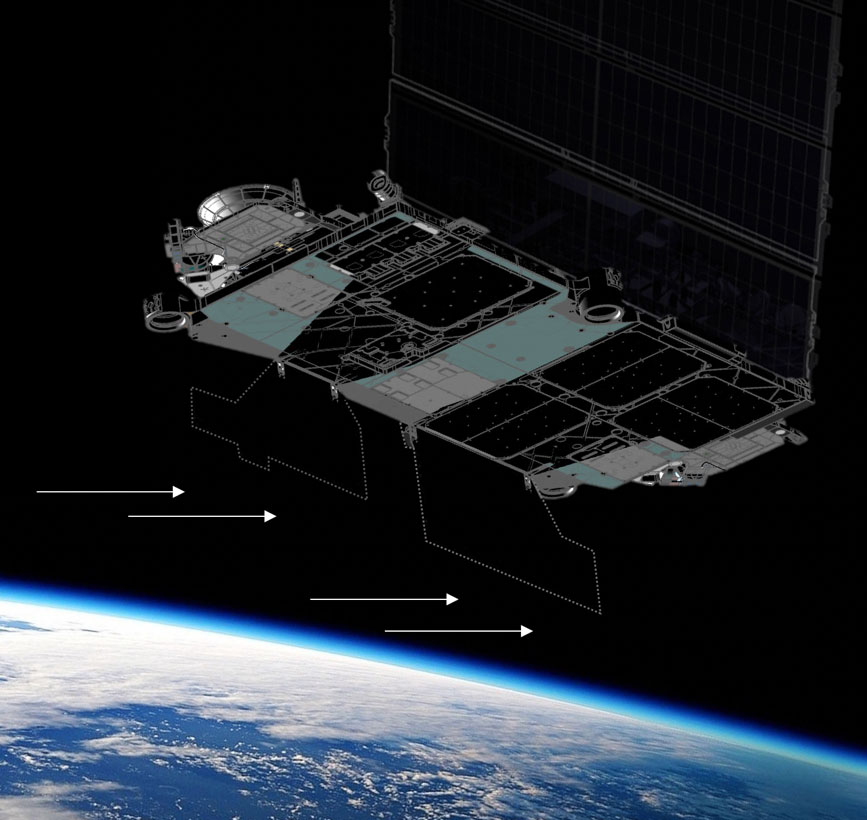 Artist’s conception of VisorSat, where a Starlink satellite will be equipped with a deployable visor that shades the antennas from sunlight. The visor will be transparent to radio frequencies.
SpaceX

The Vera C. Rubin Observatory in Chile, due to start collecting science data in 2022, faces the worst-case scenario because its detectors are both very sensitive and have incredible fields of view. The Rubin Observatory, after all, is designed to video the entire night sky every few days, ultimately collecting a decade’s worth of reel in which astronomers hope to discover asteroids, supernovae, and many other transient events that might otherwise slip them by.

The Rubin Observatory therefore presents SpaceX with its biggest challenge, as Starlink satellites at their current brightness would saturate detectors and ruin whole images. For that reason, Tony Tyson (University of California, Davis) and others with Rubin Observatory have been communicating directly with SpaceX engineers, including providing them with target numbers to hit.

While coating the bright parts of the satellite didn’t work, SpaceX hopes to do better with its plan for a Sun visor (initially called a Sun “umbrella). The visor provides the benefit of black paint by blocking sunlight from all of the white parts of the main body, as well as the antennas, while avoiding the thermal balance problems.

The first VisorSat will launch in May, and if all goes according to plan all satellites from June forward will be equipped with the visor.

SpaceX has also said that, in addition to providing orbital elements to help astronomers (and others) track its satellites, it’s also now providing predictive data ahead of launch.

“While it will not be possible to create satellites that are invisible to the most advanced optical equipment on Earth,” the document reads, “by reducing the brightness of the satellites, we can make the existing strategies for dealing with similar issues, such as frame-stacking, dramatically more effective.”

“I’m cautiously optimistic,” Tyson told the American Astronomical Society, “but it will be months before we can validate joint solutions to mitigating many of the effects of even the darkened Starlinks on the Rubin Observatory’s wide-field survey data.”