NASA’s New Horizons spacecraft looked back at Pluto after its closest approach on July 14, 2015, and snapped this photo of the planet’s hazy, layered atmosphere. On the sunlit side (right), the smooth expanse of Sputnik Planum is flanked to the west (above, in this orientation) by rugged mountains up to 3,500 meters high.
NASA / JHUAPL /APL / SRI

Years ago my younger daughter and I used to kick the soccer ball around the front yard in the summer months and then gorge on handfuls of freezer-pops to cool down. I’d like to imagine that frigid Pluto might have a similar chilling effect on a steamy, midsummer night.

There’s only one way to find out. Point a telescope at it. Pluto used to be the coldest planet, but after it status was changed to dwarf planet in a vote cast at the 2006 General Assembly of the International Astronomical Union (IAU) it’s now just the coldest orb most of us will ever lay our eyes on. Located 5 billion kilometers from Earth, Pluto has a surface temperature around –240°C, or just 33 degrees above absolute zero. I feel the heat draining from my core already. 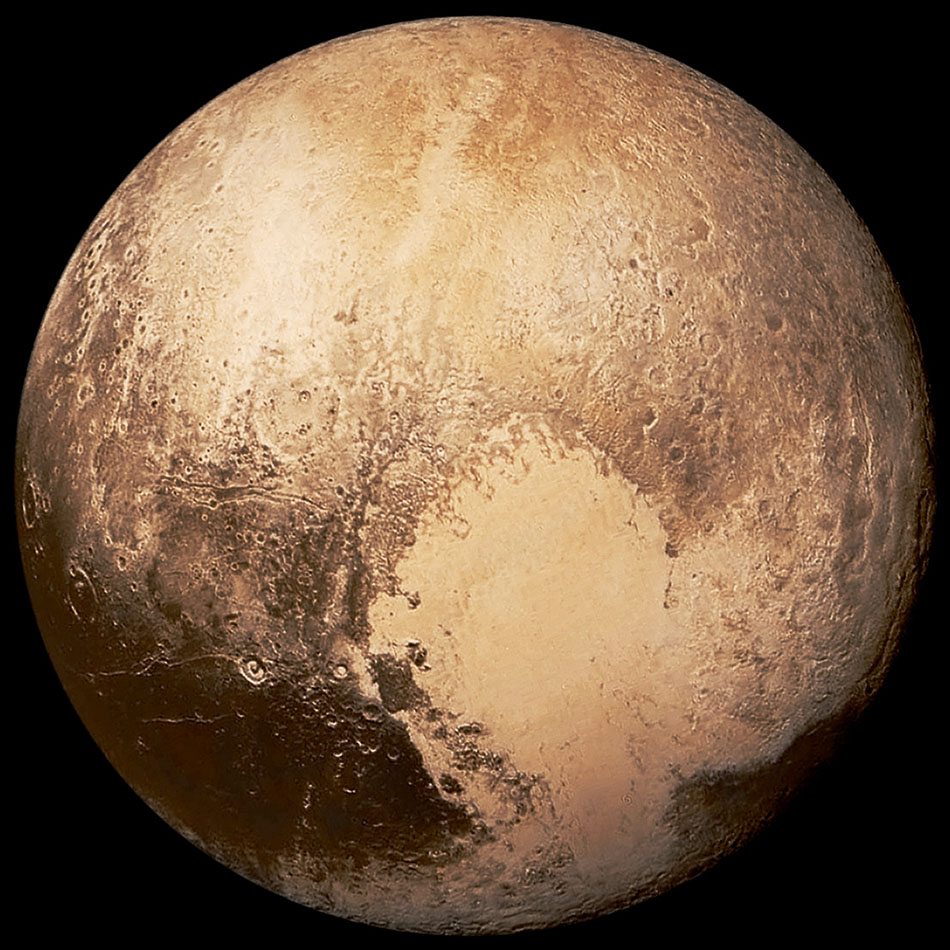 Through a telescope this flyspeck world glimmers at magnitude 14.3, not exactly what you’d call a tempting target. To glimpse it you need a dark, moonless night and an 8-inch or larger instrument. Pluto requires a measure of patience and determination. Navigating star fields to find the icy prize can feel like hacking through the jungle in search of that lost city of the Incas. OK, it’s not that hard.

Why bother with such a faint object? Pluto is the most remote world we can directly experience in the solar system. “Directly” meaning that its light can get inside our head in a real, physical way. The Sun pitches photons at the biggest dwarf planet at the speed of light, and Pluto bats them back — a 10-billion-kilometer volley that takes more than 9 hours, the equivalent of a day’s work with a leisurely lunch thrown in. 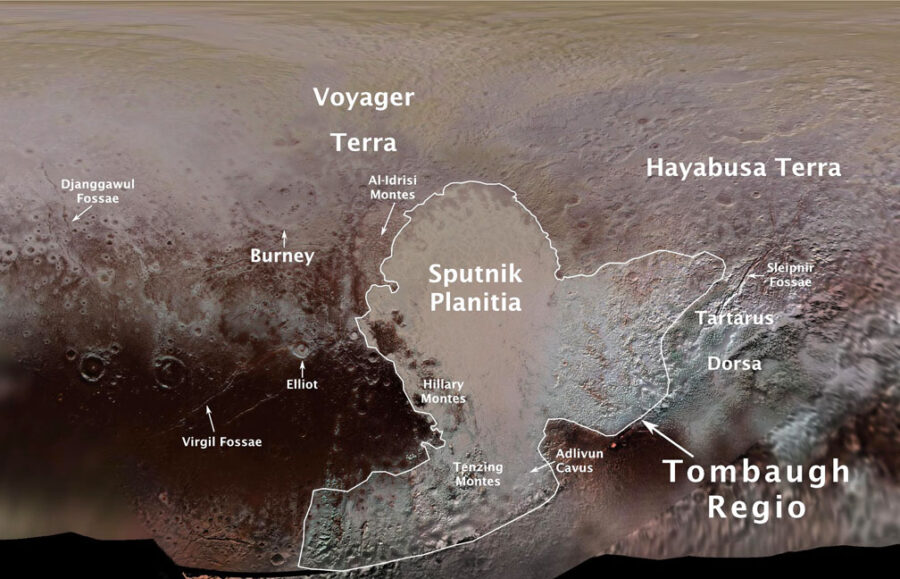 Imprinted in that massless stream of particles are clues about Pluto’s personality. The dwarf planet is just 2,377 kilometers across — two-thirds as large as the Moon — yet possesses five satellites and a nitrogen-rich atmosphere flecked with clouds. Sunlight breaks apart methane in the air which then recombines into hydrocarbons that fall to the surface in a sticky drizzle, coloring parts of this frozen world cinnamon. Data from New Horizons hint at the existence of a water ocean trapped beneath its icy shell.

During closest approach New Horizons revealed features smaller than half a city block on Pluto’s surface. This photo covers an area (top to bottom) from the al-Idrisi mountains to the shoreline of Pluto’s “heart” northwest of Sputnik Planitia.
NASA / JHUAPL /APL / SRI

Nitrogen glaciers creep from Sputnik Planitia powered by deep-seated convection while water-ice mountains hard as granite soar to 3,500 meters, their summits capped in bright methane ice that glints in the weak Sun. Sound exotic? Extremely cold temperatures at Pluto’s great distance allow ice to express itself in ways we can’t imagine on the more clement Earth. 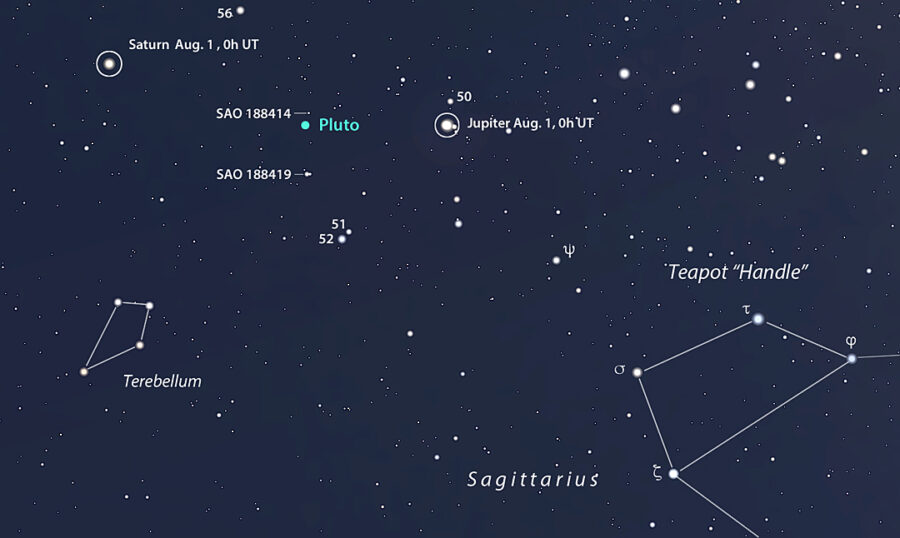 When you make your shot at Pluto this summer use this map to get oriented. Pluto is located in eastern Sagittarius almost midway between Jupiter and Saturn near the Terebellum asterism. A bright Moon will interfere this week, but a lengthy, dark-sky window opens from August 6–23. Planet positions are shown for 0h UT on August 1st, with stars plotted to magnitude 9.5.
Stellarium

Pluto is relatively easy to track down thanks to Jupiter and Saturn. It lodges almost midway between these two giants for the remainder of the summer. With the map as your guide, begin at Jupiter and star-hop to the dwarf planet at low magnification by making little patterns among the brighter stars along the way. I usually fashion quickie triangles, lines, and arrows as I go.

Once you’ve arrived, increase the magnification to 150× or more and relish the view. Feel the chill. Imagine crossing a crevasse in a nitrogen glacier. Look back toward the Sun — only 57 arcseconds across at Pluto’s distance — and see it as the star it is.

Pluto shuttles back and forth between the stars SAO 188414 (magnitude 7.4) and SAO 188419 (5.9) between now and November. These charts along with this B&W pdf guide will deliver you to the dwarf planet’s doorstep.
Sky & Telescope

Before you depart, note Pluto’s position relative to nearby field stars so that when you return at the next opportunity you’ll see that it has moved. Believe it or not its motion is detectable in just 24 hours — Pluto moves about 1.4 arcminutes per day in July, making its night-to-night movement easy to trace in the rich star fields of Sagittarius.

Can you spot Pluto? I photographed the dwarf planet on July 22 and July 23, 2020, with a 480-mm focal lens on a tracking mount and then animated them with GIFmaker. Alignment wasn’t perfect and seeing conditions differed each night, but Pluto clearly jumps out.
Bob King

You can also follow it photographically as I did on two successive nights using a 480-mm focal length lens on a tracking mount with an exposure of 66 seconds and ISO 1600. To my delight I captured the planet without difficulty. Seeing Pluto jump back and forth, I experienced a tingle of excitement akin to what Clyde Tombaugh must have felt when he when he compared two plates taken on January 23 and 29, 1930 and made his historic discovery of Pluto .

Opposition occurred on July 15th with the dwarf planet now well-placed for viewing at nightfall. Enjoy it while you can. Pluto won’t grow any brighter or closer in our lifetime. When it reaches aphelion in 2114 the frostbitten orb will have faded to magnitude 16 and be out of reach of all but the largest amateur telescopes. In fact, it won’t grow as “bright” as it is right now until the year 2210. Funny but true — observing Pluto has become something of an urgent matter.