“Spectacular.” “Amazing.” “Beautiful.” “Awesome.” Those are just a few of the words first-time observers have used to describe Comet NEOWISE (C/2020 F3). I agree 1,000 percent — this is one incredible comet!

NEOWISE transitions from the dawn to the dusk sky this week. For a time you’ll still be able to view it at both ends of the clock, but by July 18th it rapidly approaches the northern horizon and disappears from view. For the northern U.S., Canada, and much of Europe the comet is circumpolar and visible all night long this week. It reaches maximum northern declination (+48°) on July 20th when it never dips below the horizon for locations north of latitude 42°N. 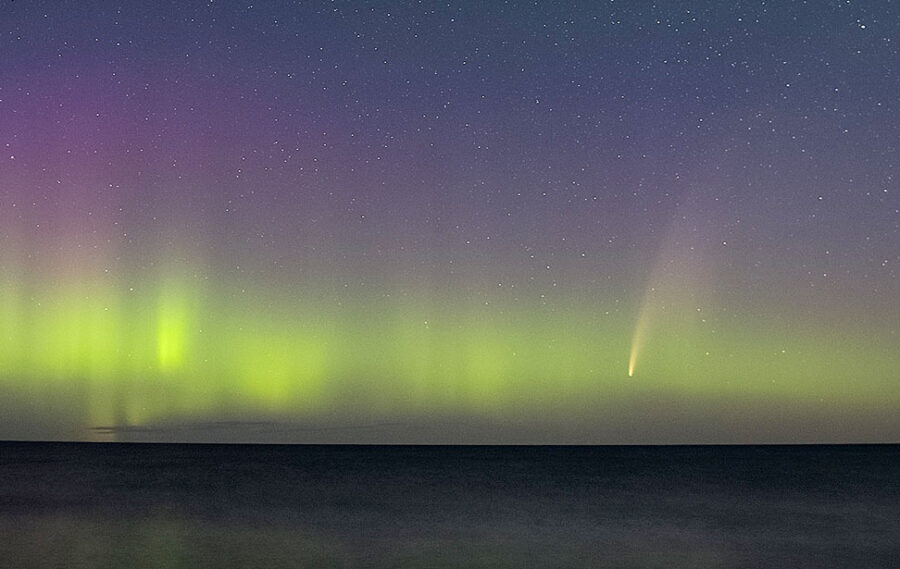 Comet NEOWISE has generated tremendous interest and rightly so. It’s the first easily visible naked-eye comet to grace northern skies since PanSTARRS (C/2011 L4) in 2013 and before that, McNaught (C/2006 P1) in 2006-07. While PanSTARRS reached 1st magnitude it possessed a much shorter naked-eye tail, while McNaught was primarily a Southern Hemisphere object. You have to reach all the way back to 1997 to Hale-Bopp (C/1995 O1) to find a comparable comet. 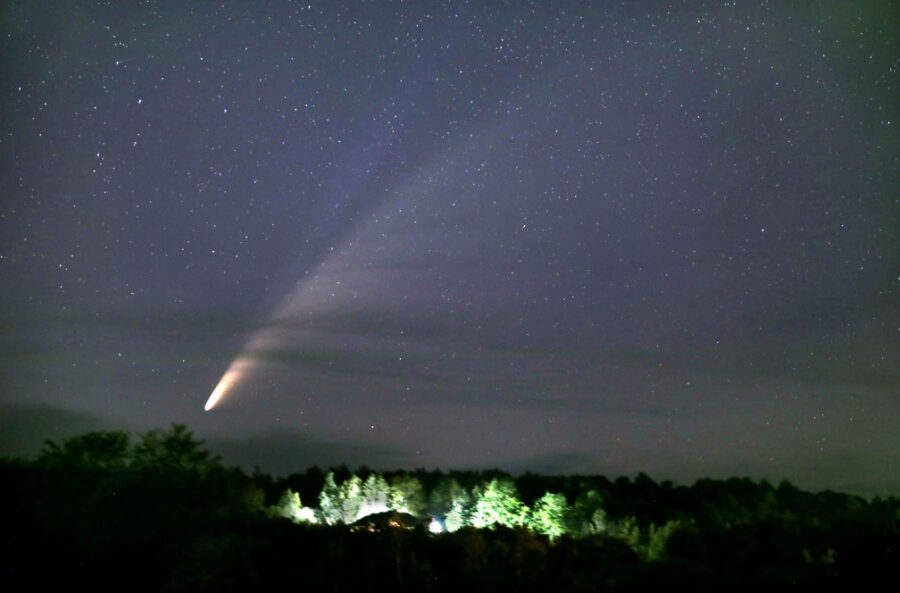 It’s all about the tail when it comes to public appreciation of comets. The longer and brighter the better. Although NEOWISE has faded from magnitude +0.5 to about magnitude 2 since early July, its tail has been growing continuously, from a short stub at perihelion to more than 15° long two weeks later. A combination of factors are responsible for the apparent lengthening of the tail, including waning moonlight, the comet’s current visibility in a dark sky, and its increasing altitude and proximity to Earth. Closest approach occurs on July 23rd at a distance of 103 million kilometers. 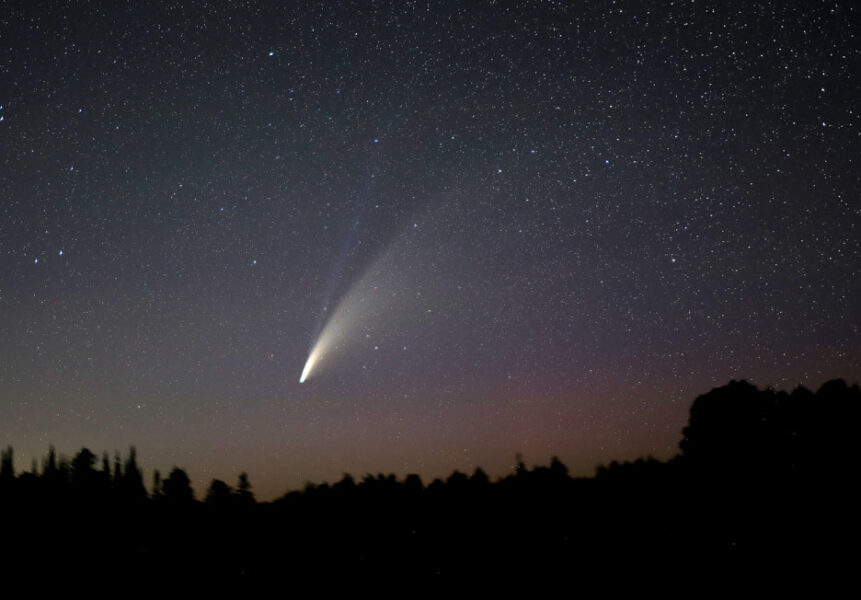 At nightfall on July 14th I could trace the comet’s dust tail for 10° with the naked eye from a dark-sky site. At its far end it broadens to approximately 3°. A faint, broad fan of material is visible halfway up the dust tail to the right. The blue dust tail is faintly visible in 50-mm binoculars. The red band is airglow.
Bob King

Most observers, including those new to comet-watching, can trace the tail to 4° to 5° visually and about double that in a pair of 50-mm binoculars. With the naked eye it looks like a feather plume or crooked finger pointing to the horizon. My friend Burt said it reminded him of a light beam. Others liken it to E.T.’s finger, complete with glowing fingertip, from the movie E.T. the Extraterrestrial. When I saw it on July 14th from a dark, moonless site my jaw dropped. The comet dominated the northern sky with its 10°-long fanned tail and bright coma. Whether viewed from the country or city observers agree on one thing: NEOWISE is absolutely stunning in binoculars. 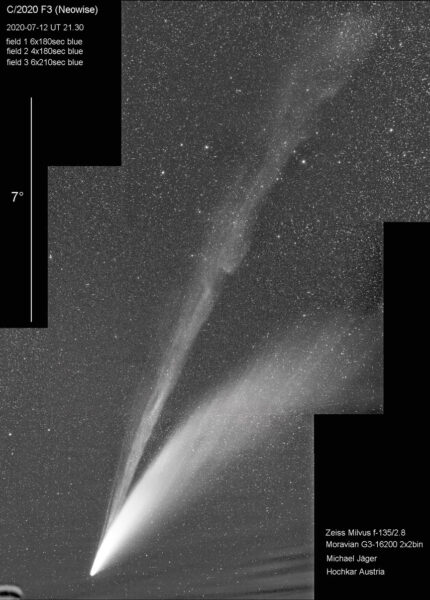 While the telescopic view reveals additional structures in the coma and intensifies the comet’s colors, only binoculars comfortably reveal the full breadth of the tail. The dust tail extends (currently) even beyond the typical 5.5°–6.5° binocular field of view, while the fainter ion tail unfurls to more than 15°.

This time-lapse of Comet NEOWISE was photographed near Anza, California, shortly before sunrise on July 12th.
Dave Kodama

Due to the comet’s low altitude the ion or gas tail is difficult to see visually but it’s faintly visible alongside the dust tail in binoculars and telescope. It’s composed primarily of carbon monoxide gas vaporized from cometary ice. Struck by ultraviolet light from the Sun it glows a vivid aqua. The ion tail interacts with the solar wind to create the delightful knots and kinks seen in Michael Jäger’s deep photograph.

Both tails originate from sublimating ice on the 5-kilometer-wide comet body which is hidden from view inside the false nucleus, where the escaping dust is most concentrated. On July 14th through my 10-inch telescope it was a tiny, bright “light bulb” at the head of the comet’s tail which looked for all the world like streamlined fog. Telescopic observers are encouraged to study the nucleus closely for jets — geyser-like blasts of dust escaping from the comet itself — as well as possible fragmentation.

A salty tail, too! 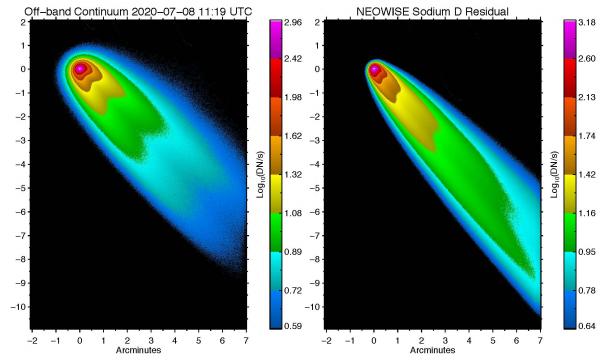 False-color images of Comet NEOWISE recorded by the Planetary Science Institute’s Input/Output facility on July 8th show (left) light reflected from dust — similar to the naked-eye view — and (right) light emitted by sodium atoms. The sodium tail is too faint to see visually in a telescope.
Jeffrey Morgenthaler, Carl Schmidt

“Atomic sodium responds to sunlight in a similar way to cometary dust, but its momentum kick comes from a very particular wavelength of yellow light – the same color seen in sodium-vapor streetlamps,” Morgenthaler writes. 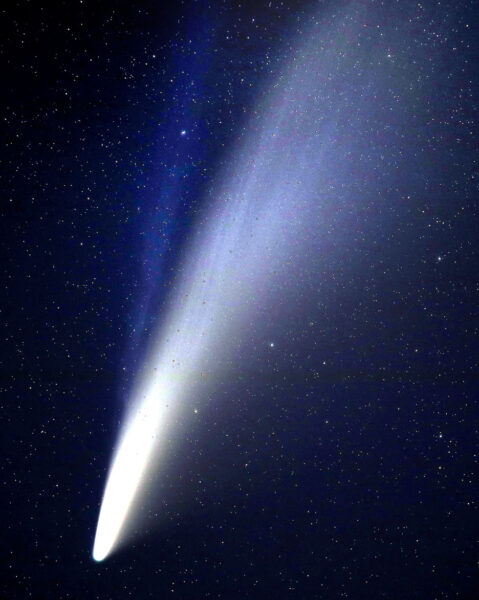 Even a 200-mm telephoto lens reveals much detail in the comet including the blue ion tail and parallel rays or synchronic bands inside the dust tail. Details: 200-mm, f/2.8, ISO 800, and a 62-second exposure.
Bob King

When seeking NEOWISE at dusk look low in the northwestern sky for a fuzzy “star” with a short tail resembling a shuttlecock. This photo was taken at 10:30 p.m. on July 12th from Duluth, Minnesota.
Bob King

From many mid-northern latitude locations you can start looking as early as 9:45–10 p.m. low in the northwestern sky. Good fortune gave us Capella as a morning guide star. Now the Big Dipper steps in to assist (see map below). You’ll need to find a place with a wide-open view to the northwest and removed from bright city lights in that direction. Scout a location during the daytime so you don’t have to drive around looking for one at night.

Arrive there between 9:45 to 10 p.m. local time with a pair of binoculars. Any will do but I really like the 7×50s or 10×50s because they combine a large field of view and moderate magnification with good light-gathering ability. Before you look for the comet be sure to focus the binoculars on a bright star or planet first. That will make the fuzzy comet easier to spot. 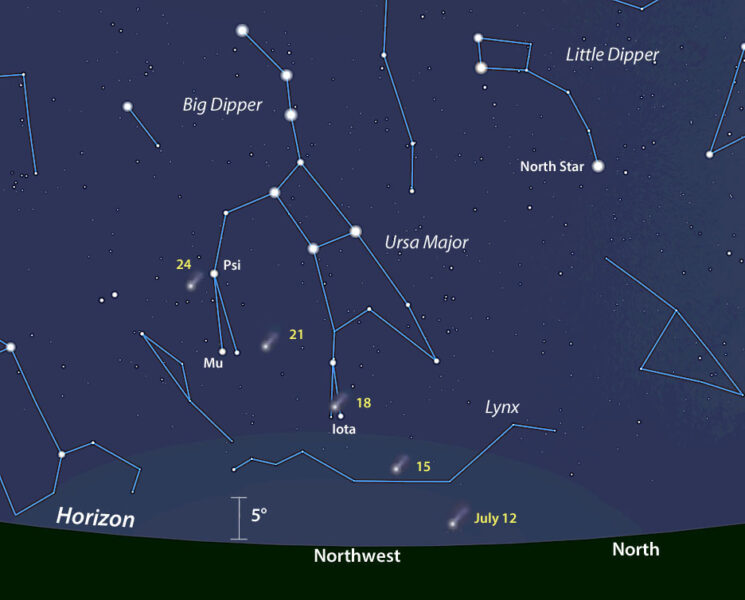 Comet NEOWISE positions are shown every 3 days for one hour after sunset July 15–23. The comet rapidly increases in altitude this week.
Stellarium with additions by the author

Use the map to help you point the binoculars in the right direction, then slowly “sweep” the area until you spot a little point of light with a short tail sticking out of it. If you start early you may not see the comet with the naked eye, but give it some time. When the sky gets darker the comet not only becomes a gorgeous sight in binoculars but also appears to the naked eye as a faint, fat streak of light.

Corrected for atmospheric extinction — the dimming of objects near the horizon where the atmosphere is thickest — NEOWISE shines around magnitude 1.5–2 at the moment (July 15th). And although the comet will fade in the coming weeks (it’s expected to drop to 3rd magnitude by July 18th and to 4 by the 25th) it’s also climbing higher and higher in the evening sky, which will partially offset its dimming. Try to catch it every clear night you can because you never know when clouds could roll in. 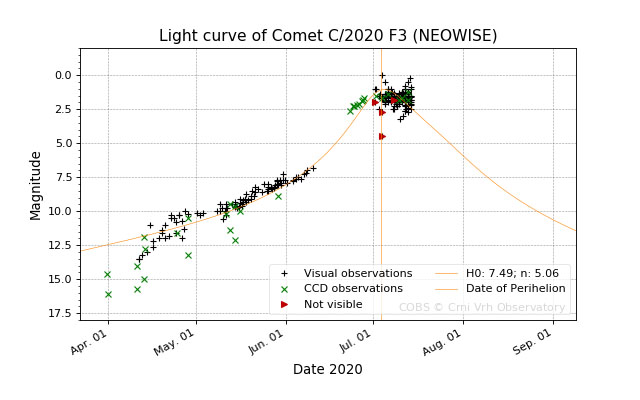 The comet’s light curve through July 14th shows a peak in brightness around its July 3rd perihelion followed by a slow fading.
Comet Observation Database

The comet strides past a number of galaxies as it travels southward from Ursa Major into Coma Berenices in the next few weeks. Highlights include a close pairing with the Black Eye Galaxy (M64) on August 3rd followed by an attractive grouping with the globular clusters M53 and NGC 5053 on August 6th. NEOWISE will shine around magnitude 6 at the time, the naked-eye limit. The Moon returns to brighten the scene starting July 23rd.

Observers in the far southern U.S. will have to wait just a bit longer to see NEOWISE — it will pop over the northwestern horizon starting July 16th and only get better from there. Southern Hemisphere skywatchers, who are undoubtedly chomping at the bit, will get finally get their NEOWISE fix around July 28–30.

My older daughter and I share the comet on a beautiful but mosquito-rich dawn on July 11th.
Bob King

Due to COVID-19 concerns it’s difficult or impossible to share the comet in a group setting. But we can share it with our families and even a small groups of friends with proper social distancing. Kids love adventures and staying up late. What better way to create a special memory, and you might just inspire your child to make a lifelong connection to the stars.

I wish you many happy nights with this vagabond from the Oort Cloud. Like my friend Patricia said: “What’s a little less sleep when you have a comet visiting Earth?”