The annual Perseid meteor shower peaks next month on August 12th (and is pretty active still for a couple of days around the time). The last-quarter Moon rises after midnight and, while bright, should still allow for a decent show if the shower performs for us this year. If the weather cooperates for you, there is no better way to spend an evening than lying back on a blanket or lawn chair under the sky, counting shooting stars and making wishes. Bring a date or a good friend for optimal enjoyment.

Of course, if you’re a regular reader of this blog, your evening would benefit from another enhancement: the occasional click of a nearby camera shutter.

Set Up for Success

You can photograph a meteor shower with a simple setup of a camera, tripod, and shutter-release cable. Choose a camera and wide-angle lens that will capture as much of the sky as possible — look for a wide-field lens of 14 mm or so that is at least f/2.8 or faster. A fisheye lens can work well to capture the entire sky all at once.

Set exposure times the same as you would do for nightscape projects such as Milky Way shots. But note that meteors are practically instantaneous, so your exposure time won’t matter very much, as long as your shutter is open when one zings through your camera’s field.

The Perseids happen as Earth passes through a debris field left over from Comet Swift-Tuttle. The peak of the shower occurs in the early morning hours as Earth turns your location into the leading stream of the shower. The radiant where all the meteors appear to originate from is in the constellation Perseus, which rises in the northeast just after midnight. Pointing your camera in that general direction should increase your chances of catching more meteors. Just keep in mind that meteors near the radiant will leave shorter trails than those appearing further across the sky.

One photographic opportunity is to capture a nice nightscape with a meteor passing through it. If you take a lot of images, eventually you’ll catch a “shooting star.” Even when there is not an active meteor shower going on, it’s not uncommon to catch a “sporadic” meteor in a nightscape image. During a shower, of course, your chances or recording a meteor are greatly enhanced. 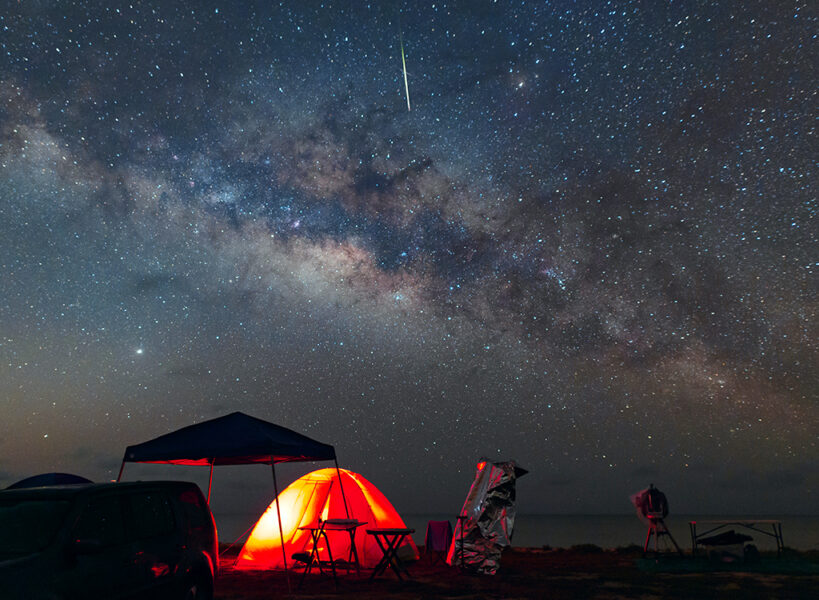 This option, however, is a bit of a letdown for a “meteor shower.” What you likely want is to capture many meteor trails, but taking a single image with a full night’s exposure is not practical for multiple reasons. So the typical approach is to set your camera to, say, a 15-second exposure in continuous fire mode, lock down the shutter button, and take continuous shots for several hours. You can then assemble a composite showing many meteor trails against a starry field, or perhaps assemble a time-lapse showing the actual “shower” taking place.

You are going to take several hundred images with this approach. Make sure you have as large a memory card! If possible, shoot in RAW format, like you would for any astrophotography project. For time-lapses, with proper exposure, you can get away with shooting in JPG format if necessary. 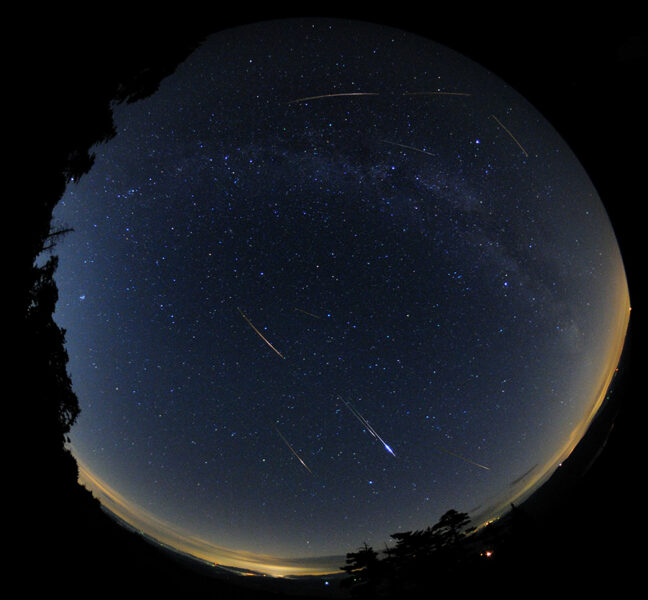 A fisheye lens is a great way to capture a meteor show and demonstrates the radiant (source) of the meteors.
George Fleenor

Do Away with Dew

An additional consideration for those of us who don’t live in a dry, desert region: If you’re going to leave a camera outside pointed at the open sky till dawn, you’ll likely get dew on the lens during these humid summer nights. Those flexible dew straps we use on our scopes or eyepieces can be repurposed to wrap around your camera lens and will provide some protection against the dew. Try to pick up a few meant for 2-inch eyepieces. These should be adequate without overheating your glass. If you don’t have a dew-prevention system, an easy workaround is to pick up some disposable chemical hand warmers and strap these to your lens with elastic bands. 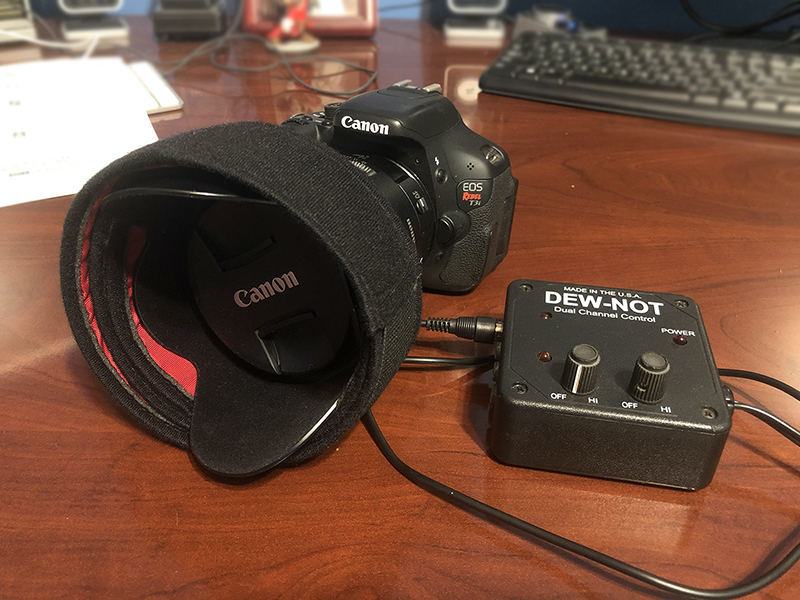 A camera lens is just as likely to dew up overnight as your telescope. Take care so you don’t waste a precious opportunity or clear night!
Richard S. Wright Jr.

The downside to heating your camera lens is that too much heat will change its focus as the glass heats up and expands. Set your dew controller for some constant output and give your lens a half-hour (at least) to an hour (if possible) to stabilize to its maximum temperature before you do your final focus. Do this after dark when the ambient temperature has already begun to drop. The shower is most active in the early morning hours, so ideally you could start this process well into the night after the days’ heat has significantly dissipated. 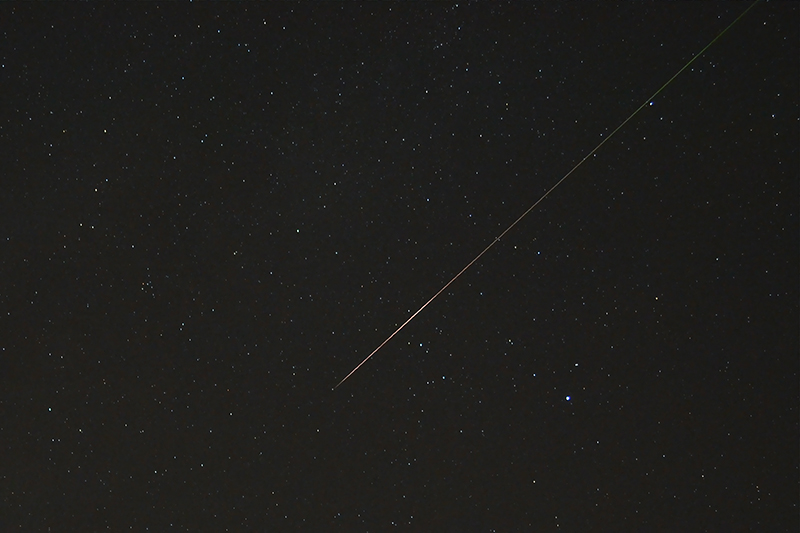 Meteor streaks are distinct from airplanes or satellite passes as they often contain a characteristic bright/wide burst near the end of the trail.
Skylor Fleenor

Once you have all your photos (hopefully some with meteors in them), there are many ways to quickly process them all and assemble them into a time-lapse animation. Adobe Lightbridge, Camera Raw , and even the proprietary software that came with your camera can batch-process large groups of RAW-format exposures without the need to open each individually.

Your favorite photo editing software will likely support layers and masks, and you only need to combine the images that caught meteor streaks. Select one frame as your master starfield and then use masks to bring in the meteor streaks from the other images. Remember, you don’t need to use every single frame captured, just the ones that contain meteors. A more accurate approach is to align all the images that contain meteors on the starfield before combining them so that the meteors all properly point back to the radiant.