Artist’s illustration of the joint European-Russian Trace Gas Orbiter (TGO), which has been orbiting Mars since 2016. Image via ESA/ ATG medialab/ Space.com.

Is the methane in Mars’ atmosphere geological in origin, arising from processes in the Martian rocks? Or could it be a sign of life? Mars methane has been detected by telescopes on Earth, orbiting spacecraft and even the Curiosity rover on Mars. Meanwhile, European Space Agency (ESA) scientists have been frustrated by the lack of detection of methane by their Trace Gas Orbiter (TGO) – part of the ExoMars mission – designed in part specifically to measure methane. The orbiter has been circling Mars since 2016, but, so far, no methane. Now scientists think they have an answer.

The new findings come from scientists in the U.K. and Russia. They might help to explain why TGO hasn’t detected methane on Mars, ESA has reported. The answer has to do with two other gases in the atmosphere, carbon dioxide (CO2) and ozone (O3).

Researchers published two new peer-reviewed papers on July 27, 2020, in Astronomy & Astrophysics. One deals with the carbon dioxide detection and the other with the ozone.

While TGO still hasn’t directly detected methane, it did make another intriguing discovery that might explain why. It detected both carbon dioxide and ozone in the regions where methane had been expected to be seen. Both gases have been known about for a long time, and Mars’ atmosphere is mostly carbon dioxide, so why is this surprising? 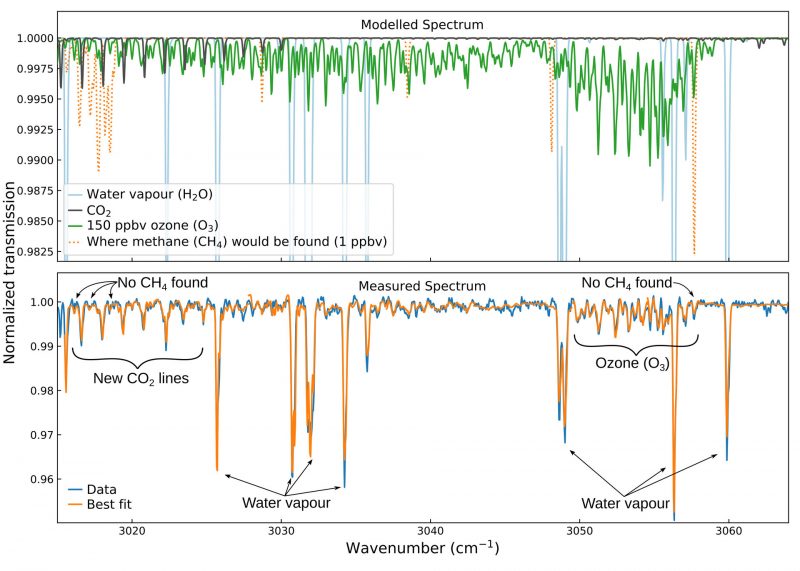 Spectral signatures of carbon dioxide (left) and ozone (right) on Mars, as detected by the ACS instrument on the Trace Gas Orbiter (TGO). Image via Olsen et al./ ESA.

Kevin Olsen of the University of Oxford, who led the U.K. study, explained in a statement:

These features are both puzzling and surprising.

They lie over the exact wavelength range where we expected to see the strongest signs of methane. Before this discovery, the CO2 feature was completely unknown, and this is the first time ozone on Mars has been identified in this part of the infrared wavelength range.

TGO made the observations after studying the Martian atmosphere for a full Martian year, using its Atmospheric Chemistry Suite (ACS). ACS is extremely sensitive, and can show scientists how these gases interact with light. The researchers were not expecting to see ozone in the part of the infrared wavelength range where methane was expected to be seen. Previous observations relied upon seeing the ozone signature in the ultraviolet, a technique which only allowed measurement at high altitudes (over 20 km [12 miles] above the surface). ACS, however, can map ozone down at lower altitudes as well. From the ozone paper:

We report the first observation of the spectral features of Martian ozone (O3) in the mid-infrared range using the Atmospheric Chemistry Suite Mid-InfaRed (MIR) channel, a cross-dispersion spectrometer operating in solar occultation mode with the finest spectral resolution of any remote sensing mission to Mars.

The ability to simultaneously resolve these species has an impact on current and past attempts to measure the abundance of methane in the atmosphere of Mars.

In this region and time period, corresponding to the northern autumn equinox, we were able to observe significant amounts of ozone in the mid-infrared at altitudes below 30 km [19 miles].

Ozone absorption below 30 km in the mid-infrared range has important implications for searches for atmospheric methane. Past observations of methane in the atmosphere of Mars (Formisano et al. 2004; Krasnopolsky et al. 2004; Mumma et al. 2009; Webster et al. 2015) were a driving cause of the development of the ExoMars TGO mission. CH4 should have a relatively short lifetime in the atmosphere of Mars (several hundred years), meaning current observations require an active source (Lefèvre & Forget 2009). A key objective of the TGO mission is to determine with certainty whether or not CH4 is present in the atmosphere of Mars and what its spatial and temporal variability is, and to localize any possible sources. This story continues to be intriguing as the first results from TGO reported an upper limit on the order of 50 pptv (Korablev et al. 2019), and ACS MIR observations continue to reveal no methane after one MY. In its place, we have instead found the rare and previously undetected signatures of O3 and a new CO2 magnetic dipole band (Trokhimovskiy et al. 2020).

Another graph highlighting the unexpected carbon dioxide signature – a magnetic dipole absorption band of the molecule – as detected by the ACS instrument on the Trace Gas Orbiter (TGO). Image via Trokhimovskiy et al./ ESA.

ACS also saw carbon dioxide at the infrared wavelength range where they expected to see methane, which was also unexpected. Alexander Trokhimovsky of the Space Research Institute of the Russian Academy of Sciences in Moscow, who led the Russian study, said:

Discovering an unforeseen CO2 signature where we hunt for methane is significant. This signature could not be accounted for before, and may therefore have played a role in detections of small amounts of methane at Mars.

As noted by Meghan Bartels in an article for Space.com, the odd alignment of these two gases where methane had been expected suggests that they are interfering with the detection of methane by TGO. From the ozone paper:

The observed spectral signature of ozone at 3000–3060 cm -1 directly overlaps with the spectral range of the methane (CH4) v3 vibration-rotation band, and it, along with a newly discovered CO2 band in the same region, may interfere with measurements of methane abundance. 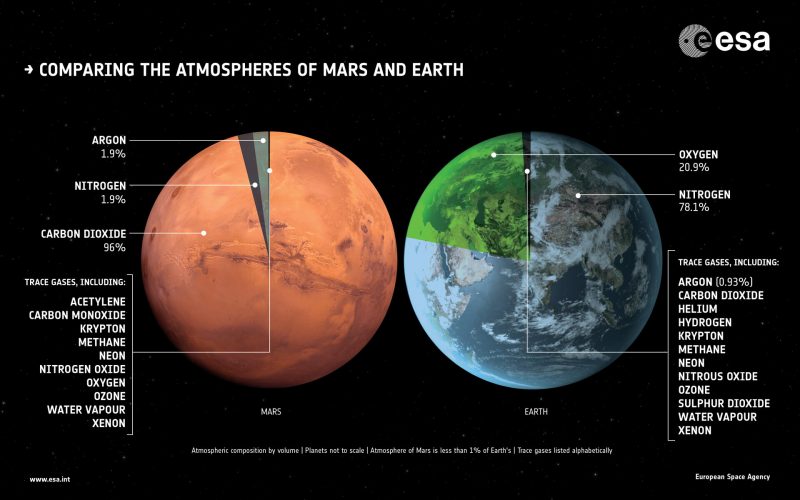 Comparison of the atmospheres of Mars and Earth. Image via ESA. 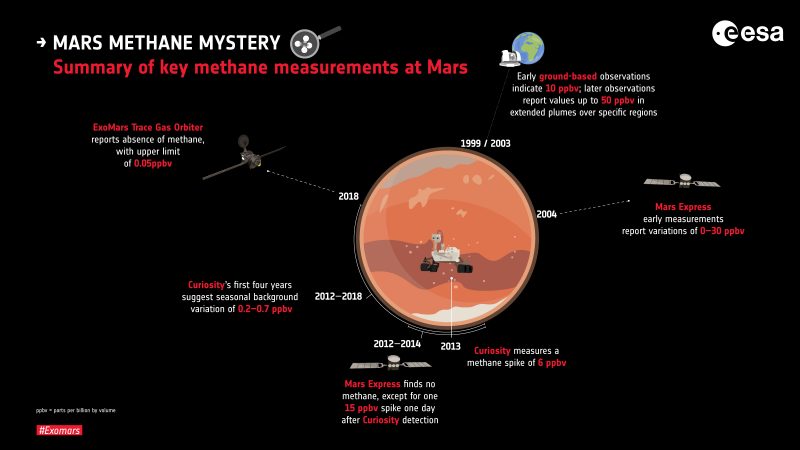 These findings do not directly disagree with those of other missions, since the observations were mostly done at different times from those that did find methane, and TGO is designed to sniff out very tiny amounts of methane, not larger plumes as seen before (although even those plumes are very small compared to methane plumes on Earth). Olsen said:

In fact, we’re actively working on coordinating measurements with other missions. Rather than disputing any previous claims, this finding is a motivator for all teams to look closer; the more we know, the more deeply and accurately we can explore Mars’ atmosphere.

The researchers wondered if previous observations from Earth, Mars Express (using the Planetary Fourier Spectrometer, or PFS) or Curiosity (using the Tunable Laser Spectrometer, or TLS), could have mistaken carbon dioxide and/or ozone for some of the methane measurements, but that is considered to be unlikely. From the ozone paper:

CO2 and O3 alone cannot account for the detections made by both teams. In the case of PFS, the previously unknown CO2 features would impact all observations equally, as CO2 is always present and well-mixed. The PFS team has instead identified CH4 in only a small number of observations (Formisano et al. 2004; Giuranna et al. 2019). Furthermore, we computed spectra with O3 at two and three times the quantities in our observations, and the sheer magnitude of CH4 observed by these latter authors (15 ppbv) is far too large to be easily mistaken for O3.

In the case of TLS, which takes measurements of CH4 at the surface and mostly at night where and when the O3 abundance is greatest, again, it is unlikely that the large quantity of CH4 observed (up to 9 ppbv) resulted from O3, yet the latter may interfere in the measurement of the background level of methane in the so-called enriched mode as both ozone and methane should sustain the same enrichment.

For ground-based observations, strong O3 absorption features from Earth’s atmosphere must first be removed before retrieving mixing ratios for Mars (Krasnopolsky 2012; Mumma et al. 2009); O3 must be accounted for, although this step makes the retrieval more difficult (Zahnle et al. 2011). Finally, in the case of all previous observations, the rapid evolution and disappearance of CH4 are still not explained, although ozone chemistry is very rapid, with a lifetime on the order of days. 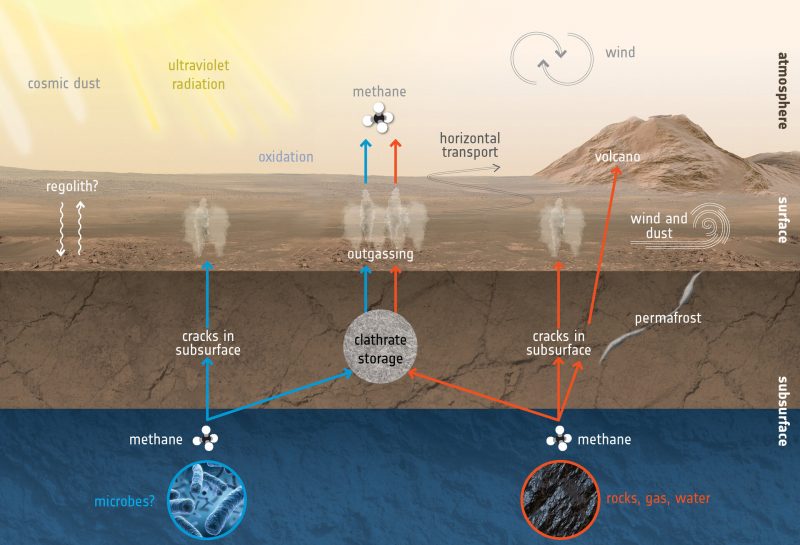 The possible methods by which scientists think methane can be created and destroyed on Mars. Image via ESA.

The results will not only help scientists to better track down methane, but also learn more about the Martian atmosphere overall. Alexander said:

These findings enable us to build a fuller understanding of our planetary neighbor.

Ozone and CO2 are important in Mars’ atmosphere. By not accounting for these gases properly, we run the risk of mischaracterizing the phenomena or properties we see.

Together, these two studies take a significant step toward revealing the true characteristics of Mars: toward a new level of accuracy and understanding.

TGO’s primary mission is to detect trace gases that could originate from either geological or biological processes. The ExoMars mission overall is a joint effort between Europe and Russia. According to TGO Project Scientist Håkan Svedhem:

These findings are the direct result of hugely successful and ongoing collaboration between European and Russian scientists as part of ExoMars.

They set new standards for future spectral observations, and will help us to paint a more complete picture of Mars’ atmospheric properties – including where and when there may be methane to be found, which remains a key question in Mars exploration.

Additionally, these findings will prompt a thorough analysis of all the relevant data we’ve collected to date – and the prospect of new discovery in this way is, as always, very exciting. Each piece of information revealed by the ExoMars Trace Gas Orbiter marks progress towards a more accurate understanding of Mars, and puts us one step closer to unravelling the planet’s lingering mysteries.

We still don’t know the origin of Martian methane, but the new studies from Europe and Russia of other gases in the atmosphere will help to refine and narrow down the possibilities.

Bottom line: ESA’s TGO orbiter has unexpectedly detected carbon dioxide and ozone in Mars’ atmosphere where the elusive methane should be.

Source: First observation of the magnetic dipole CO2 absorption band at 3.3 um in the atmosphere of Mars by the ExoMars Trace Gas Orbiter ACS instrument

Source: First detection of ozone in the mid-infrared at Mars: implications for methane detection