Artist’s illustration of the possible disintegrating planet in the nearby planetary system, known as DMPP-1.
Mark A. Garlick / Haswell / Barnes/Staab / Open University

Among the wealth of exoplanets we’ve discovered beyond our solar system, some are temperate, some less so. New observations have now revealed what may be a particularly inhospitable environment: a planet literally disintegrating as it orbits its host.

Peering Through the Shroud

With initial observations in 2015, the Dispersed Matter Planet Project (DMPP) promised an innovative approach to hunting for exoplanets closely orbiting their hosts. Using high-cadence, high-precision radial velocity measurements, the project targets bright nearby stars that shows signatures of being shrouded in hot circumstellar gas. By looking for tiny radial-velocity wiggles in the star’s signal, the DMPP team hopes to detect small planets that are losing mass as they orbit close to their hot hosts. 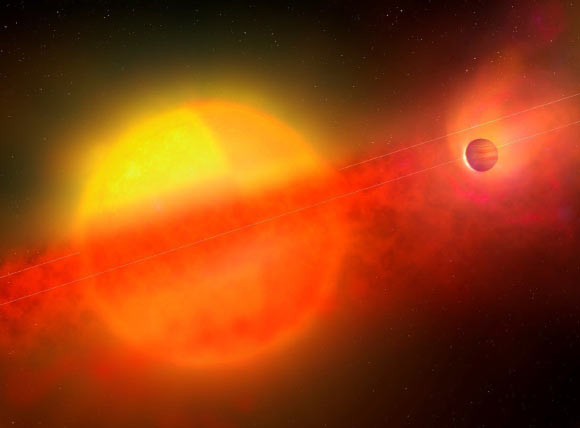 In December 2019, DMPP announced its first discoveries: six planets orbiting around three different target stars. Now, in a new publication led by scientist Mark Jones (The Open University, UK), the team has revisited the first of these systems, DMPP-1, with follow-up photometry from the Transiting Exoplanet Survey Satellite (TESS).

Intriguingly, the radial-velocity-detected planets are not the only signals from this system.

Missing the Expected, but Finding the Unexpected

DMPP-1 is a 2-billion-year-old star located just over 200 light-years away. The radial-velocity observations of this system revealed the gravitational tugs of four planets all orbiting with periods of less than 19 days. The radial-velocity data suggest that this system is probably near edge-on and contains three super-Earths and one Neptune-like planet. 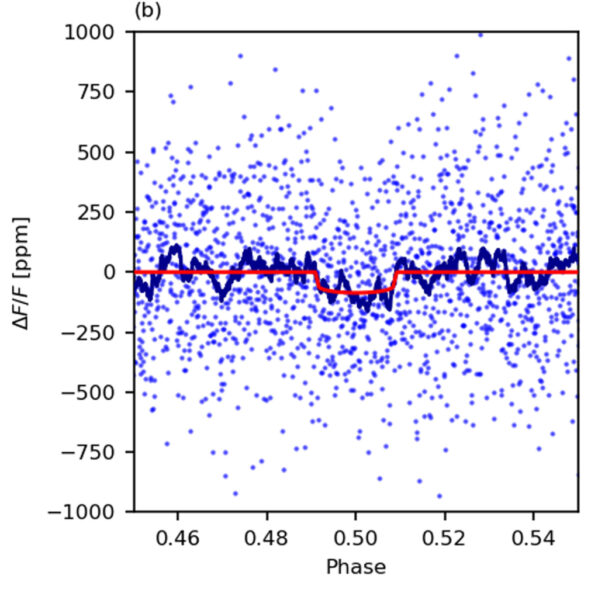 Jones and collaborators began their photometric follow-up by searching TESS data for evidence of these four planets transiting across the host star’s face. Interestingly, they found no sign of transits at the predicted periods — indicating that the four radial-velocity planets are either smaller than expected, or that the system isn’t quite edge-on after all, so the planets don’t pass directly in front of the star.

The authors did, however, find a new signal: a weak transit detection with a period of just ~3.3 days. This signal doesn’t match any of the known radial-velocity planets.

What might this marginal detection be? Its variable transit depths, short period, and apparent small size are all consistent with a catastrophically disintegrating exoplanet — a close-in, small, rocky planet that is so irradiated by its host that its rocky surface is being sublimated. As time goes on, such a planet will eventually disintegrate into nothing.

This transit signal still needs to be confirmed with additional follow-up photometric observations. Assuming it proves to be a true detection, however, such a disintegrating, rocky planet orbiting a bright nearby star would provide a veritable gold mine of information.

The depths of the seven detected transits are highly variable, with one even consistent with a depth of zero! This variability is common for disintegrating planets, as the cloud of ablated material is the primary cause of the transits.
Jones et al. 2020

By exploring the transit signals from DMPP-1 with future technology like the James Webb Space Telescope, we will be able to examine the composition of the ablated material, potentially revealing clues as to how hot, rocky inner planets form and evolve.

This post originally appeared on AAS Nova, which features research highlights from the journals of the American Astronomical Society.

Galaxies Are Even Bigger Than You Think – Sky & Telescope
Has mystery of universe’s missing matter been solved? | Space