The diligent observations of a backyard astronomer paid off with a planetary discovery on a distant world. Dubbed “Clyde’s Spot,” the find highlights the ongoing collaborative efforts of amateur and professional astronomers to track the constantly changing features on worlds throughout the solar system.

The story begins on the morning of May 31, 2020, when amateur astronomer Clyde Foster was observing Jupiter from his home in Centurion, South Africa. Foster was observing and imaging Jupiter from his roll-off roof observatory using a 14-inch Schmidt-Cassegrain telescope equipped with a methane filter, when he noticed a white spot very near Jupiter’s iconic Great Red Spot.

“The outbreak was quite dramatic at this wavelength, but much less noticeable in the RGB and infrared images,” says Clyde Foster. “I initially thought it may have been an impact, but the general consensus was that it was an intense convective outbreak.” 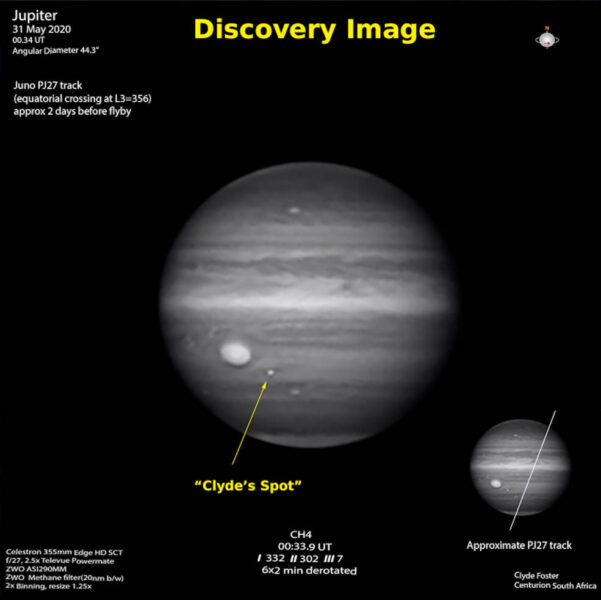 Jupiter is a swift rotator, spinning on its axis once every 10 hours, and the spot was not apparent to observer Andy Casely based in Australia just hours prior. A spirited discussion flashed across the message board associated with NASA’s JunoCam instrument as well as Facebook forums on planetary imaging, alerting imagers around the world to the emergence of the new storm.

“I immediately opened up communication as to whether the upcoming Juno flyby would be able to capture to capture the outbreak,” Foster says. “Candice Hansen (NASA-JPL) was able to confirm that they would, so we waited with anticipation for the images to be transmitted back to Earth.”

Juno’s looping orbit brings it within 4,200 km of Jupiter’s cloud-tops every 53 days, and the next perijove pass (number 27 for the spacecraft) would take Juno right over Clyde’s Spot on June 2nd. 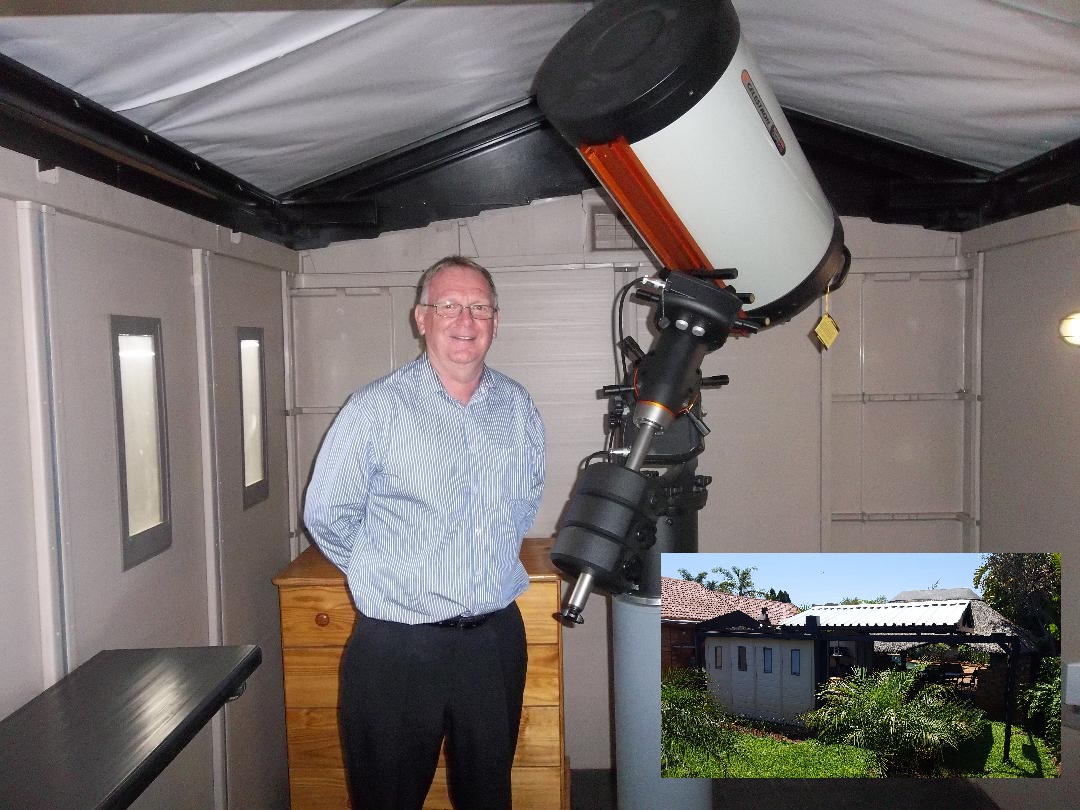 Measuring about 4,800 km (3,000 miles) across, Clyde’s Spot is one of several convective storms that occasionally erupt in Jupiter’s South Temperate Belt. Juno witnessed another such outbreak in 2018. 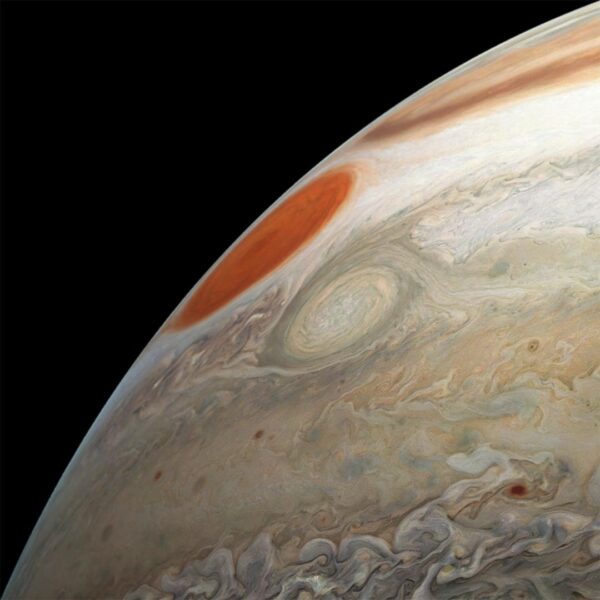 Juno captured “Oval BA” near the Great Red Spot on December 21, 2018. This composite combines three JunoCam images, taken when the spacecraft was between 23,800 and 34,500 miles away from the planet.
Enhanced Image by Gerald Eichstädt and Sean Doran (CC BY-NC-SA) based on images provided courtesy of NASA / JPL-Caltech / SwRI / MSSSSA

Amateur image processors really shine in their involvement with the Juno mission. The JunoCam imager was included on the mission mainly as a public outreach tool, as Juno’s primary mission is to probe Jupiter’s interior and magnetic environment.

Raw images from JunoCam are freely available on the mission website after each pass. Image processors have done a wonderful job combining the images, with often spectacular results. 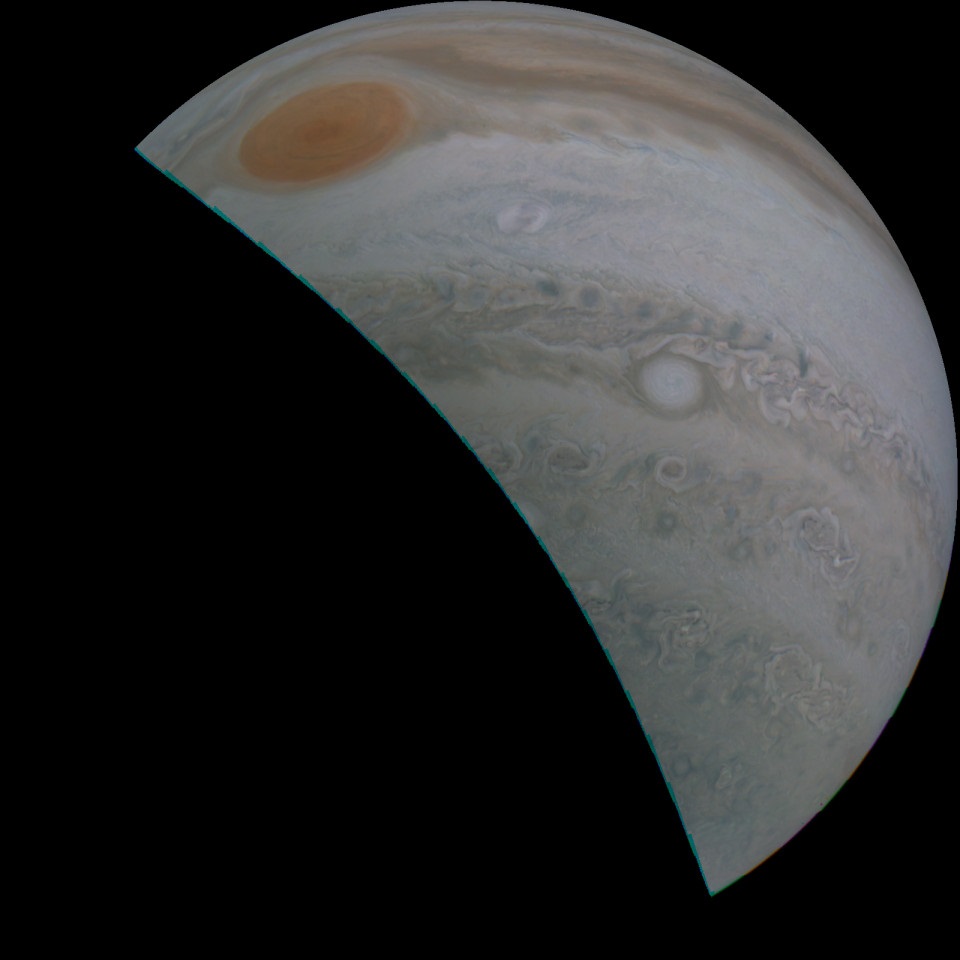 One of the raw images taken by NASA Juno on perijove 27.
NASA / SwRI / MSSS

Launched on August 5, 2011, Juno arrived in orbit around Jupiter on July 5, 2016, and has already exceeded the duration of its primary mission. An engine anomaly shortly after arrival resulted in a decision to keep Juno in a wider-ranging orbit, which also extended the mission’s lifetime. Juno is thus far the only mission to the outer solar system to operate using solar panels instead of nuclear power, and it’s now the only active mission in orbit around another planet beyond Mars. Mission scientists plan to operate the spacecraft through mid-2021.

Jupiter reaches opposition next week on July 14th, riding high to the south for Northern Hemisphere observers at sunset. The planet remains active and is an attractive target for observers this summer.

“The methane bright spot faded quite quickly,” Foster says, but that’s not all there is to see. “There is a dark spot/structure visible in amateur telescopes under good conditions currently present, and it remains to be seen if this will develop further.”

Congrats to diligent observer Clyde Foster on an amazing discovery. The story of Clyde’s Spot demonstrates how pro-am collaboration is alive and well at the eyepiece, online, and in orbit around Jupiter.