How would our solar system look from the vicinity of another star? Using technologies similar to ours, alien astronomers would have a tough time photographing our small, rocky Earth. They might more easily manage to capture images of our solar system’s biggest planets, the large gaseous worlds Jupiter and Saturn. Of the thousands of exoplanets discovered so far orbiting distant stars, earthly astronomers have captured direct images of only a very few. In each of these images, only one planet can be seen. Now astronomers say they’ve acquired a first-ever direct image of two giant exoplanets, orbiting a sunlike star.

The astronomers were using the SPHERE instrument on the Very Large Telescope (VLT) of the European Southern Observatory. The exciting peer-reviewed results were published in The Astrophysical Journal Letters on July 22, 2020.

This planetary system orbits the star TYC 8998-760-1. It’s 300 light-years away in the direction of the southern constellation Musca the Fly. The system seems to resemble our own solar system, but is much younger.

Here’s the young star TYC 8998-760-1, in the upper left. Astronomers blocked its light via a coronagraph; the bright and dark rings around it are optical artifacts (imperfections in the image, not part of the star itself). The 2 bright orbs in the center and bottom right are giant exoplanets, orbiting this star, 300 light-years away. This is the 1st time astronomers have directly photographed more than 1 planet orbiting a sunlike star. Image via ESO/ Bohn et al.

Alexander Bohn, who led the research, is a Ph.D. student at Leiden University in the Netherlands. He stated:

This discovery is a snapshot of an environment that is very similar to our solar system, but at a much earlier stage of its evolution.

While there are several methods for detecting exoplanets by how they affect their stars’ light during a transit or how their gravity slightly tugs at their stars, imaging them directly is still difficult due to the immense distances involved, even for large gas giant-type planets. According to co-author Matthew Kenworthy:

Even though astronomers have indirectly detected thousands of planets in our galaxy, only a tiny fraction of these exoplanets have been directly imaged. Direct observations are important in the search for environments that can support life.

Two other planetary systems had been photographed before with more than one planet each, but neither of the stars were sunlike. VLT had also photographed an exoplanet orbiting a brown dwarf – a type of “failed star” – back in 2004. This, however, is the first time that two planets have ever been imaged around a sunlike star. Maddalena Reggiani, a postdoctoral researcher from Belgium, said:

Our team has now been able to take the first image of two gas giant companions that are orbiting a young, solar analog. 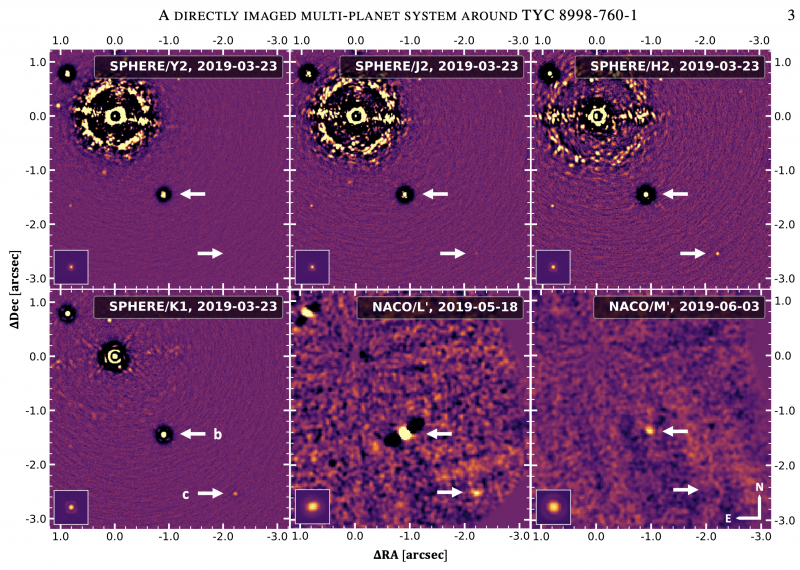 The two planets as seen through several filters on SPHERE and NACO. Image via ESO/ Bohn et al.

The TYC 8998-760-1 system seems to have a general similar appearance to our own solar system, but is much younger, only an estimated 17 million years old. That’s like being a toddler compared to our 4.6 billion-year-old solar system.

In the new image, the two planets can be seen as small, bright dots. The star is the larger and brighter “ring” in the upper-left of the image. It looks that way because the SPHERE instrument on VLT blocks the brightest light coming from the star using a coronograph. This way, the smaller and fainter planets can be seen. The researchers took different images at different times, and so were able to see the planets’ movements against the background of stars. 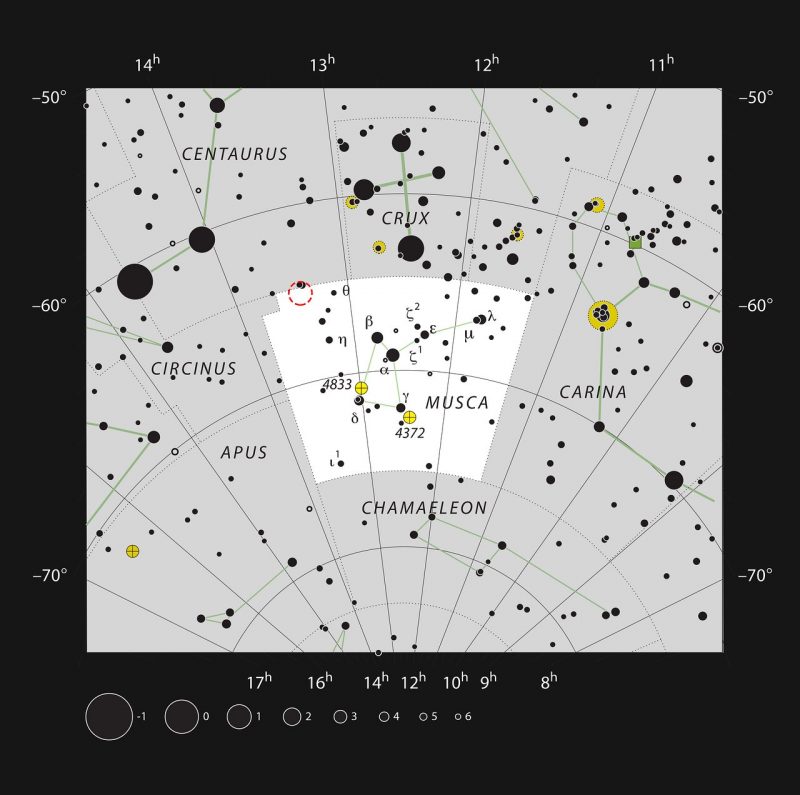 The location of the TYC 8998-760-1 system in the constellation Musca the Fly. Image via ESO.

It was also easier to image these planets because they are young, and therefore a lot warmer, making them glow brighter in infrared light.

The new planets were discovered as part of a search for giant planets around younger, sunlike stars.

Of course, the researchers want to continue to study these young worlds. One question they have is whether they formed where they currently are around the star or if they migrated from somewhere else in the system. ESO’s upcoming Extremely Large Telescope (ELT) will be able to help with this, as well as study how the two planets interact with each other. Bohn said:

The possibility that future instruments, such as those available on the ELT, will be able to detect even lower-mass planets around this star marks an important milestone in understanding multi-planet systems, with potential implications for the history of our own solar system. 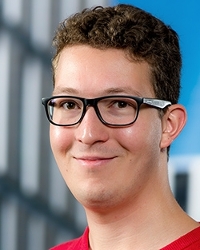 On June 3, 2013, ESO announced the successful imaging of the exoplanet HD 95086 b, also about 300 light-years away, which is another giant world four to five times more massive than Jupiter. It was also found using VLT. That planet orbits at its star at 56 times the distance from the Earth to the sun, and twice the sun-Neptune distance. The star is a little more massive than the sun and is surrounded by a debris disk, and like TYC 8998-760-1, is a very young star. It is estimated to be only 10 to 17 million years old.

In 2018, a congressionally-mandated report recommended that NASA lead the effort to directly image Earth-sized (or even Earth-like?) exoplanets using new and upcoming technologies.

The newest image is exciting since it is another step toward being able to actually photograph smaller alien worlds, such as super-Earths and planets about the same size as Earth. Will we eventually find another “pale blue dot“? 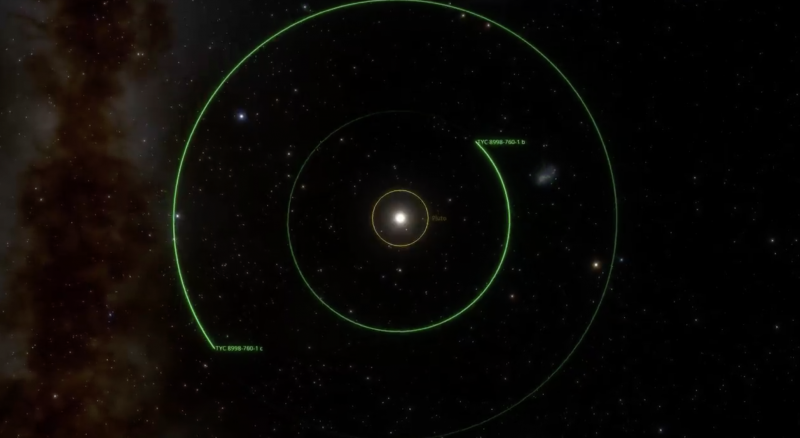 Bottom line: For the first time, astronomers have obtained direct images of two giant exoplanets orbiting a sunlike star. The star is TYC 8998-760-1, 300 light-years from Earth.